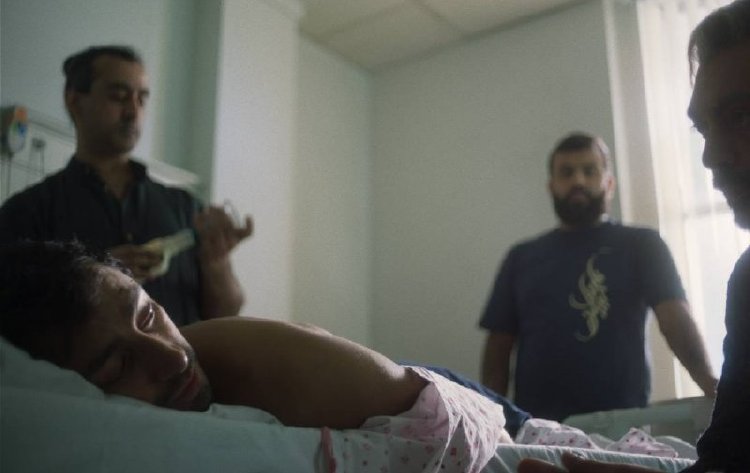 Zed (Riz Ahmed) raps about issues his expat Pakistani audience relates to so strongly, he’s on the verge of making it big.  That is all but confirmed when his manager Vaseem (Anjana Vasan) thrills him with the news that Dante Smith wants him to be his opening act on a tour beginning just a week after Zed wraps his own.  His girlfriend Bina (Aiysha Hart) reminds him of other priorities, like the family he hasn’t seen in two years, then leaves the man who hasn’t really faced his own legacy as a “Mogul Mowgli.”

Cowriter (with Riz Ahmed)/director Bassam Tariq’s feature film debut may initially sound like Ahmed’s last, “Sound of Metal,” in which a musician faces a life changing physical situation, but the similarities end there.  This fever dream of a film will be most appreciated by those, like Zed’s audience, with knowledge of such history as the 1947 Partition of India, as Tariq refuses to spoon feed his audience, building his character profile with childhood memories and adult nightmares.  While I appreciate the filmmaker’s dedication to his stylistic choices, a little more in the way of explanation would have made his film more accessible.  Still, Ahmed’s commitment to the intellectual, emotional and physical demands of this role make for a compelling character study.

The opening scene, shot in academy ratio from behind the performer looking out onto the crowd, gives us a sense of Zed’s appeal, his fiery discourse on identity and cultural legacy (‘I’m not putting down roots, I’m pulling up weeds’) set to infectious beats.  This is the last performance of a tour and the crowd is whipped up but Zed’s girlfriend, feeling neglected has had enough.   Her words have gotten through to him because Zed travels back to London to visit his parents.  While his mother, Nasra (Sudha Bhuchar), is proud of his burgeoning fame, his traditional father, Bashir (Alyy Khan), looks down upon his chosen path.  Then something utterly unforeseen happens when Zaheer (Zed’s birth name) accompanies his dad to a religious service.   Ducking out into a back alley to smoke a joint, Zed’s approached by an aggressive fan who berates him for passing the joint with his left hand and calls him a coconut.  The encounter gets physical and Zed awakens in a hospital bed.  His problem isn’t really due to those punches, though.  Instead they exacerbated a condition we’d noticed coming on as Zed experienced numbness is his legs, an autoimmune disease.  Doctor Maybury (Andrea Hart) tells him his white blood cells don’t recognize his body and are attacking his muscles.  There is no cure, but an experimental therapy involving stem cells may help.  It will also make him sterile.

And so a new conflict arises between father and son, Bashir bringing in shamans to try methods like cupping, the idea of sterility unfathomable.  Zed will eventually beg hospital administrators to throw his parents out.  He also frustrates Vaseem who is trying to book a substitute to cover the upcoming tour he insists he is still going on (RPG (Nabhaan Rizwan), another Muslim rapper, is the ‘obvious’ choice, but Zed loathes him and we can see why).

As Zed struggles to walk, Tariq creates a swirl of character definition with such images as Zaheer as a young boy peering out at his father on a train, feathers floating in the air (we assume this is them leaving India for Pakistan, but it also hints at the hereditary nature of Zed’s disease).  Zed is continually confronted by Tuba Tek Singh (Jeff Mirza), a Pakistani hidden by a facial veil of yellow, orange and pink flowers (the filmmaker does not tell us this is the title of a short story about asylum inmates being transported during the partition, a very useful bit of information in understanding the film’s last scene).  Zed engages in a rap battle in his hospital Johnny and delivers the final blow to his relationship with Bina from a sperm bank.


For information on playdates for "Mogul Mowgli," click here.