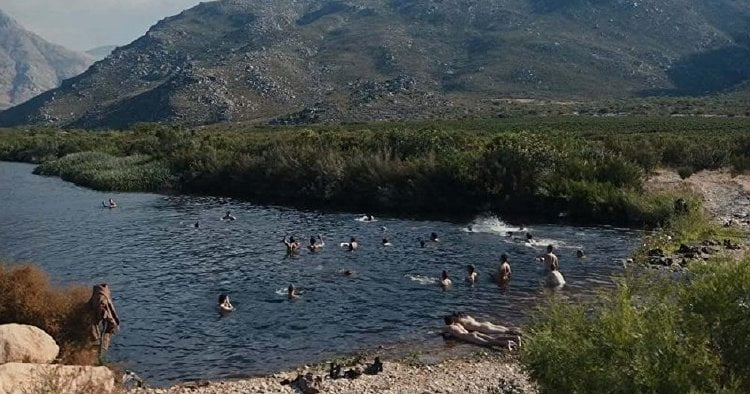 In 1981, if you were male and over sixteen in South Africa, you were required to complete two years of compulsory military service to fight for the Apartheid regime’s border war with the People's Liberation Army of Namibia.  If you were sensitive to the plight of Black Africans and homosexual, like Nicholas Van der Swart (Kai Luke Brümmer), you either hid that fact or were deemed the worst of the worst, a “Moffie.”

Cowriter (with Jack Sidey)/director Oliver Hermanus ("The Endless River") happens to be both Black and gay, so it is quite life affirming to witness the compassion he brings to his adaptation of André-Carl van der Merwe's iconic 2006 memoir.  The film, which is both unflinchingly brutal and often quite beautiful, lays a groundwork for understanding the white male South African mindset given the military’s harsh indoctrination into hate politics, where new recruits are known as ‘scabs’ and where ‘communism, faggotry and n-*&%$ sympathy are not tolerated.’

We’ve already seen an exhibition of the latter on the train journey to basic training.  As Nick silently recoils, his fellow recruits hang out the windows at a stop, screaming and jeering at an elderly Black man who stands stoically while also being pelted with garbage.  It’s a sickening scene.

After a hellish journey (composer Braam du Toit accompanies it with a struggling, groaning score), Nick is stripped naked, gay slurs rained down upon him, then threatened in his barracks by Snyman (Wynand Ferreira), a sneering brute who backs down when gifted with the girlie magazine Nick’s dad (Remano De Beer) pressed upon him back home.  Ironically it will be the strutting Snyman who will be the first brought back in a body bag when the young soldiers go out on their first mission to eradicate ‘communists.’

Nick is smart enough to keep his head down as the vile Sergeant Brand (Hilton Pelser) makes life hell for everyone.  He has a friend in his train compartment mate Michael Sachs (Matthew Vey), but something more raises its head when Brand leaves his unit to weather a rainstorm in the trenches they’ve dug and Dylan Stassen (Ryan de Villiers) suggests Nick comes closer.

Hermanus celebrates the beauty of these young men (the blond haired, blue eyed, chiseled Brümmer is an Adonis) with a scene of shirtless volleyball and another of nude swimming in natural splendor, both recalling Claire Denis’ “Beau Travail.”  Both are also shockingly, abruptly spoiled, the former when Baxter (Cody Mountain), recently beaten by his entire unit for homosexuality, uses his rifle on himself, the latter as Nick remembers a horrifying humiliation as a young boy at a public swimming pool.  When Stassen suddenly disappears, Nick approaches Baxter’s friend Hilton (Luke Tyler, "Chronicle"), recently returned from ‘the madhouse’ (the infamous military psychiatric Ward 22), to inquire about his whereabouts and is advised to ‘do whatever you can to stay invisible.’  ‘I’m not like you’ Nick insists.  And yet it is Stassen’s whereabouts that will continue to haunt Nick until he journeys to his home after his military tour.

That briefly hopeful but ultimately sad conclusion follows the film’s last act when the trainees are finally deployed to the border.  Nick will watch a man, a Black man, he shot breathe his last breaths and Hermanus’s simple, classical editing conveys a powerful sense of loss.  The joy his parents express upon his return, his mother (Barbara-Marie Immelman) grateful, his father celebratory, is one-sided.

In 1981, South Africa’s racist apartheid government was in full power, but that white supremacist power was starting to wane. Like all authoritarian governments, when things go wrong inside, you start a war outside. That war, in Angola, is shown through the eyes of a young white conscript with a dangerous secret in “Moffie.”

“Moffie” should not be pigeon-holed as a gay film (although the term is an Afrikaner slur against gay men). It is much more than that as it deals with critical issues of the time and place – apartheid, white nationalism and supremacist policies, racist expansionism, incursions into a foreign (coincidently, black) neighbor nation, machismo and, yes, homosexuality kept secret out of physical and psychological fear.

The protagonist of this unusual coming of age story is Nicholas van der Swart (Kai Luke Brummer), a quiet, gay teen who must undergo the dehumanization of mandatory military service in the South African Defense Forces. Keep in mind, the SADF was made up of all white men at this time and the training was geared to “kill the blacks” in the expansionist war with Soviet-backed Angola – making for an interesting history lesson, too.

Life as a conscript in the SADF was bad enough with the abuse and punishment administered by the sergeants and corporals tasked with “training” the men. Add to this the violence inflicted on those soldiers deemed gay and the stigma and worse abuse they had to endure and you get a not very pretty picture of life in South Africa during apartheid.