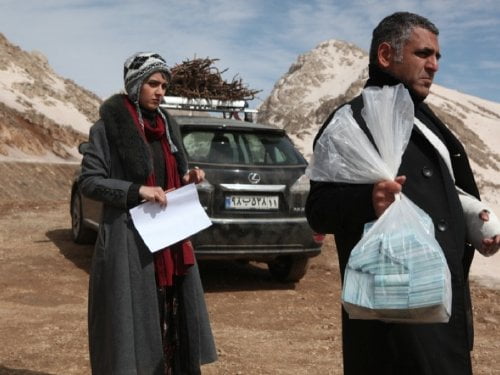 A couple approaches the border between Iran and some unknown neighbor in their new Lexus SUV. The young border guard is perplexed by their arrival, especially as they argue and completely ignore him. He is even more confused when they give him two plastic bags full of money and drive of into the mountainous land. Why? That is what writer-director-star Mani Haghighi wants us to try and figure out the couple receives a “Modest Reception.”

Kaveh (cowriter (with Amir Reza Koohestani)/director/star Mani Haghighi) and Leyla (Taraneh Alidoosti, "About Elly") are a handsome Tehranian couple driving a fancy Lexus SUV through the rural, mountainous, border region of Iran. After playing some border guards with a flurry of bank notes, when they spot an old man (Esmaeel Khalaj) running a roadside stall, they attempt to give him a large plastic bag full of cash, but he is the first of their encounters who gives them only a "Modest Reception." This highly provocative film announces that yes, after recent films by Asghar Farhadi ("A Separation") and Maryam Keshavarz ("Circumstance"), Iranian cinema is experiencing a second wave. Even the older guard are making film's more openly critical of their homeland (Panahi's "This Is Not a Film," Ghobadi's "No One Knows About Persian Cats"). Haghighi is a sophisticated new voice, one who can keep us riveted to his screen as he balances comedy and tragedy while wrapping an enigma in a mystery. We don't ever really understand what this couple is up to, except that increasingly, their attempts to give away large sums of money are partnered with humiliating demands. That old man confounds them when he proclaims that he has an adequate living and is highly suspicious of their largesse. He's left worse off than they found him. A man with a mule with a broken leg is lied to, his animal left to suffer in pain. Two truck driving brothers are told they've won the lottery, only to have one pitted against the other. A poor man attempting to bury his dead infant has his religious beliefs called into question as Kaveh taunts him with money. Ominously, we hear a helicopter flying overhead, although Haghighi never cuts to it, nor is it commented upon. This could conceivably be a metaphor for foreign 'aid.' He and Alidoosti are fantastic together, conspiring, sniping, laughing. We can presume they are married, but that is unclear as well. After two days on the road with them, we learn they have only succeeded in ridding themselves of thirty-two of their two hundred sacks of cash. Kaveh and Leyla are like Iranian 1% asps trying to corrupt a garden, if not of Eden, at least of decency. The film's production is stunning, cinematographer Houman Behmanesh celebrating the beauty of the area while also providing low down points of view from the Lexus's windshield. The score is also unexpected, modern jazz as out of place in this landscape as this bizarrely motivated Tehranian couple. At another border crossing just like where they started, a final act of violence, ironically, could be their redemption.

I am not entirely sure what Mani Haghighi is trying to tell us with his original black comedy as the couple, Leyla (Taraneh Alidoosti) and Kaveh (Haghighi), drive into the remote, stark landscape of the mountains of Iran. After the incident at the board, the pair meets an old man living in what amounts to a tent made out of scrap plastic. They try to give him a bag of money, alms for the poor they tell him, but he indignantly refuses the bounty. “Give it to someone who needs it,” he tells them. They race off, tossing a bag of rials out of the car at his feet. It soon becomes clear that they are on a mission to give away 200 sacks of cash. Again, we are not told why, making the ambiguity of the story intriguing. Besides the dark humor of the film, there are also some not so savory elements to the story involving, in one case, a mule suffering from a broken leg and, another, a man grieving for his just-died baby girl. The main characters’ motivation for their philanthropy is never clear and, at times, treated as a joke by Leyla and Kaveh. But, the filmmaker keeps you wondering to the end as to just what they are up to. Somehow, the ambiguity is satisfying.