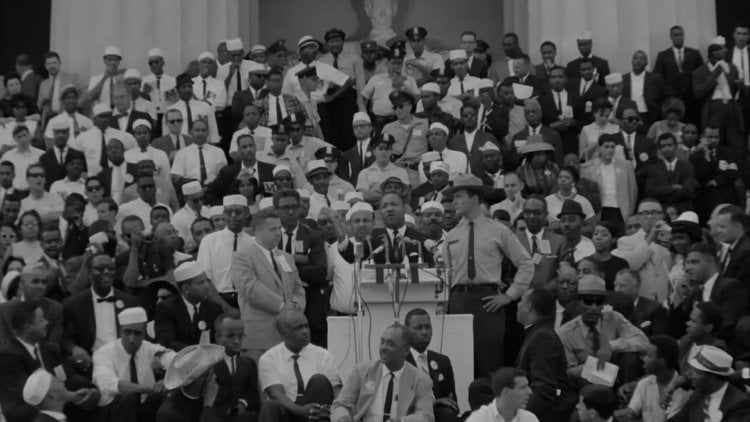 For anyone familiar with America’s modern history, it is known that FBI director-for-life J. Edgar Hoover had a “thing” against Martin Luther King, whom he termed “the most dangerous Negro in America.” Doc-maker Sam Pollard, accessing recently declassified FBI files about that “thing,” gives us the facts on “MLK/FBI.”

Back in the Civil Rights era of the 1960’s, Martin Luther King was regarded as a true leader, a man who espoused peaceful protest.  But a right-wing FBI was already looking at civil rights protestors as Black people fomenting Civil War so when a wiretapping proved that King was still consorting with a communist he’d promised the Kennedy Brothers he’d cut off, J. Edgar Hoover flipped out, believing the man a threat to national security.  The FBI would go far beyond the wire tapping effort they got Robert Kennedy to sign off on as outlined in “Mr. Soul!” director Sam Pollard’s “MLK/FBI.”

It’s funny how the reputation of the Federal Bureau of Investigation changes with the times, but it was certainly a suspect organization under the command of J. Edgar Hoover, especially in his latter years.  James Comey tells us he felt sick to his stomach reading the letter the FBI sent to King and his wife, suggesting King commit suicide, calling it the FBI’s darkest chapter.  Pollard’s examination of Case file 100-106670 is a reminder of the days when the FBI kept files on anyone who didn’t fit their right wing viewpoint, folks like John Lennon and anti-war protestors.

But while this is certainly a piece of history worth revisiting, Pollard’s documentary trots out the most notorious accusation made against King, a recording in which it appears King looks on and laughs while a woman is raped in a church by a bishop and leaves it hanging, neither confirming nor denying events, suggesting that great leaders are not always perfect men.  But this is followed by a shocking admission from the FBI regarding his assassination when an agent asks the valid question as to why they did not intervene if a crime was being committed while they were within surveillance distance.  Would this not have also been the case in during the prior recording?  And yet Pollard expects a modern audience to be surprised to learn that at that time, most would side with Hoover over King.

Inconsistencies like this aside, “MLK/FBI” does a good job of laying out the zeitgeist and providing details, like how uncovering the existence of a mistress in King’s life led the FBI to change tactics, leaving national security concerns behind in order to paint him as a deviant.  It is yet another sad document of the Black experience in America.  Furthermore, the FBI has been accused of destroying sensitive documents about King and his assassination.  They were ordered sealed for fifty years, to be released in 2027.

For anyone familiar with America’s post-1950 history, it is a known fact that FBI director-for-life J. Edgar Hoover had a “thing” against civil rights leader Martin Luther King, whom he termed “the most dangerous Negro in America.” Documentary-maker Sam Pollard, accessing recently declassified FBI files about that “thing,” gives us the detailed evidence in “MLK/FBI.”

I happen to be familiar with American history and, in particular, about the FBI surveillance, wiretapping and harassment of MLK, the dirt they stirred up and the innuendo and lies they spread. Director Pollard, with writers Benjamin Hedin and Laura Tomaselli, take my previous knowledge and inject it with a steroid of previously unseen surveillance information on King.

This period has to rank as one of the most shameful harassment campaigns ever performed by the FBI (especially considering their motto: Fidelity, Bravery, Integrity). Fortunately, even with the current occupant of the White House trying to destroy it (and democracy); the FBI has worked hard to regain their state of grace.

It was in the fall of 1963 that US Attorney General Robert Kennedy ordered the FBI to wiretap the telephone lines of Martin Luther King. That investigation was intended to be only limited, at first, but director Hoover unshackled the investigative power of his Bureau for a full-blown invasion of every aspect of King’s life, including recording his extramarital affairs.

One of the (many) amazing things revealed here is that, even after King’s untimely assassination in 1968, Hoover’s investigation continued against Black activism in the US into the 70s. I appreciate Sam Pollard and his stalwart documentary team in bring all of the new information to light in a well-told and concise documentary about our history – and how, unfortunately, it continues to repeat itself.