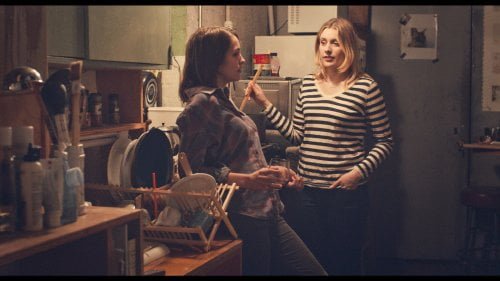 Tracy's (Lola Kirke, "Gone Girl") first college semester in New York City isn't going the way she thought it would. She's been denied entrance into the Mobius Literary Society and her writing buddy crush Tony (Matthew Shear, "While We're Young") suddenly appears with a girlfriend in tow. When she tells her mom (Kathryn Erbe, TV's 'Law & Order') that she feels like she's at a party where she doesn't know anybody - all the time, mom suggests she call her fiancé's daughter Brooke (Greta Gerwig). Reluctantly, Tracy does and suddenly adventures abound with the thirtysomething Times Square denizen and general woman-about-town who dreams of being "Mistress America."

Cowriter (with muse and star Greta Gerwig)/director Noah Baumbach follows up his first Gerwig-inspired film, the joyous "Frances Ha," with another look at female friendship that is less rose-tinted and tonally consistent. Where the guileless Frances always somehow floated to her feet, Brooke is bordering on desperation and the film's abrupt switch from character-driven comedy into a slamming door farce feels like these players suddenly decided to put on a play, adding cast all trying to hit their marks while layering their lines over each other. Thankfully the lines being lobbed about are full of wit, but the film's tonal switch is awkward as is Tracy's sudden reversal on her new friend. Gerwig is a delight as Brooke, a woman who obsesses over making first impressions while realizing that she's quickly running out options. Unlike Frances, the aspiring dancer who didn't have enough talent to make it in the big city, Brooke has flitted from one idea to the next. Our first meeting of her is telling. She's the type who calls back missed phone calls from unknown numbers. In the flesh, she stages her entrance, wobbling down the Times Square bleacher stairs announcing 'Welcome to the Great White Way!' The self-proclaimed autodidactic talks about a Greek boyfriend, fronts a band and has a centrally located apartment, but the boyfriend is never seen, her real job is running a spin class and her apartment is illegally zoned. Tracy's pulled into her latest scheme, opening a restaurant which will also be an art space, community center and sometime hair salon. When the mysterious boyfriend pulls his backing of her investment stake, Brooke decides her best option is to visit her wealthy ex-fiancé Dylan (Michael Chernus, "Captain Phillips," "Aloha"), 'stolen' by Mamie-Claire (Heather Lind, TV's 'TURN: Washington's Spies') who also made a fortune absconding with her tee shirt idea. A road trip ensues, breaking the film into its two halves. Tony's enlisted to drive and his suspicious girlfriend Nicolette (Jasmine Cephas-Jones, Broadway's 'Hamilton') comes along to keep an eye on him. They arrive at Dylan's glass walled Greenwich mansion to find a startled Mamie-Claire in the midst of hosting a pretentious book club and by the end of an afternoon's rambling about the house many facades will be stripped away. While Gerwig's constant crazy is fun, it's a bit more difficult to warm up to Kirke's Tracy, whose unassuming nature cloaks passive aggression. We're prepared to dislike Dylan, but Chernus imbues him with complexity making him astute and oddly likable. Cindy Cheung ("Obvious Child") adds a bright top note as an abandoned guest thrown into the third act mix. Cocomposer Dean Wareham, who played "While We Young's" shaman, is a hostile Greenwich neighbor. Rebecca Henderson ("Appropriate Behavior") makes a mark as an old classmate of Brooke's who confronts her over past behavior. "Mistress America" is another of Baumbach's explorations of the struggle to define oneself via professional success, but its many sharp and funny insights are stuffed into an off kilter structure. Grade:

Tracy (Lola Kirke) has landed in NYC to attend college. She has no friends and leads a lonely existence at school. Her mother, who is getting married again, suggests that she call her stepsister-to-be Brooke (Greta Gerwig). She does but is not prepared for the bundle of energy that is Brooke in “Mistress America.” Noah Baumbach, with his co-writer muse and star, Gerwig, (they co-wrote the director’s last film, also starring Greta, “Frances Ha”) tells the story of Tracy and Brooke as they bond over their upcoming sisterhood. The two are polar opposites in personality with Tracy the serious student and fledgling writer and Brooke a free-spirited, ambitious idea girl with dreams of being rich and famous. Gerwig is a powerhouse of conflicts as Brooke. She blames others for the failures in her life, obsessing over her former friend and current nemesis, Mamie Claire (Heather Lind). You should not like here at all but Gerwig brings such energy to the role that you sort of forgive Brooke for her many foibles. Tracy sees Brooke as larger than life and believes her pipe dreams, the latest in a long list is to open a trendy restaurant. This brings us to Brooke and her entourage of Tracy, Tony (Matthew Shear) and his girlfriend Nicolette (Jasmine Cephas Jones) as they head to Bridgeport, Connecticut with Tony reluctantly at the wheel. Brooke is there to confront Mamie Claire who stole, she claims, her fiancé, her business idea and her cats. This is where the film becomes drawing room farce with lots of slamming doors and rapid patter dialog. “Mistress America” is not the best of Baumbach film but it is entertaining little film with a standout performance by Greta Gerwig.