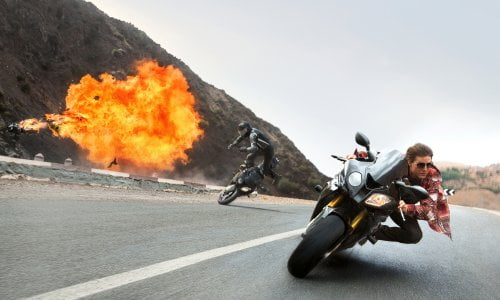 With Ethan Hunt's (Tom Cruise) IMF about to be dismantled, he discovers proof that a mythologized group of free agency spies has formed The Syndicate, intent on destabilizing global society. With no official backing, it is up to Hunt to take on "Mission Impossible: Rogue Nation."

For his fifth turn as Hunt, Cruise has teamed up with his "Jack Reacher" writer/director Christopher McQuarrie to deliver one of this franchise's best. At fifty-three, Cruise is finally beginning to look something approaching his age and his Hunt is very vulnerable here, having to be saved twice, the physical punishment of being literally brought back from the dead seriously affecting his high speed chase abilities. Ethan's "Ghost Protocol" team is back (and watch for that rabbit's foot), analyst Brandt (Jeremy Renner) now the guy calling the shots, but this film belongs to Swedish actress Rebecca Ferguson (2014's "Hercules") as undercover British Intelligence agent Ilsa Faust, whose career is sure to get a serious boost after her fearless performance here. She's mature enough to be paired with Cruise with a natural sex appeal and believable bad assitude. Just after Hunt's pulled off the impossible, boarding an Airbus 400 from the outside in mid-air to retrieve a pallet of nerve gas, Brandt is called to the carpet at a Senate hearing with far-from-supportive CIA Director Alan Hunley (Alec Baldwin) and the IMF is official over, Brandt and computer tech Benji (Simon Pegg) subsumed into Hunley's organization. In London, Hunt's IMF hookup is infiltrated by Syndicate leader Solomon Lane (Sean Harris, "Control," "Prometheus"), but just as he's being given the going over by the infamous Bone Doctor (Jens Hulten, "Skyfall"), he's saved by Ilsa. Is she a Syndicate member with an unknown scheme or undercover? As he undergoes lie detector tests to prove otherwise, Benji continues to support Hunt, flying out to Vienna to help the outed agent find Lane. McQuarrie tips his hat to Hitchcock's "The Man Who Knew Too Much" as Hunt leaps about opera house rafters, Ilsa and two others aiming for Austria's head of state. Ilsa and the IMF guys make their getaway, but Hunley's now ordered Hunt's death sentence. Hunt needs proof, Lane's computer drive listing renegade agents and untraceable billions worldwide. It lives in an underwater storage facility with unimpeachable security. With Pegg providing the comedy (he's disguised as a haystack in the film's first scene), Cruise goes all out, holding his breath in a fast moving underwater cooling system, leaping off buildings, smashing up a BMW sedan and taking one of their 1000r sports bike almost to the ground manipulating Moroccan mountainside switchbacks. Harris proves one sociopathic villain, so lethal he's almost impossible to out maneuver (McQuarrie's stealthy screenplay helps too). Renner's surprisingly sly here as well. As Luther, Ving Rhames is mostly left out of the action but imposing in his protective threats. The film also stars Simon McBurney ("The Theory of Everything") as the duplicitous head of British Intelligence and Tom Hollander ("In the Loop," "The Invisible Woman") as the British PM Hunt's forced to kidnap. McQuarrie's may not be the most stylish looking production, but he mostly keeps his foot slammed on the action pedal, a bit of drag introduced in the film's last act. Returning cinematographer Robert Elswit nails one breathtaking shot of Ferguson ascending the Vienna Opera House stairs in stunning yellow silk and towering heels. Grade: