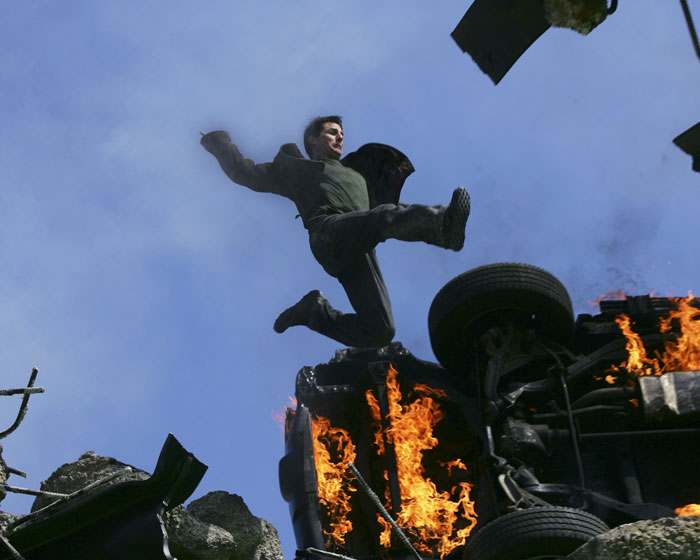 'We put an explosive in your head.' Philip Seymour Hoffman as Owen Davian

When Secret Agent Ethan Hunt (Tom Cruise) marries Julia (Michelle Monaghan, "Kiss Kiss Bang Bang") she has no idea about the dangers of his work with IMF and no clue she is about to become the target of the most heinous villain Ethan's ever faced, amoral trader in weapons and information Owen Davian (Philip Seymour Hoffman, "Capote"), in "Mission: Impossible III." The third time's the charm for this Tom Cruise vehicle and oddly enough, after going through directors Brian dePalma and John Woo, it is television maestro J.J. Abrams ("Felicity," "Alias" and "Lost") who is finally able to crank this thing into action. Having recent Best Actor Oscar winner Hoffman along for the ride certainly doesn't hurt, but he's far from the single handed savior of this film. This time around, Ethan's being dragged back into the field by button-pushing department head John Musgrave (Billy Crudup, "Stage Beauty"). Hunt has fallen in love, and so has become an IMF trainer in order to enjoy a 'normal' life. But on the eve of his engagement party, Musgrave informs him that the first recruit he recommended for action, Lindsey (Abrams alumnus Keri Russell, TV's "Felicity"), has been off the grid for eleven hours, presumably kidnapped by Davian in Berlin. Ethan has misgivings, but surprises the old gang by showing up for the mission. Julia thinks he's gone to a traffic planning convention. Berlin's the first of four big action sequences with Russell looking quite resourceful with a weapon and a gung-ho Jonathan Rhys Meyers ("Matchpoint") piloting a copter through a wind farm, but the mission is a tragic failure and when Ethan returns home Julia cannot help but know something is wrong. With her unhesitating trust in his heart, Hunt is determined to take down the terrorist who killed his protege, but accomplishing the impossible isn't enough when the bad guy has protection from his own side. Abrams (who cowrote with "The Island" screenwriting team of Alex Kurtzman and Roberto Orci) was smart to give Hunt an emotional raison d'etre and the character's career decision gives him a layer of connection with his IMF cohorts, who all weigh in on the subject. Luther Stickell (Ving Rhames, "Dawn of the Dead" and the only other returning series cast member) is adamant that Hunt cannot marry - until he is caught short with news of Ethan's secret marriage. There's wit to this script (and a brilliant placement of Sister Sledge's "We Are Family") while it both cleaves to the TV series (those self-destructing mission instructions! those masks!) and diverts from it (the motivationally retargetted and played straight "True Lies" twist at its core). The cast is beautifully assembled. While Hoffman is left without a back story (a major disappointment for what easily could have become one of the greatest screen villains ever), he's such a fiendishly good actor he still fills the screen with malevolent presence. (The film's first line of dialogue, quoted above, is chilling read to a black screen.) Laurence Fishburne is intimidating as the tough IMF chief who may be behind Hunt's troubles. Rhames and Rhys Meyers nail the team repartee while Maggie Q adds the glamor and "Shaun of the Dead's" Simon Pegg is a bright note of comedy as technician Benji, giving bluff to the film's MacGuffin ('the rabbit's foot') with his offhand speculations of doom. Michelle Monaghan, in her best role to date, offsets IMF's world of villainy and violence with a brilliant, believable purity. It's a well known fact that Tom Cruise is obsessed with doing his own stuntwork and he really delivers the goods this time around, flinging himself from buildings, flying about on tethers and flattening himself under jackknifed trucks. Tom Cruise may have an edge of craziness about him, but there is no denying he is an impressively capable daredevil. "Mission: Impossible III" starts off summer 2006 with a bang. It's a popcorn movie with some meat on its bones.