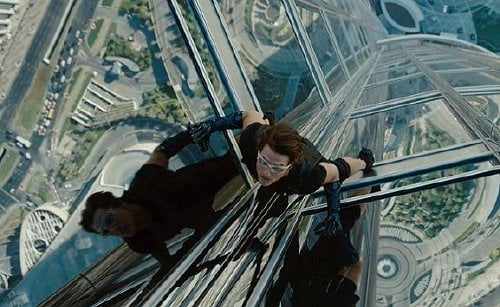 After IMF Agent Hanaway (Josh Holloway, TV's 'Lost') is lost trying to transport Russian nuclear launch codes in Budapest, Impossible Missions Force operatives Benji (Simon Pegg, "Shaun of the Dead," "M:I-III") and Jane (Paula Patton, "Jumping the Broom") break Ethan Hunt (Tom Cruise) out of a Moscow prison along with a 'passenger.' But Hunt's first mission back involves getting into the Kremlin just when a suspicious explosion brings U.S. Soviet tensions to a Cuban Missile Crisis high. The IMF Secretary (Tom Wilkinson, "In the Bedroom," "The Green Hornet") instructs Hunt to go rogue after the President of the United States issues "Mission: Impossible - Ghost Protocol."

Director Brad Bird, known for animations like "The Iron Giant" and "The Incredibles" makes his foray into live action films by dangling Tom Cruise off Burj Khalifa, the world's tallest building. It's been five years since Hunt got married and tried to retire in the third edition and Bird, whose entry isn't quite as quickly paced as one might expect, nonetheless gets the franchise back on track by both looking forward and back. We're clued in immediately that communications expert Benji will provide the film's comic relief as he plays games with Russian guards and prisoners by remotely unlocking and relocking interior prison gates while blaring Dean Martin's 'Ain't That a Kick in the Head.' Ethan throws him off by going off plan, and Jane, working the exit strategy beneath the facility, discovers she's got two people to transport out - Ethan's gone in to retrieve prison friend Bogdan (Miraj Grbic). After entering the Kremlin disguised as a Soviet General, Hunt comes out dressed as a tourist just in time to be leveled by a bomb last. Out of the hospital and into the Secretary's limo only to learn the Commander in Chief has disabled IMF (that's Ghost Protocol) before the Secretary is killed and Hunt must get away with the man's analyst, Brandt (Jeremy Renner, "The Hurt Locker"), as soon as they can get out of the submerged vehicle under Soviet fire. And you thought Jack Bauer had it bad... As written by Josh Appelbaum & André Nemec (TV's 'Life on Mars,' 'Happy Town'), this fourth installment is a mix of old and new with Soviet/U.S. tensions being worked by a nuclear extremist - it's a Cold War background with a New Age terrorism foreground. "Mission Impossible" has always been about extreme situations and impossible disguises, but one wishes the writers had filled in the gaps between their set pieces a little better, especially seeing as how Hunt's team is working here without a net - just how do these wanted guys get from Moscow to Dubai with no support of any kind? Bogdan's introduction doesn't have much of a later payoff either. Bird and producer Cruise work their much publicized central locale, the 160 story Burj Khalifa tower, using it for not one, not two, but three separate vertigo inducing stunts. Cruise crawls up the outside of the building, swings back down it and the open space created for exit/entry yawns behind many scenes, including a tussle between Jane and Sabine Moreau (Léa Seydoux, "Inglourious Basterds," "Midnight in Paris"), the assassin who took out her lover in the pre-credit sequence. On an IMAX screen, these scenes must make one's stomach drop (IMAX equipment failed at my screening, which was moved to a regular theater). There's also a chase between Hunt and the bad guys who get their codes for the second time through a sandstorm followed by the ultimate over-the-top countdown scene to nuclear annihilation. In between all the action there's a bit of drama about just who Brandt really is, a bit of sex and glamor when Jane's sent in to seduce the fabulously wealthy Brij Nath (Anil Kapoor, "Slumdog Millionaire") and some Cold War warmup as Hunt tries to convince Soviet cop Leonid Lisenker (Ivan Shvedoff) that they're really on the same side. The film wraps nicely with some surprise cameos from previous installments. It's amusing that with the American remake of "The Girl with the Dragon Tattoo" opening next week, that the original film's Salander is paired with Sherlock Holmes and her Blomkvist is nuclear extremist Cobalt (Michael Nyqvist) in this film the same week. He doesn't make anyway near the impression Philip Seymour Hoffman made as III's bad guy, but he still acquits his villain nicely, selling his nihilistic philosophy with chilling calm. It's hard to register Patton as the lesbian teacher of "Precious" as she kicks butt here with authority and Renner works his back story well with a goodly amount of justified terror at getting back into the field. And Cruise? Just shy of fifty and he's still more daring than most stunt men. He owns Ethan Hunt whether he's under a pound of makeup swinging around from 2700 feet or projecting emotion across a moonlit bay. As producer of the last two of this series, just how will he top himself for the next?