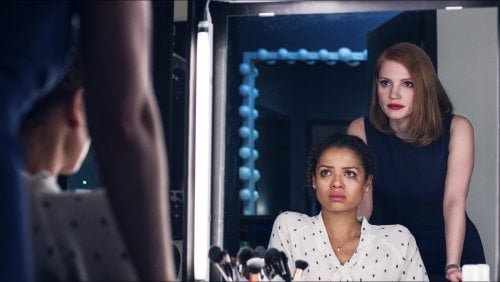 Elizabeth Sloane (Jessica Chastain) is a high level Washington lobbyist whose motto is to do whatever it takes to win. When she switches sides to go against the powerful gun lobby, she takes on her greatest challenge and must fight for her political life to achieve her primary goal in “Miss Sloane.”

With director John Madden and a great cast, with Jessica Chastain leading the veteran thesps (including but not limited to Gugu Mbatha-Raw, John Lithgow, Michael Stuhlbarg, Mark Strong and Sam Waterston), “Miss Sloane” should be a sure fire hit as an economic and political thriller. The script, by newcomer scribe Jonathan Perera, is not quite up to the caliber of artists in front of and behind the camera. I am not saying that the story is flawed, though it might be, but it is a glossy coverage of a serious issue told in black and white terms. Liz is a successful and hard-nosed lobbyist whose talents are sought by many, whether they are on the conservative right (or far right), or the liberal left. She drives the effort to keep the current, mostly unregulated, firearms industry free to do business as usual – until she is ordered, by her boss, George Dupont (Sam Waterston), to push the female market to buy guns. This proves too much, even for the totally pragmatic Liz. She jumps to the pro-gun control side, taking some of her staff with her, and begins to push for such reasonable measures as national owner registration, confiscation of illegal guns and requiring a waiting period to buy a weapon. This liberal agenda proves too much for her powerful opponent, finance by the NRA, and a battle of wills and dollars begins between the Goliath gun lobby and the diminutive David, played with cold calculation by Chastain. I think that the term “cold calculation” is the key here. The story never develops beyond the manipulative control of Liz in meeting her goal to win. As such, there is little sympathy, and no empathy, toward the title character as she relentlessly follows her own, well-defined path. The excellent cast helps to drive the predictable story to its inevitable conclusion – forecast early on in the guise of, at first, an unidentified investigation of Liz’s conduct. The actors do a good job of inhabiting their characters but they are uniformly two-dimensional. I looked forward to seeing “Miss Sloane” on the merit of its star, Jessica Chastain, whom I am never disappointed to see. She is the persona of Liz Sloane as the lobbyist shark but does not get the chance to go beyond the ice queen who lacks real humanity.