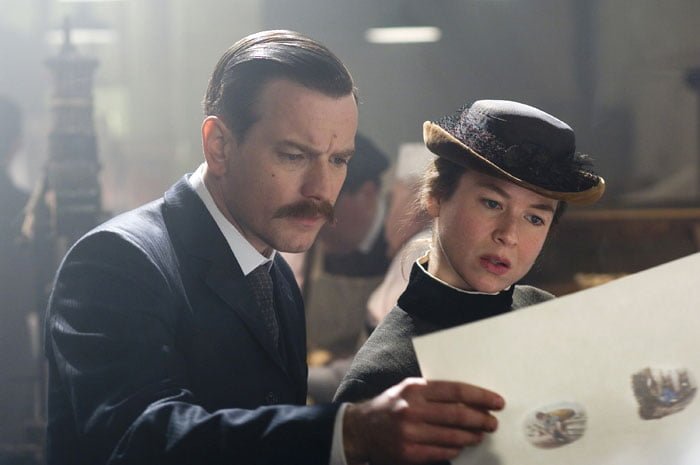 In Victorian England a single, middle-aged woman went against the grain, writing children's books illustrated with her drawings of anthropomorphized farm animals and leading a national preservation effort to keep developers out of England's Lake District. Her name was "Miss Potter."

"Babe" director Chris Noonan returns after a long hiatus, this time focusing his camera on the person who would talk to the animals rather than the talking animals themselves. Beatrix Potter (Renée Zellweger, "Down with Love," "Cinderella Man") led an unusual life and left a diverse legacy, but as scripted by Richard Maltby Jr. a weird concentration on latent lesbianism is misplaced and distracts from the central story. Potter is introduced as an eccentric who speaks to her animals through the drawings she has made of them (the drawings become animated under her gaze). Her indulgent dad, Rupert Potter (Bill Paterson, "Comfort and Joy," "Amazing Grace"), encourages his daughter's artistic bent, but all her social-climbing mother (Barbara Flynn, TV's "Cracker") sees is an unwed woman. Trailed by her much older chaperone Wiggin (Matyelok Gibbs, "Babel," "Copying Beethoven"), Beatrix makes the round of publishing houses with her little tale of Peter Rabbit and finally engages the interest of Warne Publishing, but only, she soon discovers, to create a first project for younger Warne brother Norman (Ewan McGregor, "Down with Love," "Stay") who is intent on joining the firm. Norman is enchanted with Beatrix's work, though, and pours his all into creating a perfect book. 'The Tale of Peter Rabbit' becomes a runaway bestseller and Potter becomes a mainstay at the Warne residence where she becomes fast friends with Norman's sister Millie (Emily Watson, "Breaking the Waves," "Separate Lies"), another determinedly single woman. Beatrix aggravates the parental divide when she invites Norman and his sister to her mother's Christmas party. Mother is indignant that a common tradesman cannot mix with the titled gentry she curries favor with, but father supports her, at least until Beatrix accepts Norman's proposal of marriage, a decision which both parents are set firmly against. A typical deal of a cooling off period is agreed to and Beatrix accompanies her parents to the Lake District where she purchases Hill Top Farm in anticipation of her wedding, but after tragedy strikes she retires there alone, reemerging as a preservation activist. Zellweger, forging a career from playing single British woman, is in excellent form as the somewhat wiggy Potter, whose feet appear on the ground even as her imagination soars out of bounds (Little Lucy Boynton gives the young Beatrix an air of serious curiosity). McGregor is terrific as her humble suitor, a restrained, mustachioed riff on his more passionate but equally wide-eyed (and doomed) period performance in "Moulin Rouge!." Also terrifically engaging is Phyllida Law ("Saving Grace," "Copying Beethoven") as the warm wheelchair bound Warne matriarch. Oddly directed, though, is Emily Watson, whose dissertations on single womanhood include the pointed need of a female 'friend' and whose gracious retractions at Beatrix's engagement to her brother precede a look of utter disappointment. Beatrix may seem oblivious, but what are we to make of an extended visit that finds the two women alone at Hill Top? The pairing of Zellweger, with her mottled cheeks and bee stung lips, and Watson, with her unnatural forehead, draws additional attention to an unconventionality. Still, the bulk of Potter is charming, from the sweet romance and its comical chaperoning to the odd interactions of Potter and her artwork (Noonan uses this device with particular force when her characters desert the pages Beatrix flips through at her lowest ebb). Britain's heritage of both the world's most popular children's book series and 4,000 acres of unspoiled farmland is a testament to a unique woman whose story "Miss Potter" illuminates, if with odd shadows.