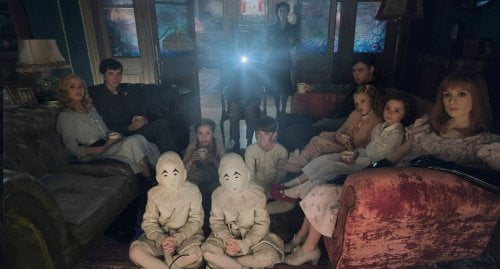 Abraham Portman (Terence Stamp) has fascinated his grandson Jake (Asa Butterfield, "Hugo," "Ender's Game") with tales of his adventurous past escaping monsters and pictures of the special children he grew up with. Jake's dad (Chris O'Dowd, "Bridesmaids"), never close to his father, says they're flights of fancy and the old man's dementia appears to bear this out. But when Jake responds to Abe's distress call and finds the old man near death with his eyes plucked out, Abe's last words point him to "Miss Peregrine's Home for Peculiar Children."

Ransom Riggs was so fascinated by a bunch of vintage photographs, he wrote his first YA novel around them, so it would appear a match made in heaven for director Tim Burton, known for his whimsically Goth-tinged production design, to bring it to the screen. But Riggs' novel proved an overworked hash of mythology, time travel and coming-of-age, like "Harry Potter" meets "X-Men" with WWII wormholes. Jane Goldman's ("Kick-Ass," "Kingsman: The Secret Service") adaptation does it no favors, stripping it of character in order to stuff the unwieldy plot into a reasonable running time (the ending is changed considerably, allowing Burton to do a stop motion homage to Ray Harryhausen). It's easy to see why Burton was drawn to material developed from freaky pictures, but this is simply the worst thing he's ever committed to celluloid (or hard drive). After his grandfather's death, loner Jake is troubled by nightmares, so his parents (Kim Dickins is wasted as his mother) send him to Dr. Golan (Allison Janney, tipping her hand in minuscule screen time) to work through his grief. After finding a postcard from Miss Peregrine from Abe's old children's home dated just two years prior, Jake wants to visit. When Dr. Golan says it's actually a good idea, father Franklin agrees to take him to Cairnholm on an island off the coast of Wales. During their voyage, they see a peregrine flying overhead. With dad busying birding, Jake traipses across the island, but the once ornate Victorian home he finds is a ruin. Locals tell him it was hit in a German bombing raid on September 3, 1943, and all were lost (that date was one of Abe's last whispers). Then he's called by a pretty young girl but her companions are odd so he ducks through a cave, taking off back to the town. But the town he arrives back at isn't the one he left. It's 1943, the old empty pub he left full. Before he's realized what's happening, beer glasses begin flying all about the room, allowing his escape and audience exposition. That young girl, Emma (Ella Purnell, "Kick-Ass 2"), recognized him by his resemblance to his grandfather. She and the other peculiars are stuck in the same day in a 'loop' devised by Miss Peregrine (Eva Green), a rare female form of peculiar called an ymbrine who can manipulate time and take the form of a bird. Her and other ymbrines' loops have been created to protect peculiar children from Hollows, former peculiars whose quest for immortality turned them into monsters. Their leader, Barron (Samuel L. Jackson), whom Jake glimpsed outside Abe's house, discovered that eating the eyes of peculiars, particularly children, began returning him to humanity from the monstrous, long-limbed faceless form known as a Hollowgast, the thing haunting Jake's dreams. All this tortured lore is just the raison d'être for the peculiars. Emma can control air and would float away if not for her lead shoes. Enoch (Finlay MacMillan) brings inanimate objects to life with the hearts of tiny animals (Burton stages a stop motion fight with dolls escaped from Sid of "Toy Story's" toy chest). Olive's (Lauren McCrostie) touch lights fire, Horace (Hayden Keeler-Stone) can project his prophetic dreams, Fiona (Georgia Pemberton) makes plants grow, Hugh (Milo Parker, "Mr. Holmes") is a human beehive, Millard (voice of Cameron King) is invisible, Claire (Raffiella Chapman) has a mouth on the back of her head and little Bronwyn (Pixie Davies) has the strength of ten men. The Twins (Joseph and Thomas Odwell) are creepily masked in burlap, their talent not revealed until it's needed. Jake insists there is nothing peculiar about him, but he has Abe's ability to see the otherwise invisible Jack Skellington-esque hollowgasts, the reason Abe left the home in the first place, the better to fight their enemy. Neither Burton nor Goldman stop long enough to let any of their characters develop and Butterfield isn't expressive enough here for an sympathetic hero. Only the great Terence Stamp creates any kind of emotional pull. Green is tasked with portraying a not particularly warm character, so there is little to draw us to her other than the obvious, her spectacular look, makeup, hair and dress all designed to suggest avian features. The peculiarities of the peculiars are just too odd, reverse engineered to match freakish photos, and none of them make much of an impression, young Keeler-Stone an exception. O'Dowd is simply dropped from the story altogether, abandoned on a Welsh island. Jackson hams it up and one wonders just what drew Judi Dench to the role of Miss Avocet, a defeated ymbrine who shows up at Miss Peregrine's only to be thrown through a wall. An unrecognizable Rupert Everett (""My Best Friend's Wedding") plays a suspicious ornithologist. Burton only excels here at what he's always done best, making the weird cool looking. Torenhof, a castle located near Antwerp, stands in for Miss Peregrine's home and the place is perfectly cast. A sunken luxury liner is eerie and the slapstick climax uses its former passengers in a fight against Hollowgasts made visible via snowball and cotton candy on a Blackpool pier. That bit's fun, but "Miss Peregrine's Home for Peculiar Children" is a drag. Grade: