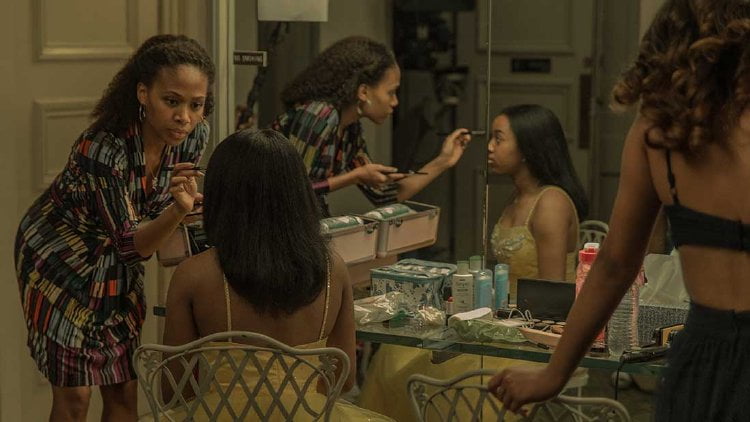 Turquoise Jones (Nicole Beharie, "42," "Monsters and Men") is still known around Fort Worth, Texas, for having won its prestigious black beauty pageant, even though she never was able to capitalize on its scholarship as others had.  The single mother holds two jobs, one at the run down Wayman’s BBQ and Lounge, the other a part time gig as a makeup artist at a funeral parlor whose owner, Bacon (Akron Watson), has eyes for her.  While she weighs taking her estranged husband Ronnie (Kendrick Sampson, HBO’s ‘Insecure’) back into her life, she pins all her hopes and dreams on her fourteen year-old daughter Kai (Alexis Chikaeze) winning her former title of “Miss Juneteenth.”

Writer/director Channing Godfrey Peoples (TV's 'Queen Sugar') makes her feature debut with a beautiful character study of perseverance and generational change in what it means to be a Black woman in the American South.  Juneteenth commemorates June 19, 1865, the day slavery ended in Texas (two years (!) after the Emancipation Proclamation), a historical event celebrated by the community and by this film’s titular pageant.  And yet while history, both national and personal, is a constant here, the movie is about Turquoise learning to overcome the obstacles hamstringing her own future.

We meet Turquoise achieving a goal, having finally saved $800 in tips at Wayman’s.  What is the money for in a household struggling to pay its ‘power’ bill?  Kai’s dress for the Juneteenth pageant.  There’s a problem, though.  Kai isn’t very enthusiastic about the pageant and everything the young girl witnesses – the judgmental remarks of pageant runner Mrs. Washington (Phyllis Cicero) as her mom signs her up, the digs directed at Turquoise by her former fellow contestant Clarissa (Lisha Hackney) and her mom’s disregard for her chosen talent piece – backs up her stance.  Still, there’s that scholarship to any historically black school of her choice to consider and as Turquoise tells Betty Ray (Liz Mikel), who still marvels at the sight of the former Miss Juneteenth scrubbing Wayman’s toilets, ‘I want her to be something we ain’t.’

The momma hen’s anger on spying her daughter kissing a boy outside her high school hints at her own choices even as she welcomes car mechanic Ronnie, always promising but rarely delivering financial support, back into her bed.  And no sooner has she done so when he’s arrested, needing bail money around the same amount left to secure Kai’s dress.  Turquoise also has to deal with a mother (Lori Hayes) who criticizes her interruption of ‘her worshipping time’ at Church, but whose alcoholism requires emergency assistance.  Then Wayman (Marcus M. Mauldin) has a heart attack and Kai’s rehearsal is upon them...

Not only has Peoples conjured an entire community, she’s made a multi-faceted one both informed and hindered by its past.  It’s fascinating to observe the inner workings of the pageant, stressing, as it does, the etiquette skills of a bygone era, its ranks welcoming back one of their own with false smiles.  Wayman’s is the type of place that’s seen better days and yet can maintain clientele with familiar nostalgia (a sandwich board advertises ‘chopped beef $4, brisket $5’).

But it is her heroine who sings here, Peoples and her luminous star Beharie creating a strong woman who has to let the scales drop from her eyes to realize her own self worth.  That her daughter’s surprising third act rebellion plays so beautifully into this is a plus which also enhances the unfurling of the film’s historic tapestry.   The way Turquoise deals with the two very different men in her life exemplifies the synergy of writing, directing and acting on display here.

“Miss Juneteenth” is a gem that thrusts Beharie into a well deserved spotlight and announces Peoples as a filmmaker able to project the way circumstance and community have shaped her protagonist onto the screen and make us invested in her welfare.

Turquoise Jones (Nicole Beharie) was once destined for a promising future when she won the prestigious Fort Worth beauty pageant. But, life passed her by and, now, she pushes her daughter, Kai (Alexis Chikaeze), to take her shot at the coveted tiara and become “Miss Juneteenth.”

If the American public was not aware of the importance of June 19, 1865 in our history, at least for our Black citizens, our president, in yet another inept gaff, has made it prominent in all our minds. Writer-director Channing Godfrey Peoples, uses this special day for African-Americans to tell Turquoise’s story about not letting go of her past glory and missed opportunity for the future.

Years ago, Turquoise had it all at her fingertips. She received the tiara as Miss Juneteenth winner and a full scholarship at an HBCU. Then, life fell on her and her youthful dreams disappeared. Now, she works at Wayan’s BBQ shack and part time as a makeup technician for a local funeral home. Now her dreams revolve around Kai.

Her primary goal for Kai is she follows in her footsteps and enter the Miss Juneteenth contest, win and not make the same mistakes Turquoise made. Kai, though has her own dreams – to be a dancer. This becomes a battle of wills as Turquoise maps out her plans for Kai’s future, whether the teen likes it or not.

Nicole Beharie stands out in her performance of a single mom who has had to struggle her whole adult life and wants something more and better for Kai. It is a powerful character study and the actress gives a vibrant, believable performance. Newcomer Alexis Chikaeze makes quite a splash in a role that she earned from her very fist audition as an aspiring actor. Kendrick Sampson, as Turquoise’s ex and current lover Ronnie, represents the male role in this matriarchal world where women have to fight, far too often, to get ahead.

This is Channing Godfrey Peoples’s first feature work and if I did not know that, I would never have thought that this is her big screen (in the era of covid-19) debut. There is maturity to Miss Juneteenth that, as I watched, made me think I just saw a fully formed filmmaking talent arrive on the scene. Let us make that two and include Nicole Beharie with that same praise – even though this is not the actor’s first time on screen.