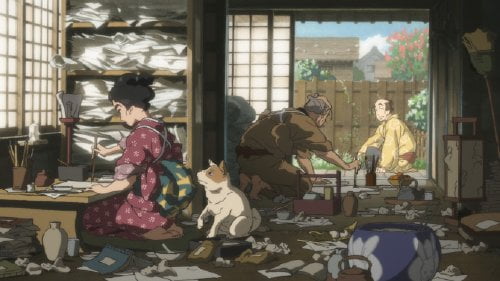 There’s this nutty old man. He painted a huge Dharma on a huge sheet of paper. And on the other hand, he drew a pair of sparrows on a tiny rice grain. His name is Tetsuzo. But maybe you know him as Hokusai the painter?' These are the introductory words of O-Ei (voice of Anne Watanabe), the daughter of the man most well known for 'The Great Wave off Kanagawa,' but also a painter in her own right, a woman who lived an unusual life cloaked in mystery in early 19th century Tokyo, "Miss Hokusai."

Adapting Hinako Sugiura's manga series, director Keiichi Hara and his screenwriter have filled in some of the many blanks in O-Ei's life with their own imaginations. The resulting anime is a sometimes bawdy look at a strong woman who was criticized by her father for painting erotica without experience. We find the two living a slovenly lifestyle along with Zenjirô (voice of Gaku Hamada), an often drunk artist, and an adorable little pug, the film's comic relief. 'We don't cook. We don't clean. When it gets too dirty, we move,' O-Ei tells us. As we watch the large, lumbering (and hirsute!) Tetsuzo completing a commissioned dragon, an ash falls from O-Ei's pipe, ruining the work. He refuses to redo it and his client is in a tizzy. We watch O-Ei sit up all night, creating her own dragon (one of the few works of O-Ei's which still exist) which will be sold as her father's. The trio of roommates will travel to one of Edo's brothels, O-Ei's paintings of women much admired by dad. 'If a bell rings, come to my room,' its madam says. 'If not, please take your leave in the morning.' A supernatural element which ties her to Tetsuzo is revealed. Artistic creation is, of course, a major element of "Miss Hokusai," the works coming alive with equally creative animation (Hokusai's wave makes a 'real life' appearance), but Hokusai's relationship with his family is the other major throughline here. O-Ei visits her mother, Hokusai's second wife, who lives apart from them. She spends a lot of time with O-Nao (voice of Shion Shimizu), the blind little sister afraid of asking anything of her distant father. These sequences are the most magical, Hara's use of exaggerated sound compensating for O'Nao's lack of sight even more compelling than his visuals. O-Nao asks to be taken to the bridge where she and O-Ei stand taking in commerce, transport and the bustling sounds of the city. In another scene, O-Nao is befriended by a little boy, who, realizing she is blind, shakes the snow from the trees to entertain her. Hara creates a vacuum, snow absorbing ambient noise, the sound which does come through possessing the metallic tang of cold. There are two young men in O-Ei's life, one whom actively tries to court her, another who flusters her. But the independent young woman places family and work first. She eventually succeeds in uniting her father and sister, but O-Nao's tragic illness makes him retreat. The film's final image, her depiction of O-Nao with red camellias, looks lit from within. "Miss Hokusai" is easily one of the best animations of the year, an unusual life expressed with unusual artistry and deftly shifting tones. Grade:

Edo, Japan 1814. O-Ei (Anne Watanabe) lives in the shadows of her legendary artist father, Tetsuzo (Yutaka Matsushige), who is a hard taskmaster for his daughter. But, she perseveres and becomes a talented painter unto herself. She struggles to keep her fragmented family together and remain loyal to her temperamental father in “Miss Hokusai.” Keiichi Hara, with a screenplay by Miho Maruo adapted from the manga, “Sarusuberi,” by Hinako Sugiura, tells Tetsuzo’s (AKA Hokusai) story through the eyes of O-Ei. She is his apprentice and caretaker and, frequently, called upon to fulfill Tetsuzo’s commissions when the moody master artist decides not to. This historical biography is a quiet examination of a father and daughter/master and apprentice as they ply their copious talents to create works of art for their patrons. It is also a display of the artistic style of that period in Japan as developed by old master Tetsuzo. (I did some research on the artist and the filmmakers capture well his works at that time in his life.) “Miss Hokusai” is a straightforward Japanese anime with the concentration on the characters. The warm color palate lends to the animation’s subtlety beautiful look as time passes. Marking time, by the way, is shown with the adoption of a small puppy who we watch grow into a dog. The dialog is often witty and sometimes quite serious as we get to know the extended family of artists and students who come to Tetsuzo to learn. The relationships between the characters rings true, especially O-Ei’s with her father. The filmmakers took some literary license with the artist’s life but that is a minor nitpick.