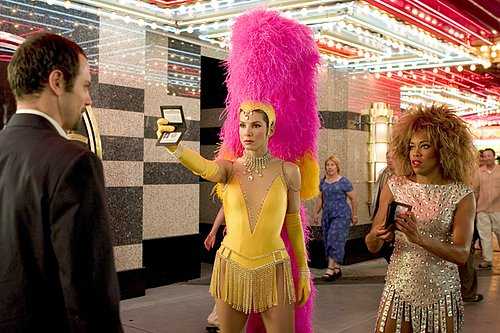 Just a few short weeks before FBI Agent Gracie Hart (Sandra Bullock) went undercover in the Miss United States beauty pageant, stopped the mad serial killer bomber and became a national sensation. Her now-famous face has put her partner’s life in jeopardy during an almost disastrous bank heist stakeout and she is pulled from active duty. But, when the “new face of the FBI” learns that her best friend, pageant queen Cheryl Frazier (Heather Burns), has been kidnapped Gracie can’t help but spring into action in “Miss Congeniality 2: Armed and Fabulous.”

When FBI Agent Gracie Hart (Sandra Bullock) returns to the field, her fame blows the team's cover during a bank heist. Gracie saves the day and a bulletproof vest saves her colleague, but she sadly realizes her favorite job in the world is about to come to an end. When her boss, Agent McDonald (Ernie Hudson), suggests that she trade in on her celebrity, becoming the 'face of the FBI' doing talk shows and the like, Gracie reluctantly agrees, then falls into the glam role all too easily. That is, until her old buddies, Cheryl Frazier (Heather Burns), the reigning Miss America, and pageant emcee Stan Fields (William Shatner) are kidnapped in Las Vegas. Gracie comes roaring back as "Miss Congeniality 2: Armed and Fabulous." Producer Bullock has assembled much of her old team, and yet this is the rare sequel that surpasses the original. While the original relied on too many pratfalls and a charmless romance with Benjamin Bratt (in his worst performance), the sequel utilizes snappy dialogue and a female buddy pairing with the terrific Regina King ("Ray"). Producer/screenwriter Marc Lawrence, in his fourth collaboration with Bullock, is guilty of overstuffing this one with too many plot strands, but the focal conflict between Agent Hart and the FBI Barbie she swore she'd never be works well, each alter ego paired with a dynamic supporting character. Not only is Hart facing career issues, but she's thrown into a personal tailspin when Eric Matthews (Bratt, not seen or heard in the sequel) ends their relationship over the phone. Going the glam route for the FBI is going to be a confidence builder for the lovelorn agent. McDonald solves a problem of his own, though, by saddling Hart with Sam Fuller (King), a Chicago transfer with anger management issues as her bodyguard. Sam loathes the entire concept of Hart's image, but her success on this job is her last chance to remain in the FBI. Sam's counterpart is Gracie's new personal stylist Joel (Diedrich Bader, "Napoleon Dynamite"), a gay man given to double entendres ('It's been months since I had a good debriefing') and face misters. The film echoes such genre outings as "Beverly Hills Cop" and "Rush Hour" by dumping Gracie into the hostile jurisdiction of Las Vegas FBI supervisor Collins (Treat Williams, "Hollywood Ending," walking through the film) just as her friends are being ransomed. Gracie's efforts to help are perceived by Collins as obstructing justice, but she and Sam persist, aided by clueless local junior agent Foreman (Enrique Murciano, "Black Hawk Down"), their reluctant insider. Of course, Gracie's eventual rescue, being in Las Vegas and all, will involve tackling a celebrity (good sport Dolly Parton), impersonating one (Sam as Tina Turner in a drag show), and becoming inadvertent extras in Treasure Island's pirate boat extravaganza. "Miss Congeniality 2" allows its heroine to go over to 'the dark side,' revelling in heels, couture, manicures and hair styles, until she's yanked by opposite extreme Sam, whose anger and isolation are softened by Gracie (they bond over a hypo allergenic pillow, of all things). Lawrence, not leaving well enough alone, mirrors the character arc with Gracie's shallow advice to a little girl (Molly Gottlieb) at a book signing which she is compelled to correct in an overlong epilogue. Lawrence also adds unnecessary subplots, such as Foreman's cheating girlfriend Janet (Elisabeth Röhm, TV's "Law & Order"), and the kidnappers' (Karl and Lou Steele, Nick Offerman of "Cursed" and Abraham Benrubi of "Open Range") falling out with mobster Mr. Grant, that peter out into the ozone. Still, most of the cast put the material over with panache. Once again Bullock demonstrates her comic chops with great timing. She's so appealing that her character's Barbie transformation is a bit confusing, if, thankfully, short-lived. Physically, Bullock's past falling off her heels and into more action, but she also enjoys a couple of comedic bits, such as juggling the sagging breasts of a disguise she's no longer in character for. Regina King is all fierce glower and intimidation. King plays Fuller like a straight man and it works, making the friendship that eventually grows between the two agents feel real (unlike Bullock's girlish pogoing with Burns, which, while cute, is cartoonish). King's transformation into Tina Turner is even believable because it's done with conviction, Bullock providing the laughs in a showgirl getup that makes her look like Big Bird (great costuming by "Stuck on You's" Deena Appel). Diedrich Bader's contributions are plentiful as well, a great comic side kick as equally out of place in FBI offices as Hart at her glam girl peak. "Miss Congeniality 2: Armed and Fabulous" (what's with these pointless subtitles lately?) comes with little originality or heavy message, but it is not a retread of the original and it comes with plenty of laughs. Its main fault is overscripting, just like its name's pointless, colon separated subtitle.

I didn’t have high expectations for the sequel to the less than fabulous “Miss Congeniality” so maybe that’s why I kind of took a liking to this follow up venture. This time, Gracie is no longer the klutz in high heals taking pratfalls left and right. This time around, she is elegantly poised and graceful on the outside but still the firecracker FBI agent on the inside and I think that this is one of the reasons that the sequel proved, to me, to be better than the original. When Gracie is recognized during a bank stakeout her and her partner is shot because of it her boss, Agent McDonald (Ernie Hudson), pulls her from active and convinces her to hit the PR circuit to capitalize on her fame and give the agency a needed publicity boost. Joining her on the whirlwind tour is uber-stylist Joel Myers (Diedrich Bader) and his entourage, just in case any rough edges need smoothing. McDonald also assigns Agent Sam Fuller (Regina King), a tough, ambitious but truculent woman who is less than thrilled with the “mission.” Sam has a long history of not getting along with her partners, or anyone else for that matter, and this may be her last chance to keep her job. When Miss United States is kidnapped, along with pageant emcee Stan Fields (William Shatner), Gracie is assigned as the FBI spokesperson and is trundled off to Las Vegas where the investigation is centered. Once in Vegas, Gracie and her gang come under the command of the local agent-in-charge, Walter Collins (Treat Williams in a what-the-heck-is-he-doing-this-for?” role), who seems to be here just to get in Gracie’s way before she can, finally, bust the bad guys. Junior agent Jeff Foreman (Enrique Murciano) joins Gracie’s posse, assigned by Collins to keep an eye on Gracie and make sure she gets on the next plane heading back east. Of course, Agent Hart and company never make the plane. Miss Congeniality 2” benefits from the comic timing and ability of its star, Bullock. Delivered from the tiresome pratfalls of the first film, Gracie has come to like the celebrity life and all its perks, even if she can’t do the undercover work she loves. The feisty former Grace is still there and she is given a good foil by way of Sam. All Agent Fuller can see is Gracie as FBI Barbie and hates the assignment but has no choice but to take it. Regina King gives a performance full of physicality and attitude and you know that Sam and Gracie will be, eventually, best buds. No surprise there but a solid performance by King, nonetheless. Bullock does a good job reprising her Gracie Hart character and gives her more complexity this time around. It’s the supporting cast, though, that help to make the sequel better than the original. Besides King, Diedrich Bader is amusing as Joel. He doesn’t try to outdo Michael Caine in the original and comes across naturally funny as the flamboyant stylist. William Shatner hams it up as expected in his extended cameo as Stan Fields. Ernie Hudson gets the thankless role as The Boss. Underutilized but notable are Nick Offerman and Abraham Benrubi as the kidnappers Karl and Lou Steele. Thankfully, the filmmakers chose not to bring back Candice Bergman’s horrible bad guy character, Kathy Morningside, from the original. This alone raises “Miss Congeniality 2” up a notch in my eye. But, things aren’t perfect in this sequel paradise. While the main story runs at a compact 90 or so minutes, the add-ons at the end of the film are a killer. There are no fewer than three, count ‘em three, finishes for ”MC2.” The wrapping up with Gracie, Cheryl and Stan takes a few minutes to get through. Then, there is the girl bonding between Agents Hart and Fuller that is a hug fest of strong femininity. Finally, there is the final, final wrap that has Gracie showing what a good role model she is to a wide-eyed schoolgirl who idolizes the FBI agent. I could have been home in my jammies in the time it took helmer John Pasquin and company to tie up all the ends. This self-indulgence to tie up all the loose ends dropped my esteem a bit and