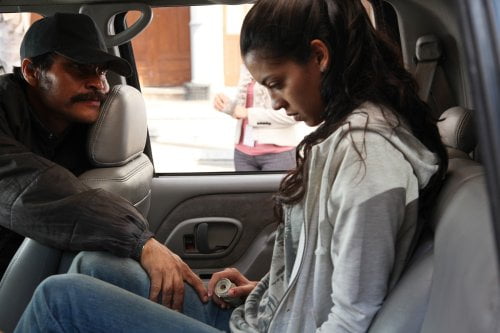 Laura Guerrero (Stephanie Sigman) is an aspiring beauty pageant contestant who dreams of being crowned Miss Baja. The road to that crown will turn rocky, though, when she finds herself in the middle of a drug war as “Miss Bala.”

In the Mexican border city of Baja, Laura Guerrero (Stephanie Sigman) is a poor young woman taking care of her father and little brother with dreams of a glossier life. She ignores her father's warnings to head into the city with her best friend Suzu to enter the Miss Baja California contest. Both get a slot, but when Suzu leads Laura into a questionable nightclub to celebrate, a drug cartel run by the notorious criminal Lino (Noe Hernandez, "Sin Nombre") hits the club with guns blazing and as the only witness, Laura will find that she's become a trading commodity as "Miss Bala." Mexico's entry for the Foreign Language Oscar is a gritty piece of filmmaking from cowriter (with Mauricio Katz)/director Gerardo Naranjo which uses the experience of one innocent girl as a metaphor for the crime and corruption which has overtaken his country in the past decade. It's an odd film, part crime thriller, part social commentary, with a weird Stockholm Syndrome psychology between its two leads which is difficult to parse given the ofttimes confusing action which tells us one thing yet does another. Still, Sigman, a natural beauty in her feature debut, evokes sympathy if not always understanding and the dynamic cinematography of Mátyás Erdély plunks us right into some hair raising scenarios. Laura witnesses Lino's gang entering the club and cowers in the bathroom. She used as an entry shield and manages to escape the club and also see the gang taking three wrapped corpses out before they flee. She cannot find Suzu and when she returns to the Miss Baja offices the next day she's dressed down for showing up late and told she and her friend have been scratched. Seeking help from a traffic cop to find Suzu, Laura finds herself promptly delivered right back into the thick of things and Lino takes a shine to her. She becomes a terrified pawn among the drug gang, American DEA agents and the Mexican cops, her home and family yanked away as a means of escape. This is thrilling stuff and it's clear Naranjo has a lot on his mind about the state his country has fallen into. If only he had a clearer narrative. We see Lino instructing Laura that one of his guys will drive her to buy a dress for the pageant, but she leaves his car to walk back into the pageant offices and escape - to go to a dress shop! Where she tries on many yet does not buy. This type of inconsistency continues to crop up. Lino seems content to let Laura go, but then always has another plan for her when she fails to do so. Maybe Naranjo is trying to convey a confused state of mind, but it doesn't come across that way. The film sets us up for a zig and then zags but rather than any 'aha!' effect it left me wondering 'huh?' On the flip side, Laura's biggest surprise - the identify of those three corpse parcels (which she inadvertently helped deliver to the U.S. Embassy door) - will be no surprise to anyone else. Still, there is talent here and some strong moments. Laura's audition reveals a hopeful girl with a cheap dress, scuffed shoes and chipped fingernails, the portrait of poor yet hopeful innocence. Her friend Suzu's tackier, more grasping approach leads straight into the mess they get into, a comment on Mexico's descent into corruption. Lino keeps Laura's hand in the competition and it's both sad and funny - Irene Azuela has a priceless moment as the surefire winner who finds out otherwise. But the film's late going piles on more conflicting logic, like why Laura would endanger herself to save the hide of the loathsome General Salomón Duarte (Miguel Couturier, "Once Upon a Time in Mexico"). Yet even here, Naranjo makes statements on the treatment of women which cannot help but recall the notorious torture killings of hundreds of women in Ciudad Juarez.

Marrying a beauty pageant story with one about drug cartels taking over Mexico sounds like it has potential. However, director/co-scribe Gerardo Naranjo does not weave these two very different storylines. Instead, he mashes them together into a head-scratch inducing jumble that never defines itself. This confused screenplay is also hindered by the film’s attractive but wooden star. Sigman has one expression that she uses for the entire film – the look of a deer trapped in the headlights. It may have helped if the filmmakers set the stage by explaining the turmoil going on in Mexico where drug lords rule large sections of the country and guns and bullets have become a normal way of life. But, this does not happen and I spent most of my time watching the film trying to figure of who is shooting at whom and why? Also, why does Laura keep getting kidnapped by drug lord Lino (Noe Hernandez) only to be let go time after time? Sloppy writing and storytelling make the near two hour film seem far longer.