Miss and the Doctors 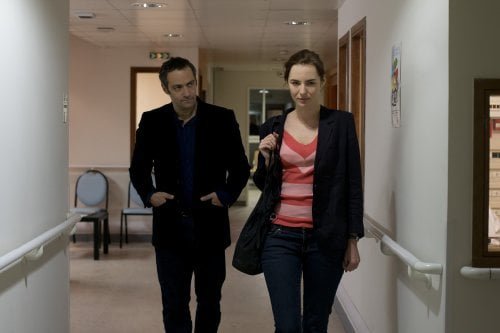 In the 13th arrondissement, Paris's Chinatown, Boris (Cédric Kahn) and Dimitri Pizarnik (Laurent Stocker de la Comédie Française) are bachelor brothers whose medical practice gives each distinct ties to their neighborhood. When a call from a diabetic little girl, Alice (Paula Denis), is routed their way, the two arrive with their dog Aspro and find her alone. Boris follows up the next day with her mother, the strikingly sexy Judith Durance (Louise Bourgoin, "Black Heaven") who inquires whether he's the 'grumpy' or the 'shy' one (he's the former). When Dimitri later tells Boris that he loves her, Boris will keep his own infatuation secret for a time in "Miss and the Doctors."

Writer/director (and former film critic) Axelle Ropert ("La France" writer) has created a true original, an enchanting yet melancholy look at one of Paris's least cinematically represented neighborhoods where one single mother shakes two brothers out of their routine. Kahn and Stocker couldn't be more different in demeanor and appearance, but theirs is a dual act, a happy contentment masking twofold loneliness despite their every day engagement with shop keepers and patients met around the streets (or, in one embarrassing moment, at Dimitri's AA meeting). Pizarnik 1 represents the physical, 2 the more cerebral. Bourgoin, a more down-to-earth Adjani in appearance, is a glamorous night creature, a self-described Queen of Cocktails at a chic watering hole whose bright red coat aligns her with the Chinese noodle shop where Bruno pitches oddly houred woo. Bruno's amusement at Judith's interest in the rare occurrence of 'penis captivus' should have been his red flag, her self awareness of her own powers of seduction. While Bruno (who's also drawn the unreturned attentions of their administrator Annabelle (Camille Cayol)) is clearly Judith's preference, both men are thrown for a loop when a hotel house call patient turns out to be none other than Alice's father, Max Fusetti (Jean-Pierre Petit), who all too easily slips back into old family habits. Alone again, the brothers are much changed, Dimitri moving to a place of new vistas, sending a regretful postcard to Boris, who carries on with renewed commitment, the same but different. Ropert adorns her neighborhood with actors in small supporting roles who make big impressions. Denis is Preternaturally mature and composed as Alice. Ropert's filmmaker collaborator Serge Bozon is Charles, a patient turned go-between; Alexandre Wu the witty epileptic Kay and Gilles Gaston-Dreyfus ("Mr. Bean's Holiday") M. Perez, a patient whose chance meeting with Annabelle, now employed elsewhere, provides a gossipy coda. "Miss and the Doctors" heralds a new filmmaking voice, one who makes the familiar glow anew.