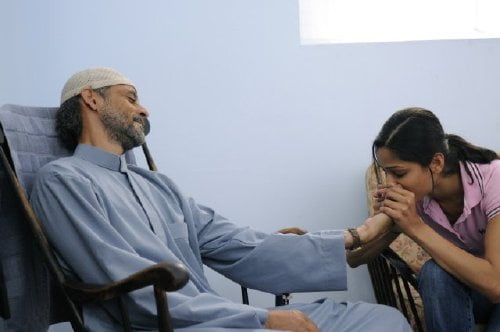 17-year old Miral (Frieda Pinto) grew up under the tutelage of Hind Husseini (Hiam Abbass), founder of the Dar Al-Tifel Institute, a progressive orphanage for Palestinian children left without family. Husseini teaches peace through education and strongly influences Miral. It is the 1980s, though, and, just beyond the walls of the institute, there is political violence between the Israelis and the Palestinians wanting their own homeland. When Miral takes a teaching assignment at a refugee camp, where she sees, first hand, the oppression of the Palestinians by their Israeli masters and she must strike a balance between her peace-intensive education and upbringing and pursuing freedom for her people in “Miral.”

A disjointed, fractured look at Israeli/Palestinian history through the eyes of the director's girlfriend, "Miral" is only worthwhile for the performances of Hiam Abbass, "Cairo Time's" Alexander Siddig (seen above) and "Caramel's" Yasmine Elmasri as Miral's mother Nadia. The events in the film are structured so choppily, one is often left wondering just what the heck is going on. A real disappoint from artist turned filmmaker Julian Schnabel.

Artist turned director Julian Schnabel blew away the film world with his 2007 “The Diving Bell and the Butterfly,” the true story of a French magazine publisher stricken by a stroke that paralyzes all except for left eye – which he used to dictate a book about his plight. Now, with “Miral,” Schnabel takes a step back, way back, with a script by girlfriend Rula Jebreal based on her novel. The result is a flatly told story that evokes little sympathy or empathy for the title character and few of the rest of the overly huge cast. The exceptions are Abbass, as Hind, and Alexander Siddig as Jamal, Miral’s father. The characters that these two veteran actors create are the only ones I ever cared about. There are so many characters in this wannabee epic that none are given any dimension, including Miral. The movie starts out with Miral’s voiceover saying that she was born in 1973 but story begins in 1947. Flash back to Christmas ’47 in Jerusalem and British matriarch Bertha Spafford (Vanessa Redgrave) is hosting a traditional celebration with her friends and family. She welcomes Jew, Gentile and Muslim into her home and toasts the future. 1948 rolls in and the UN votes to establish the state of Israel. Suddenly, friendship between Jew and Muslims disintegrates and the present day political strife in Israel is born. After this introduction, “Miral” is divided into chapters. First is “Hind,” telling the story of a woman, saving 55 abandoned children made homeless by fight between Jew and Muslim. She takes them all into her home and, with her own money, cares for them all. Her kindness becomes known and orphaned children flock to her in droves. Soon they are 200 in number and growing daily. While Hind’s story is only background for events to come, this first chapter is the best in the film. Subsequent chapters, “Nadia,” “Fatima” and, finally, “Miral,” briefly, too briefly, tell the stories of each young woman as their paths cross during decades. The problem with the two middle stories is that the characters are not fleshed out. Just as you start to get to know them, they go away. This is true of many of the (many) characters introduced with none given time or material to flesh them out. Techs are straightforward and without note. The film feels too much like an indulgence by Schnabel to his girlfriend, Jebreal.