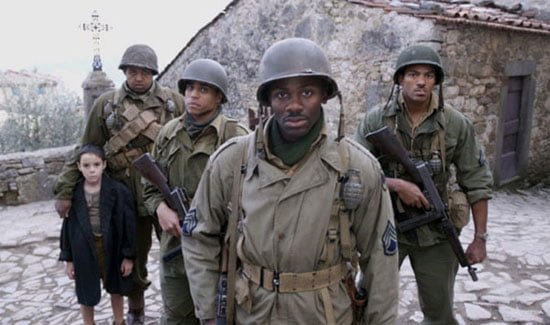 In 1944, the US Army created the 92nd Infantry Division, the first all-black combat unit in the army dubbed Buffalo Soldiers. Sent to Italy to fight the Germans, they set out to refute the myth that Negro soldiers would run from battle. Spike Lee tells the story of four of these brave men stranded behind enemy lines in "Miracle at St. Anna."

Director Lee does his own "Saving Private Ryan" with the little known World War Two story of the African-American 92nd. "Miracle at St. Anna" begins and ends in 1983 Harlem where an aging postal clerk, months away from retirement, pulls out a German Luger and shoots a customer, point blank, at his window. Cub reporter Tim Boyle (Joseph Gordon-Levitt) arrives too late at the crime scene to get a scoop but good hearted head cop Tony Ricci (John Turturro) cuts him a break and gives the young man a great lead for a newspaper story. Boyle gets the chance for an exclusive interview with the killer, Hector Negron (Lax Alonzo), who reluctantly tells the reporter his story. Flash back to 1944, we are in the midst of an attack by the Buffalo soldiers across a river on the Nazi Gustav line. The Germans send a hail of bullets and cannon fire into the advancing troops but a handful makes it to the other side. When they radio back that they made the crossing and request artillery support, their bigoted redneck commander, Captain Nokes (Walter Goggins), refuses to believe his men. Instead of bombarding the enemy, the American shells are erroneously directed right on top of their own troops. During the confusion and raining death, four of the soldiers ­ Stafff Sergeant Stamps (Derek Luke), Sergeant Cummings (Michael Ealy), Corporal Negron (Alonzo) and Private Train (Omar Benson Miller) ­ are strandded on the wrong side of the river. They are forced, until they can make their way back across the line, to take refuge in a small Italian village. There Train saves and befriends a nine-year old orphan, Angelo (Matteo Sciabordi), who the soldier thinks has special powers. Miracles and misery shroud the town, the site of a massacre of villagers by the Nazis for hiding partisans. Spike Lee, who can be an outstanding filmmaker, only does a fair job with his first (and likely last) war movie. Utilizing a script by James McBride (based on his novel), the helmer tries to do too much, even with 160 minutes to play with. The well-worn opening and closing plot device ­ a crrime, a reporter, a story ­ slides over to the meat of the tale, sett in the waning year of WWII. It is not just a story, though, it is also takes stabs at teaching history, denigrating prejudice, depicting bravery, fighting discrimination and showing the horrors of war. The director gave the writer too much leeway, resulting in a muddled, confused near mess that interests only in fits and starts. Surprisingly, for a film that focuses on the four leads and several important supporting members and nearing three hours long, little is done to give any depth to the characters. The actors all do a fine job but you never get to know them as people. Everybody is symbolic to one degree or another but not real. There is too much material ­ trying to cover all the basses in not enough time. It should be shorter, tighter and more focused. I didn't mind the long run time (now, there's a miracle) but there were too many down moments that could have been done without. I love a good war movie, mainly because of the battle action ("Pork Chop Hill" is a great example). "Miracle at St. Anna" only has spurts of war that are handled in only an okay manner. The ups and downs of the story caused lapses of attention that should not be. It is not a waste of time but I would rather have waited to see it in the comfort of home.