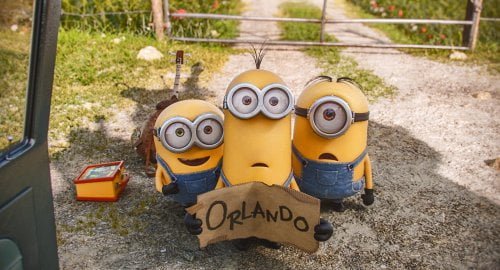 Before Gru what did the Minions do? As it turns out they've been around since life began on Earth, always looking for a villainous master to serve. But their rather haphazard ways doomed many bosses from the T-Rex to Napoleon. Having found refuge in Antarctica after their last failure, the little yellow dudes fall into a deep depression until Kevin decides to set off on an expedition accompanied by the rebellious Stuart and adorable Bob because somewhere out there is a master who needs "Minions."

It's not only villainous masters who needs Minions! While this third in the "Despicable Me" series doesn't live up to the first film, it's an improvement on the second, which itself was stolen by Gru's lovable assistants. This film's villain, actually the world's first female super villain Scarlett Overkill, isn't very interesting and Sandra Bullock has nothing on Steve Carrell in comic vocal performance, but directors Kyle Balda ("The Lorax") and Pierre Coffin ("Despicable Me") and their animation team keep things lively with non stop, character driven, often subversive visual gags like the best silent screen comedies ("Minions isn't silent, but neither is it subtitled). An added bonus is the film's amazing classic rock soundtrack with 60's hits from The Turtles, Donovan, The Rolling Stones, The Kinks, The Boxtops, The Doors, The Who, Jimi Hendrix and The Beatles. The movie's opener could stand as a short on its own right. With Geoffrey Rush narrating, we see how the Minions have gotten through the ages, inadvertently offing bosses like Dracula in the Dark Ages. When the gang ends up together but without a cause, Kevin sets off across an endless horizon, Stuart and his guitar, Bob and his teddy trudging behind. It's 1968 and the guys eventually make it to New York City only to learn of a Villain Convention being held in Orlando. Even though the art of hitchhiking eludes them, Walter Nelson (Michael Keaton) stops his family station wagon and Eureka!, the whole family down to their cat are a bunch of bank robbers heading to the same event. The con's main attraction is a contest held by Overkill to find a new henchman. Somehow Bob manages to overcome the odds and the yellow trio is off to Swinging London, where Scarlett tasks them with stealing the crown of Queen Elizabeth II (Jenifer Saunders) - or else. Writer Brian Lynch ("Hop") starts with a funny origin story, only to bog down in uninteresting plot which ironically turns Kevin and company into feted heroes rather than fulfilling their minionhood. It's the little riffs that keep the ball in the air, like the gang's stint in a medieval torture chamber with Scarlett's devoted inventor husband Herb (Jon Hamm), some hypnotized tower guards breaking into an impromptu 'Hair' performance, the dethroned queen belting some back with the boys in a pub or Kevin's segue into Alice in Wonderland territory. Oddly, Lynch doesn't leave a lot of room for a sequel, the young Gru (Steve Carrell) making a third act appearance. The lozenge-shaped Minions prove ideal for the 3D treatment, but for the full bore experience stick around through the closing credits to be treated to Kevin, Stuart, Bob and the entire cast of characters as they rock out to 'Revolution' to eye-popping effect. Grade: