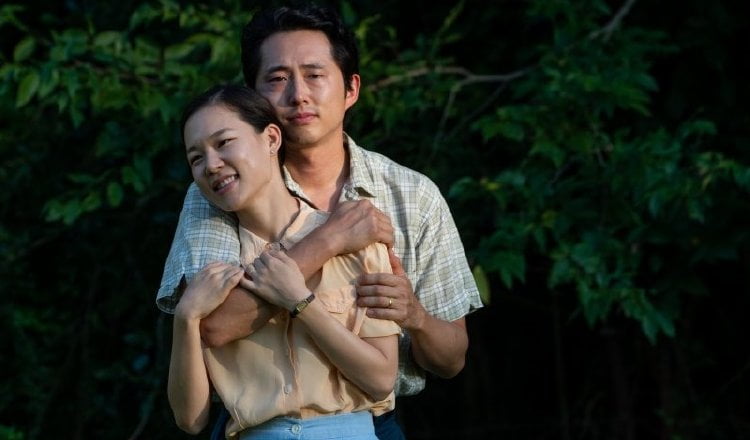 When Jacob (Steven Yeun) pulls into the Arkansas lot he’s just bought to give his family a new start, his wife, Monica (Yeri Han), is crestfallen.  ‘This isn’t what you promised,’ she says, even more disappointed when she views the interior of the trailer home parked on the remote plot.  As Jacob’s dreams of becoming an independent farmer continue to clash with Monica’s desire for community and security, they agree to compromise by bringing Monica’s mother (Youn Yuh-jung, 2010's "The Housemaid") from Korea to live with them in “Minari.”

Writer/director Lee Isaac Chung’s film is a moving story of immigration and the quest for the American dream complicated by the yin and yang of the marriage at its center.  Chung’s rich narrative encompasses so many aspects of the immigration experience - like children who are culturally different than their elders or how depending on one’s ‘own people’ amidst outsiders isn’t always the better bet – yet does so with a fresh approach that never feels clichéd.  Small details, like the fate of the male chicks Jacob and Monica sex for steady income at Wilkinson Hatcheries, reflect back upon cultural mores while the titular minari, a type of Asian water celery, connects old ways to new.

While one might think the extra attention given young son David (Alan Kim) over older daughter Anne (Noel Kate Cho) is Asian gender preference, we quickly learn Monica worries about his heart murmur, especially now that they are located an hour from a hospital.  Monica also constantly worries about money, watching as Jacob pays for a tractor delivery from Paul (Will Patton), the eccentric Korean War vet who becomes a fast friend.  The arrival of her mother, bearing bags of chili powder and dried anchovies, is emotional, but causes David, who has to share his room with her, to rebel against the woman who brews him nasty concoctions and ‘smells Korean.’  Theirs turns out to be one of the film’s most charming relationships, Grandma’s puckish approach to life (and far less cautious approach to his medical condition) turning him into an ally.

The family faces one obstacle after another – the terror of their first tornado watch, a well run dry and another medical emergency – and Jacob begins to give in to his wife, suggesting she, her mother and the kids return to California.  Then, just as everything seems to be going their way, Monica confronts Jacob about his commitment to land over family.  The film’s powerful climax, a devastating setback, brings clarity to everything.

Chung’s film, set during the Reagan administration, offers a very welcoming portrait of America.  Jacob and Monica are given ‘a big Arkansas welcome’ on their first day on the job.  The pastor at Church calls them a lovely family and later, at a pot luck gathering, two women welcome Monica, promising to help her learn English (the children have more racially insensitive interactions, but all in well meaning innocence).   Cinematographer Lachlan Milne (“Hunt for the Wilderpeople”) creates an overall aura of sunshine and nature, even giving the dark trailer interior a breath of fresh air.  Emile Mosseri’s score keeps evolving, subtle Asian notes giving way to a fairy tale feel, then becoming more urgent.  The ensemble is pitch perfect, every actor bringing their A game, young Cho evoking her mother’s character while little Kim’s more rascally side plays into Yeun’s faith in big dreams.

“Minari” may have started life as a small independent, but it paints a big picture of an America to believe in.