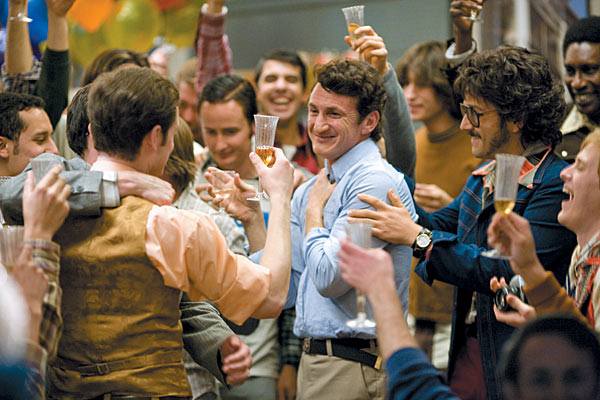 In 1977, Harvey Milk (Sean Penn) was the first openly gay man elected to a significant public office. After years of campaigning for gay and lesbian rights, his election to the San Francisco Board of Supervisors represented the liberalization of local politics and the passing of the country’s first gay rights initiative. Tragically, this thoughtful, forward-thinking and honest man would be deprived of achieving his full potential when former city supervisor Dan White (Josh Brolin), gunned him down in cold blood. Director Gus Van Sant tells Harvey’s story in "Milk.”

This is a boffo bio that, for one thing, begs for an Oscar nomination for Best Actor for Sean Penn. The versatile actor gives a subtle, nuanced performance as a man who, earlier in his life, became comfortable with his homosexuality. His emigration from NYC to San Francisco in 1972 was a transitional period for both Harvey Milk and his new hometown. He opened the Castro Camera store in the fast-becoming-gay Castro district of the city. The conservative city government and police force reaction to this influx of gays and lesbians leads to confrontations, often violent, between gay rights activists and the police. Penn captures Harvey Milk, the man, to perfection. Harvey, dedicated to the equal treatment for all in spite of sexual preference, soon becomes a leader in the movement and runs for the board of supervisors. He loses his first bid but it sparks increasing political awareness in the gay community. In 1977, after a citywide redistricting ordinance allowed neighborhood districts to elect their own candidates, Harvey won a seat on the city manager board of supervisors. After his election, Milk worked tirelessly for the rights of all, homosexual or heterosexual, making significant inroads into the conservative city and state politics. Van Sant, working a script by Dustin Lance Black, does a solid job in telling the story of the hopeful rise and tragic fall of a good, honest man who just wanted what is right for all of his constituents. Sean Penn brings nobility to the role of Harvey Milk but the supporting cast works equally hard in giving character to the real people they depict. James Franco, as Harvey’s once lover, muse and best friend Scott Smith, is an anchor as the ever-available ear to his friend. Josh Brolin gives a performance of escalating tensions as Dan White, a troubled man who will be the catalyst to Milk’s unfortunate martyrdom. Emile Hirsch (unrecognized by me, even after I knew who the actor was) is solid as Cleve Jones, a young man who supported and aided Milk in his exhausting campaigns. Alison Pill gives the right note to her perf as Anne Kronenberg, the self-professed tough dyke who takes over as Harvey’s campaign manager. The only weak note is Diego Luna’s Jack Lira, the young man who became Milk’s high maintenance and tragic lover. Lira’s neediness and Harvey’s acceptance of it did not ring true for me. The production is opulent and convincing with the many crowd and protest scenes giving believable scope to the civil rights movement that gripped and changed San Francisco in the 1970s. Longtime GVS collaborator, cinematographer Harris Savides, uses soft lighting and shadow but gets a crisp period feel, too. Danny Elfman’s music fits the bill, as does editing by Elliot Graham and production design by Bill Groom. Van Sant and his cast and crew capture the excitement and change gripping the country after the turbulent ‘60s and the calamity of the Vietnam War. “Milk” will get due attention come year’s end with Penn leading what could be an oft nominated awards choice. It is going to be a shoot out for the male lead but Sean Penn could be the quick draw winner.