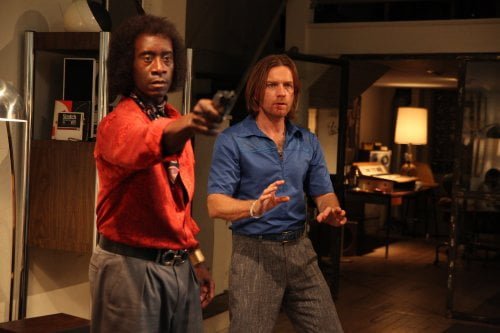 Cowriter (with Steven Baigelman, "Get On Up")/director/star Don Cheadle makes his directorial debut with a musicality befitting his subject while also delivering a career best performance. Flipping back and forth between a fictional account of the end of Davis's virtual 70's reclusion and his 1960's peak years, Cheadle presents a 'before and after' Davis on many levels. The film opens in 1979 from the point of view of interviewer Braden as a prickly Miles objects to his music being classified as 'jazz,' a word he deems made up to box artists into. The self-proclaimed Gemini (the twins) makes 'social music.' Cheadle then backs up several days, showing us the Miles who lived holed up in a NYC brownstone with copious amounts of booze and drugs. When a DJ notes that 'Kind of Blue' is a masterpiece that should be put into a time capsule, Miles calls in to set him straight before requesting 'Solea' from his own 'Sketches of Spain.' As the music fills his space, so do memories of his ex-wife, Frances. But his reverie is interrupted by pounding on his front door. Braden's barely introduced himself when he gets sucker punched. Returning the jab, the journalist gets inside, locking Davis out to cool down while he investigates the jazz great's environs. A truce of sorts is made with Dave agreeing to drive Miles to his record label to retrieve the session tape he claims they stole from him. Cheadle uses inventive transitions as he bounces back and forth between two decades, an elevator 'opening' into a nightclub, a literal punch in the face cutting to a punch in the gut of a phone call, a spread of racy threesome Polaroids giving way to wedding pictures. He's cast "Short Term 12's" Lakeith Lee Stanfield as 'Junior,' a budding trumpet player looking for a mentor (but not above betrayal) who acts as a ghost of Davis's own youth. There are many pairings, from the trumpet and piano, the two instruments favored by Davis's parents, to jazz and classical, the music Frances, a dancer, preferred (Davis calls Chopin and Ravel the improvisational innovators of their day). The largely fictional fast-paced 70's story with its coke scoring, car chases and gun battles gets at the essence of a master musician who's lost his way while the adagio flashbacks deal more factually with a legend-in-the-making, racism and the inspirational romance destroyed by infidelity, abuse and possessiveness. Cheadle slips right into Davis's skin, the smooth cool of the earlier Miles giving way to the raspy voice caused by stressed vocal cords and the more aggressive demeanor he became known for. McGregor does a shifty soft shoe shuffle as the fictional journalist, conning his way towards his goal. He's the comic relief of the odd couple buddy half of the film. Corinealdi is a stunning symbol of everything good that Miles has lost, becoming more of a real woman the more she drifts away. Michael Stuhlbarg ("A Serious Man") gives a punchy performance as Junior's determined agent. "Miles Ahead" isn't a typical biopic, more of a riff on a crucial moment in the musician's life that reflects on where he came from and where he might be headed. Cheadle wraps beautifully with a staged concert where he performs as Miles to Robert Glasper's 'What’s Wrong with That?' along with Herbie Hancock and Wayne Shorter, who played with Miles, and younger jazz artists Gary Clark, Jr., Esperanza Spalding and Antonio Sanchez. Grade: