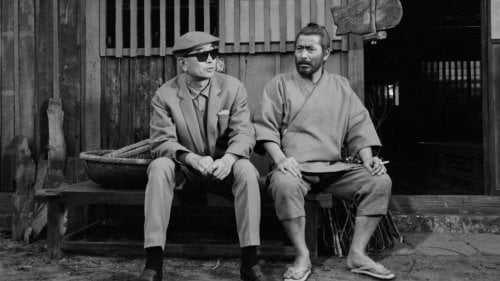 For any real film buff, the name Toshiro Mifune is one of legend and he starred in some of the greatest films in the world for one of film’s greatest directors. Longtime documentary filmmaker Steven Okazaki tells the iconic actor’s story with the help of those who knew him and others who knew of him, like Steven Spielberg and Martin Scorsese, in “Mifune: The Last Samurai.”

Writer/director Ari Aster ("Hereditary") must be working through something dark in his family history. If his first film, "Hereditary," was indebted to "Rosemary's Baby," his second clearly mimics "The Wicker Man," yet beneath these genre homages, the themes and tics are much the same - a family, dysfunctional unto death, leaves one standing in an altogether creepier one. "Midsommar" has an extra family, one in between those two extremes whose rejection of one of their own doesn't go too well for them. And like "Hereditary," "Midsommar" features intensely art directed interiors, upside down camerawork, childlike spaces (a communal camp here, a treehouse there), burials, a character with extreme facial features, head trauma, nudity and weird vocal tics. But while Pugh makes for a riveting final girl, her family history isn't as intricate nor as integral to the plot as Toni Collette's character's was. Nor was I surprised by anything that happened in "Midsommar," a claim that cannot be made about "Hereditary." Aster's sophomore film is a bit like the writing on the walls in his first - intriguing and unsettling, begging for further analysis, yet probably offering nothing more than we see on the surface. The film's opening is more portentous than we know. A peaceful evening scene of wintery Nordic splendor is accompanied by a folk song. Suddenly, it is disrupted by the insistent ringing of a phone, the scene switched to cookie cutter suburbia. Inside one of the homes, an older couple sleeps through the noise. Dani leaves a message, apologizing for the late hour, concerned about the sister she cannot reach after a disturbing text. She calls Christian to see if he's planning on stopping over. We see he's with his buddies Mark (Will Poulter), Josh (William Jackson Harper) and Pelle. Mark, an irresponsible horndog, aggressively questions Christian as to why he hasn't called it off with Dani whom Mark deems too needy by far. A gruesome revelation confirms Dani's worry, but while Christian is there for her, he seems far away. At a party, Dani learns of the Swedish trip just two weeks away. She's taken aback, but when she asks Christian why he hadn't told her, she ends up apologizing for his bad behavior. When the gang makes it to Sweden, heading directly for Pelle's communal Hårga community, he stops at its border, offering psychedelics already being enjoyed by his 'brother' Ingemar (Hampus Hallberg) and Ingemar's friends from London Simon (Archie Madekwe) and Connie (Ellora Torchia). Dani begs off, but when Christian joins her, they're both peer pressured back, Mark looking particularly perturbed, and Dani has the first disturbing experience of her vacation. When the group finally arrives at Hälsingland, they are met with Nordic pastoral splendor and symbols of the sun. Green grass sets off a people all dressed in embroidered whites either tending to goats, sheep and cattle or playing flutes. There is a hanging panel of drawings depicting an eerie love story that involves the cutting of pubic hair and a live bear in a small wooden cage only one of them sees fit to remark upon (we'd seen a fairy tale version earlier, painted on Dani's bedroom wall, which becomes more meaningful during the film's climax). Pelle describes a bright yellow pyramid shaped building as a restricted access temple. The group is led to a large hall, twin beds set around its edges, its high ceiling painted with elaborate folk drawings. Pelle describes how the community relates to the seasons, those eighteen or younger 'spring,' eighteen to thirty-six 'summer,' thirty-six to fifty-four the workers of 'fall,' fifty-four to seventy-two the mentors of 'winter.' 'What happens when you turn seventy-two?' asks Dani. Pelle draws a finger across his throat. Dani assumes he's kidding. So it is no big surprise what will happen at the first big celebratory gathering where an older couple is set off by the color of their clothing and the tears in her eyes. Aster's imagery is gruesome, but more disturbing is how quickly the anthropology students (Josh is doing his thesis here and Christian will royally piss him off when he jumps on the bandwagon) allow themselves to be calmed by leader Siv's (Gunnel Fred) words about tradition and the happiness embraced by this rite. Connie isn't having any of it though, but when she rolls out her suitcase she's informed Simon left without her, the community's truck that only has room for two returning for her. Dani never sees her again but is distracted, she and Christian separated by different activities that will serve to separate them even further. And while Josh is being familiarized with the group's unorthodox scripture, written by oracles created through incest, Mark is upsetting the equilibrium by urinating on a sacred tree. Aster's production is stunningly crafted, everything celebrating nature on the surface turning sinister at a closer look. Cinematographer Pawel Pogorzelski's trippy visuals keep us off balance, rotating 180 degrees as the group's car enters Hälsingland, a dinner table undulating, a flower in Dani's May Queen crown 'winking' at the camera. The Swedes folk costumes scream wholesome purity. The Haxan Cloak's original music portends doom. While not as deeply disturbing nor as complex as "Hereditary," "Midsommar" is far from a sophomore slump. Aster claims to be getting away from horror for his next, so it will be intriguing to watch where his talent takes him. A more overt dark comedy perhaps? Grade: