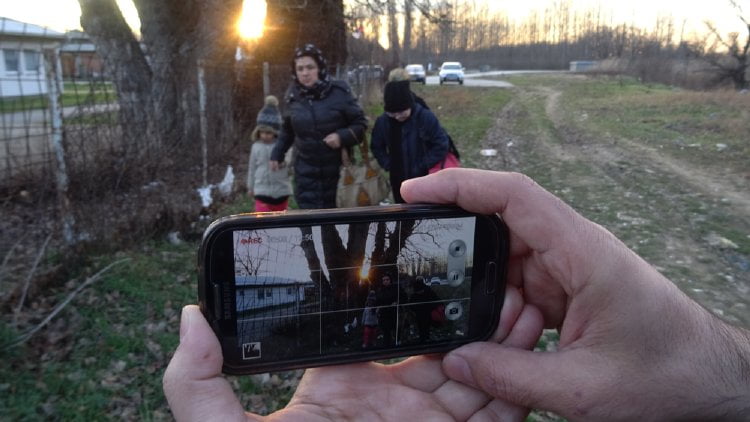 Filmmaker Hassan Fazili was very disturbed when close friend Hussein Hashemi joined the Taliban, but Hashemi granted him one last favor by warning him that a death sentence had been put on his head for his role in a documentary featuring a Taliban commander (both the commander and Hashemi were killed). Leaving Afghanistan in 2015 with his wife and fellow filmmaker Fatima Hossaini and their young daughters Nargis and Zahra, Hassan documents their multi-year journey through times of both boredom and peril using three cell phones in “Midnight Traveler.”

This intimate documentary works on many levels. Beginning in 2015 and ending in 2018, it is in one respect a family album, Nargis and Zahra growing up in front of our eyes, the family taking time out from their struggle to reach Europe to see sites, celebrate holidays and buy a pair of shoes for a growing girl. It also charts the progression of a budding filmmaker, Fazili’s shaky cell phone footage of his family’s flight interspersed with more artistic imagery, often assembled in montage. First and foremost, it illustrates the plight of the refugee during a global nationalism movement when even legal shelter can prove unsafe.

The film begins a bit chaotically, Satre’s ‘Hell is other people’ quote unconvincingly countered while the first of many Day counters provides a destination with no reason given for the sudden flight. Things settle down and Hassan provides a sequence of events, punctuated with him saying ‘Cut,’ that led to their present situation. (Hassan is the film’s credited director/cinematographer while Emelie Coleman Mahdavian is its writer/editor.)

They make their way to Tajikistan where they will wait 14 months for official asylum to be granted only to learn they will be deported back to Afghanistan. Hassan decides to try the illegal route, using a smuggler. That works for a while, getting them through Istanbul to Bulgaria where the family find themselves stranded, forced to steal food, their money stolen and their daughters’ kidnapping threatened if more is not handed over. They are arrested and sent to a refugee camp where Fatima contends with insects biting her children. Things get worse when locals begin to attack, protesting their presence. The police join in. The family hits the road again, sleeping in forests and enduring hardships until they arrive in Serbia where they will spend more than a year waiting for legal transit to Hungary. Here we will find the family at their happiest, but when they finally get what they wished for, they arrive in a very unwelcoming space.

It is astonishing to watch these four deal with their circumstances, Fatima seemingly one of the most good-natured women on earth, at least in the footage her husband has chosen to share (it also includes her telling him off for complimenting another woman, but she does so with a smile). Nargis is quite the character, but she suffers frequent boredom, her intelligence and curiosity not given enough outlets. Hassan suffers a crisis of conscience when Zahra is nowhere to be found for over an hour, the filmmaker in him imagining – and storyboarding - a horrific scene.

“Midnight Traveler” should inspire empathy in anyone who sees it. Climate change will provide yet another reason that the current refugee crisis is likely here with us to stay.

When the Taliban put a price on the head of Afghan filmmaker Hassan Fazili, he and his tiny family were forced to flee and seek asylum in another country. The trouble is the countries they seek to enter ban them from their borders, forcing Fazili, cell phone camera in hand, to record every aspect of the arduous journey of the “Midnight Traveler.”

We have seen, for years, documented stories of people facing great odds to escape repression and, even, death to find safe sanctuary. With “Midnight Traveler,” director (cameraman, video editor, co-star and producer) Hassan Fizili makes it very personal, being both documentarian filmmaker and, with wife, Fatima, and daughters, Nargis and Zahra, his subjects in the 3500 mile, three year long journey. That trek begins, on Day 1, in Tajikistan, where they are refused sanctuary and must return to Afghanistan – not a good thing for a man with a Taliban target on his back.

But, this is just the start of the many hundreds of days journey to find sanctuary and safety. Fizili, using three cell phone cameras for his three year “project,” chronicles all of the dangers, and sometimes kindness, they face during a journey made on foot, by car, in trucks and on boats. They live in tents, camping, in refugee centers and detainment facilities (like prisons) and are harassed by police and gangs who throw rocks at the migrants. They pass through, on their way to an uncertain asylum, such countries as Iran, Turkey, Greece, Serbia, Hungary and Bulgaria.

While the obstacles that face the Fizili family are daunting and, sometimes, heartbreaking and dangerous, the thing I got most out of this well-made and personal document is the stability and perseverance of the tiny family. Things may look darkest for them, but, through it all, they have each other and, for the Fizilis, that is what counts. One of the things that startled me at the end of “Midnight Traveler” is the realization that I watched little Nagris and Zahra grow and change in a mere 90 minutes.