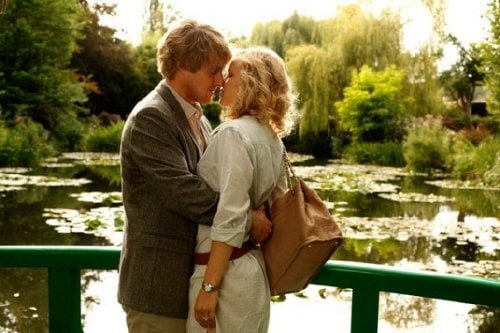 Gil (Owen Wilson) and Inez (Rachel McAdams) tag along with her parents on a business trip to Paris. For her, it is a place to shop for their upcoming wedding. For him, it is the City of Light he has always dreamed about. Gil embraces the charm of the beautiful city, while Inez wants little do with it. He also sees this as the place to finish his first novel in “Midnight in Paris.”

Hitching a ride on his future father-in-law's business trip, Hollywood screenwriter Gil (Owen Wilson) is inspired to finish the novel that is his truer calling. He finds himself at cross purposes with his fiancee Inez (Rachel McAdams, Wilson's "Wedding Crashers" costar), who has become reenamored of the ex, Paul (Michael Sheen, "The Queen"), whom she's run into, so encourages her to do her own thing while he goes off for solo walks at "Midnight in Paris." Since "Vicky Cristina Barcelona," writer/director Woody Allen's thrown a couple of downcast lowballs, so this love letter to Paris is sure to find him in favor again. "Midnight in Paris" isn't one of Allen's greater works, but it is surprising with its forward-looking message about living in the moment. It's also got charm to spare with its ingenious cast of Jazz Age artists and one of the most unexpectedly successful Allen stand-ins. Owen Wilson takes Woody's neurotic tics and smooths them out with his laid back, childlike outlook. After an establishing opening that plays like a lesser homage to Paris than "Manhattan's" was for the Big Apple, Allen goes to Monet’s Gardens at Giverny, where Gil contemplates changing his life while Inez frets about returning to the city in time for dinner with mom (Mimi Kennedy, "In the Loop") and dad (Kurt Fuller, "Wayne's World"). John clearly doesn't think much of his future-son-in-law except as a moneymaker, so talk of moving to a Paris garret doesn't impress. Then Inez spies Paul and his wife Carol (Nina Arianda, "Win Win") and Gil's roped into a couple's vacation with an insufferable know-it-all and his pronunciation-challenged partner (Sheen's hilarious and gets to spar with France's First Lady, Carla Bruni, as a Rodin museum guide). At the end of the day, Inez is still up for dancing, but Gil begs off and wanders off. Sitting on a step on Rue Montagne St. Genevieve in a gentle rain as the clock strikes midnight, Gil's coaxed to join a group of partiers from the back of their chauffeur driven antique. When he walks into a party, he could swear the guy playing and singing Cole Porter's 'Let's Fall in Love,' looks just like him, he's informed by his new friend Scott (Tom Hiddleston, "Thor") that it is indeed Cole. Then Scott's wife Zelda (Alison Pill, "Scott Pilgrim vs. the World") proclaims boredom and they're off to a club to be entertained by none other than Josephine Baker before a nightcap with Hemingway (Corey Stoll, "Salt," in a breakout role). Gil's already gobsmacked, but he's totally done in when Hemingway says he'll take Gil's novel to Gertrude Stein (Kathy Bates) for an opinion. Gil tries to bring Inez along on his time-traveling jaunt, but he doesn't figure out the significance of midnight until she's left in irritation, so just as the two begin to drift farther apart, Gil meets the woman of his dreams at Stein's salon. Adriana (Marion Cotillard, "Inception") is a fashion designer who is currently the lover of Picasso (Marcial Di Fonzo Bo), but it's clear there is a spark between her and the American from the future, and when Gil finds her diary in a current day flea market, he's determined to make what she's written come true. Allen's film delights with all the little cameos of stars and unknowns popping in and out to play famous people of the past. Adrien Brody ("The Pianist") gives goofy Salvador Dali, but he's more entertaining obsessing about rhinoceros in a few minutes than Robert Pattinson was in an entire film ("Little Ashes"). Allen tweaks cinematic history by having Gil suggest the plot of "The Exterminating Angel" to Dali's pal Luis Bunuel (Adrien de Van, "In My Skin") who fails to see any sense in it while Man Ray (Tom Cordier) finds nothing odd about Gil's tale of time travel ('But you're a surrealist!' replies Gil). Gil comes to a realization after he passes into yet another time with Adriana - back to Maxim's during the Belle Epoque, *her* concept of a Golden Age - and dines with Toulouse-Lautrec, Degas and Gauguin only to hear the trio pine for the Renaissance. In a wonderful throwaway joke, the P.I. Inez's father has hired to tale Gil, Detective Tisserant (Gad Elmaleh, "The Valet"), gets lost in the court of Versailles. The film gives Allen a chance to pull out his beloved record collection and use it in the time from which it came and so he has Gil meet Gabrielle (Léa Seydoux, "Robin Hood"), a purveyor of old Cole Porter lps, at a flea market. Aside from the character of Paul, an echo of the guy from "Annie Hall" going on about Marshall McLuhan, Allen's writing is a bit forced in the present, as it is hugely clear from the get go that Gil and Inez have absolutely nothing in common (and poor McAdams is stuck with a thankless role, all the Republican laughs going to Fuller and Kennedy). Inez doesn't like to walk in the rain. Just guess who does? "Midnight in Paris" is a charming bon-bon, a bookend to his "Purple Rose of Cairo." But it is also a refreshing take to hear the septuagenarian filmmaker who has shown a predilection for embracing the past push an alter ego so firmly into the future.

Woody Allen is well known for his love of New York City with films like “Manhattan” and “Stardust Memories.” However, in recent years he has expanded his horizons to include such cities as London and Barcelona. His obvious love of Paris, though, rivals that of his home town, the Big Apple. “Midnight in Paris” begins with a brilliant tourist montage of the streets and the sights of beautiful Paris, with a bluesy clarinet tune playing over the images. The story begins with Gil, who is in love with the idea of Roaring 20s Paris, dragging Inez around Paris to see all the sights. She is far more concerned with socializing with her parents and friends and attending snooty parties, though. This prompts Gil into taking late night walks around the city by himself and, on his first such excursion, he gets lost. While trying to get his bearings, a vintage chauffer-driven Rolls Royce pulls up and the people in back beckon him to join them. Gil throws caution to the wind and he gets into the luxurious antique car. His hosts ply him with champagne and take him to a swanky party. When he walks in, he finds himself amidst glamorous, expensively clad partiers that look like they are fresh from the 1920s. He meets a pretty American named Zelda (Alison Pill) and she introduces him to her husband, F. Scott Fitzgerald (Tom Hiddleston). Gil realizes that he is not in his own time when Fitzgerald introduces him to Ernest Hemmingway (Corey Stoll). His night of fantasy, though, must end and Gil finds himself back in the 21st Century. Gil tries to tell Inez about his exploits but she does not believe him. She is more concerned with lunching with her parents or attending supercilious art exhibits with pretentious, know-it-all friend Paul (Michael Sheen) and his wife Carol (Nina Arianda). Increasingly, Gil uses the excuse of working on his novel to get out of having to spend time with Paul, a man who pontificates on any and all subjects, even arguing with a tour guide over her knowledge of the facts of her job. When Gil tries to get Inez to join him on his midnight excursion, she goes along, reluctantly, but soon tires of waiting and heads back to the hotel. Shortly, though, the Rolls arrives and he is off on another adventure. This becomes his routine and he meets the artistic and literary giants of the time, such as the aforementioned Fitzgeralds and Hemmingway and other notables – Gertrude Stein (Kathy Bates), Pablo Picasso (Marcial Di Fonzo Bo), Salvador Dali (an amusing Adrien Brody), Cole Porter and a young Parisian beauty, Adriana (Marion Cotillard). Gil thinks his dreams of a romantic life living, loving and writing in Paris has come true. “Midnight in Paris” is a typical Woody Allen film with Gil his alter ego. This is one of the better Woody “impersonations” where Owen Wilson delivers the usual Woody lines but the actor subdues the nervous, neurotic ticks the author usually imbues in his alter egos. Inez represents the relations gone sour in Woody’s life and he makes her a selfish shrew. Which begs the question: Why would an obvious romantic, Gil, even be in the same room as cold-blooded, uncaring (for Gil) Inez? The cast of historical personae is an amusing touch and allows some of these colorful characters, especially Hemmingway and Gertrude Stein, get to shine. Michael Sheen, as know it all Paul, is the perfect pseudo-intellectual opponent for Gil/Woody to roll his eyes at. “Midnight in Paris” is best when Gil goes back in time to the 1920s. Wilson gives him the air of boyish wonder as he gets to meet the artists and writers that influenced his life. This is not the best by Woody Allen but it sure is clever and entertaining and Paris looks great.