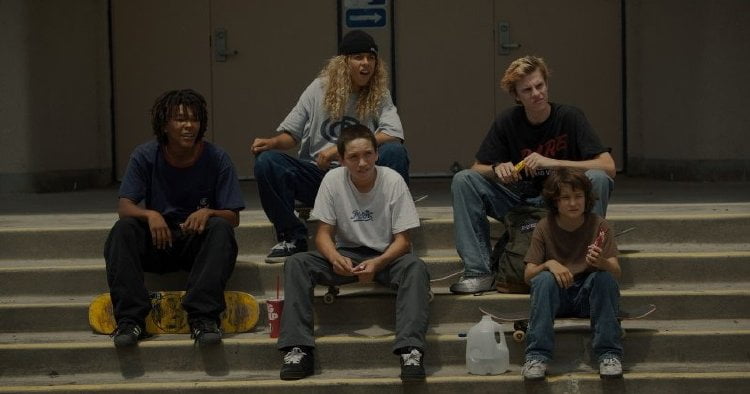 Thirteen year-old Stevie (Sunny Suljic, "The Killing of a Sacred Deer") is a sweet kid adrift in L.A., his single mom (Katherine Waterston) often absent and distracted, his older musclehead brother a taciturn bully. But when Stevie walks into a Motor Avenue skateboard shop, he's intrigued by the kids who run it and hang out there, finding his tribe in the "mid90s."

Jonah Hill makes his directorial debut with a startlingly realistic look at a young kid finding his own way through L.A. skateboarding culture. We're introduced to him receiving a vicious beatdown from his brother (Lucas Hedges) in the cramped hallway of their small home. He's told to stay out of Ian's f'in room, but later will respectfully sidle in, taking notes as he eyes his brother's CD collection for the loveliest reason, an effort that will be greeted with disregard. Standing near the door of a skateboard shop pretending to look at merchandise, Stevie is fascinated by the uproariously vulgar speculation among the much older Ray (Na-kel Smith), Fuckshit (Olan Prenatt), Ruben (Gio Galicia) and Fourth Grade (Ryder McLaughlin) about which parent they'd rather perform a sex act on. Ruben, the smallest of the group (yet still bigger than Stevie), deigns to speak to him, then lambastes him for his manners, saying 'thank you' deemed 'gay.' Stevie goes home and makes a tough deal for Ian's old skateboard, then returns. When he innocently asks if black people can get sunburned, Ray, the oldest (and only black kid), laughs in disbelief, then dubs him 'Sunburn.' Stevie beams with the acceptance of a nickname. There may be plenty of skateboarding on display (Suljic's four costars are skateboarders, not professional actors), but don't expect Steve's coming of age to be dependent upon it. Sure, he gains major respect for attempting a jump after Ruben freezes that lands him in the hospital and he is thrilled beyond measure when he finally completes a kickflip after hours and hours of practice, but "mid90s" is about belonging and Hill's placing of Stevie into such an alien environment pays off in unexpected ways, challenging our preconceptions. Explaining their names, Ruben tells Stevie that Fuckshit often expresses himself with those two words, Fuckshit immediately confirming Ruben's statement in a separate, overheard conversation, while Fourth Grade, an aspiring filmmaker who videotapes everything, is mentally stuck there. Ray is the coolest among them, so doesn't need a nickname. But if at first we view these kids as blitzed out slackers, there's something deeper going on. In a heartfelt conversation between Stevie and Ray, we learn of the seventeen year-old's deep concern for his best friend Fuckshit, whose lack of a goal in life worries him, something his actions confirm as the film progresses. The film ends with the video Fourth Grade has constructed throughout it, capturing their zeitgeist and suggesting talent. Even Ian's hostile behavior gets something of an explanation when he confides to his brother how much worse things were with their mother when he was Stevie's age, Dabney taking a more active interest in protecting her younger child - he shares something of Ruben's resentment bulked up with his rage born of his own experience. And even Dabney's view of her son's new crowd changes. When Stevie returns home drunk after a party where he's had his first sexual experience with older girl Estee (Alexa Demie), she marches into their domain, a mortified Stevie in tow, to give them a harsh tongue lashing (and note Ray's reaction). But when a climactic event occurs, Dabney, who's been in this situation before with Stevie and these friends, has a different reaction. As do we after having spent this time with them. Hill's done a great job guiding his non-professional cast, each etching out a distinct personality. Young Suljic, who defines himself in the 'still learning' phase, is an adorable moppet with his sloe eyes, shock of soft waves and dimples, his smile able to light a room. He's like a puppy following this group, always eager to be acknowledged, bereft when he believes he's been 'uncool.' Hill has embedded Suljic into an uncouth environment without the young actor ever losing his character's core values. With his hair shaved down to his skull, Hedges creates a character unlike anything we've seen from him before, a silent, simmering brute housing unknown hurt. Hill and his cinematographer Christopher Blauvelt ("Certain Women") shot the film in 16mm using the boxy 4:3 aspect ratio reflected in Fourth Grade's videos. A repeated shot of the group skateboarding down the median strip of a wide avenue between traffic becomes emotional with its last use, only the elder Ray and the littlest Stevie weaving on wheels, fun and freedom become guidance. Trent Reznor and Atticus Ross's score mostly gives way to the soundtrack featuring such bands of the era as Wu-Tang Clang. Grade: