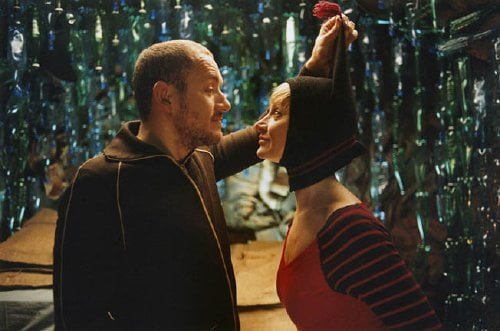 Bazil (Dany Boon, "My Best Friend") was orphaned by one weapon and left a walking time bomb by a second. Homeless and jobless after being released from the hospital, he's found by Slammer (Jean-Pierre Marielle, "The Da Vinci Code") and taken in by the band of misfits working with salvage under the care of their matriarchal Mama Chow (Yolande Moreau, "Séraphine"). When Bazil sees the logos of the manufacturers who have ruined his life on two opposing Parisian buildings, he and his adopted family plot an elaborate revenge against the corporate behemoths in Jean-Pierre Jeunet's "Micmacs."

It's been six long years since "A Very Long Engagement," the last film from cowriter (with Guillaume Laurant)/director Jean-Pierre Jeunet ("Delicatessen," "Amélie"), and while "Micmacs" clearly bares the filmmakers' idiosyncratic stamp, what was fresh in 1991's "Delicatessen" feels more a trifle in 2010. Jeunet once again revels in clockwork mechanisms, period war flashbacks, video stores, Gilliamesque animations, Dominique Pinon, pipes and plumbing and porn and its an enjoyable if not particularly memorable outing. After the young Bazil learns of his French Legion father's death from land mine, we find the adult Bazil mouthing along to "The Big Sleep" (Jeunet uses its Max Steiner score throughout) at his lonely job in a video store. Suddenly, shots begin to ring out, and, through a series of well-timed mishaps accompanied by a Tex Avery cartoon, a bullet lands in Bazil's brain. With a flip of the coin, a surgeon decides to leave it there. At Mama Chow's, Bazil meets Remington (Omar Sy), an African ethnographer who loves to type and make odd deductions from French proverbs; Calculator (Marie-Julie Baup), the daughter of a land surveyer and seamstress who measures anything instantaneously; Buster (Dominique Pinon, "Diva," "Delicatessen"), the busted up former human cannonball world record holder and Tiny Pete (Michel Crémadès), a wizard with turning junk into windup toys. The group saves their most surprising member for last, instructing Bazil to check out the refrigerator where he is shocked to find Elastic Girl (Julie Ferrier, "Paris"), a contortionist posing as a veggie drawer. Once Bazil investigates the corporate offices of François Marconi (Nicolas Marié) and Nicolas Thibault de Fenouillet (André Dussollier, "Private Fears in Public Places"), the CEOs of the two arms manufacturers who have ruined his life, he will utilize the talents of his new family and the interest of an African Emissary planning a coup (Doudou Masta) to bring them both down with a serialized plan involving Rube Goldbergesque coordination and vaudevillian and cinematic tricks. Dany Boon's left-of-center hero is tailor made for Jeunet's sensibilities, and his supporting co-conspirators each wield their own idiosyncrasy well (it's particularly fun to watch Yolande Moreau, coming off her Cesar winning performance as the tragic painter Séraphine, relish broad comedy), but "Micmacs" is more about the details than the whole, the cast plug in players for the action, not unlike the post-apocalyptic puppets of "9." The band sets off an explosion at a warehouse and all we remember is the cheesecake calendar, whose pages flip wildly in the shock wave to render its initial model nude. A kidnapping is revealed to be a symphony of foley artists. Motorbikes and cars pass or become part of self referential billboards. In an attempt to survive, Bazil lip syncs to a singer on the other side of a subway platform column, collecting her tips. "Delicatessen" and "The City of Lost Children" explored some pretty dark themes. With his wildly popular "Amelie," Jeunet was already beginning to favor form over substance, but Tautou's immense appeal turned the film into a character study of sorts. If his earlier films could be described as elaborate video games, then "Micmacs" is their pinball equivalent. B- Robin: Robin did not see this film. Back To Current Show Back To 2010 IFF