Michael Jackson's This Is It DVD 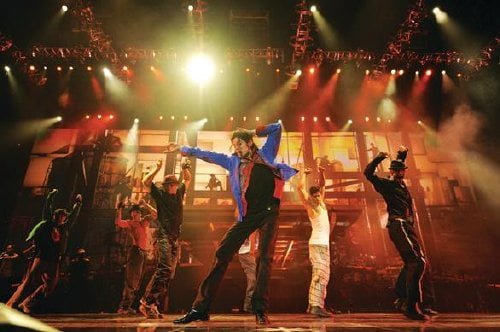 On June 24, 2009, sets, equipment and costumes for 50 live performances in London were ready to be packed up at the Staples Center, where a concert performance unlike any other had been taking shape since April. The show's star and driving creative force, Michael Jackson, was set to move to the English countryside with his three children for the show's duration. But on June 25, news of Jackson's demise shocked the entire globe. The show's director, Kenny Ortega of the "High School Musical" films, took footage shot for Jackson's own personal use and crafted it into not only a look of the concerts that might have been, but the creative process that went on behind "Michael Jackson's This Is It."

If you are one of the people perplexed by the outpouring of emotion in reaction to Jackson's death, "This Is It" may just provide an idea of what was lost that day. If you are already a fan, even a casual one, what Ortega and his editing team of Don Brochu ("High School Musical 3: Senior Year"), Brandon Key, Tim Patterson (also cinematography with Sandrine Orabona) and Kevin Stitt ("Cloverfield," "Surrogates") have crafted out of material never intended to become a film is a pretty amazing labor of love. "Michael Jackson's This Is It" may not replace the experience of seeing one of the concerts that were not to be but it gives the viewer an experience they would not otherwise have experienced while still giving one a pretty good mockup of the show itself. And this was going to be one amazing show. The film begins with the awe-struck dancers (5,000 applied, 600 auditioned, 11 got the job) from around the globe talking about what it means to be part of this before segueing to the 'tryout' of the show's opening, a giant Light Man broadcasting historical moments from the age of MJ that would open to reveal the man himself. We're shown the hysteria that greeting the show's press conference and from this moment to the last, never do we see Jackson in any other mode than ready, willing and able. His intent was to produce something that no one had ever seen before while summing up his career at a time when his kids could understand what he did and he was still young enough to do it. Ortega moves through each of the show's numbers from that opening salvo of "Wanna Be Startin' Somethin'" through closer "Man in the Mirror" (we hear Jackson singing "This Is It" over the documentary's credits - perhaps this was an encore?). Ortega and his team recreate what would have happened from various rehearsals, so that Jackson flips from a gold jacket and red pants on one line of a song to Swarovski-encrusted pants in the next. I only noticed one edit in the entire 111 minute running time that didn't flow completely from the cut before it. Split screens are occasionally employed and the director shapes his material by using each song to highlight a different technical aspect of the production. The logistics of this show were amazing. It was going to feature the largest ever (100x30') 3D LCD screen for the short films which would provide interactive backdrops - a new "Thriller" with puppets flying about the auditorium, Jackson jumping through the screen after 'acting' with Hayward and Bogie for "Smooth Criminal," an ecological fairy tale turned nightmare for "Earth song." Aerialists and pole dancing experts would have been suspended from props and pyrotechnics would explode overhead or race across the stage (which cannot fail to evoke that Pepsi commercial accident). Jackson's working habits are fascinating to watch. He was a perfectionist to the nth degree and had childlike enthusiasm for new ideas. "L-O-V-E" is frequently noted, but it is clear who's the boss. That said the working environment looks like true collaboration and everyone seems thrilled to be there, at least in what Ortega has chosen to show (he claims to have asked himself "What would Michael have done?" as he went along). And it should be noted, that while at times Jackson claims to be saving his voice and/or energy, there is not a moment when he doesn't look or sound at the top of his game. The DVD: The DVD's supplemental materials are almost as good as the film itself. In 'The Adventure Begins' we see more of the press conference announcing the show and hearing about how it came to fruition. Statistics about ticket sales are amazing. In 'Staging the Return,' we get more info on the production. In a discussion of Jackson's total fusion of song and dance, a three-way split screen is shown of Jackson's back that captures the small nuances near-identical body language during a performance. A 3D effect of an airplane, MJ Air, is shown on the Staples Center stage and it is so mind-blowing one wonders why it didn't make the final film cut. Ortega reflects on putting the film together. 'The Gloved One' is all about Jackson's costuming, led by Zaldy, a guy who never met a Swarovski crystal he didn't like, a designer who worked with scientists to take "Billy Jean's" lit up floor cubes and move the effect into Jackson's socks, pants, jacket and glove. These are true museum-worthy pieces. One might expect the segment titled 'Memories of Michael' to verge into the obsequious and maudlin, but surprise - there are some funny as well as surprising recollections. These people of all ages and races and many walks of life are intent on letting everyone know what a cool guy and true mensch Michael really was. If the final supplement, 'Auditions,' seems a bit of a let down, it is because, although it is touted as 'an event in itself,' the focus has gone from Jackson to the dancers and footage of him is limited and of lesser quality than what has come before. It is also more superficial than the other bits, although still worthwhile. "Michael Jackson's This Is It" is a DVD that anyone interesting in music, live shows and the creative process should see. And that title 'For the fans...' that appears at the beginning is no mere platitude.