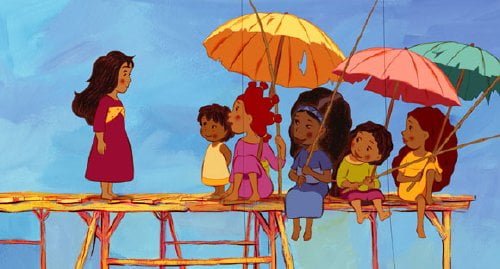 Just as her father, Pedro, is buried in the tunnel his developer/boss Jekhide (voice of John Di Maggio) is digging towards his new resort hotel, Mia (voice of Amanda Misquez) dreams of his troubles from miles away. After visiting her mother's grave, Mia sets out to find her dad and discovers a whole lot more in "Mia and the Migoo."

Producer Matthew Modine, who also voices the characters of Mr. Houston and Godfrey, brings the French animation by director Jacques-Rémy Girerd to American audiences with an English language vocal cast but, frankly, it is not the words nor the acting that matter here as much as the beautiful visuals which wear the influence of Japanese master Hayao Miyazaki on its sleeve. Miyazaki has used his films to make strong ecological statements, but Girerd's similar message is muddled, a comment on global warming here, an "Avatar"-like tree there, just as his geography appears to connect South American rain forests with hotels in Dubai. Still and all, kids should get the general idea and everyone should enjoy watching it. When Pedro gets trapped, I initially thought he was entering a coal mine - when it turns out to be an underground tunnel to a hotel that looks like Dubai's sailboat hotel, it's a little hard to get one's head wrapped around the concept. Then the too obviously named Jekhide shows up to make statements like 'you can't make an omelet without breaking a few eggs,' getting himself a workers' strike in the process. Jekhide has a son, Aldrin (voice of Vincent Agnello), who clearly is confused by dad's tactics. Aldrin's about Mia's age, so it is fairly telegraphed where the latter syllable of dad's name will take everyone. But not before the Migoo come into the picture. They're 'monsters' which made me think alternately of Miyazaki's "Totoro" and "The Snowman," whose leader is voiced by Wallace Shawn (Dany Boon in the original). They protect a giant tree. There's also a witch voiced by Whoopi Goldberg who sometimes seems to have a conflicting agenda. The animation style varies between foreground objects moving against flat backgrounds to backgrounds which include realistic looking moving water, clouds, tapirs and exotic birds. At one point, there is a beauteous tropical canopy more stunning than the most touted part of the MFA's Chihuly exhibit (the film is being run by Boston's Museum of Fine Arts). Mia looks anime, although other characters do not (Aldrin, in fact, made me think of Tintin), and the Migoo are made to look transparent, the background scenery showing brightly through their open mouths. "Mia and the Migoo" is certainly more worthy children's fare than most commercial American kid pics, but while some stunning visuals may sweep you away, the story's choppy flow will not. Still, there's adventure aplenty, including shooting waterfalls and helicopter rides, for the kids.