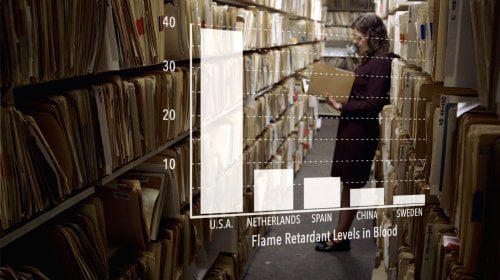 There are certain undeniable facts – nicotine is addictive, the climate is changing rapidly, cigarette smoking is bad for you. But, Big Tobacco and Big Oil have very deep pockets and can afford to hire the high-priced lobbyists and spokesmen who can spin lies in a positive way as “Merchants of Doubt.”

Inspired by the book by Naomi Oreskes and Erik M. Conway, director Robert Kenner ("Food, Inc.") looks at how PR firms, corporations and think tanks spin the media to deny scientific fact in "Merchants of Doubt." And indeed, the film is probably at its most illuminating when featuring book author Naomi Oreskes as a talking head in this unwieldy documentary. Kenner's entry point is magician Jamy Ian Swiss, who explains that *his* audiences expect to be deceived - it's a bit of comedic showmanship that smacks of Spurlock but doesn't add anything of real value. (Later he features talking heads spewing from a stack of TVs, a device right out of the Errol Morris playbook.) Kenner uses three subjects to hang his examples on - the tobacco industry, manufacturers of flame retardants (which also tie back into the tobacco industry) and climate change - but he gives so much time over to the latter that one becomes confused as to whether Kenner wants to educate the public about media shills or global warming. Everybody knows the history of Big Tobacco and its smokescreens on health and addiction issues, but Kenner takes it a bit further, pointing to the PR firm which advised them that although they couldn't deny scientific studies outright, they could cast doubt. This initial bit is familiar, but it establishes Kenner's baseline and provides some hindsight perspective with footage of Morton Downey Jr. bragging about how he looks better than his older anti-smoking talk show guest despite his four pack a day habit. More interesting is the middle case about how the tobacco industry created a new one - that of flame retardant chemicals in furniture - when it resisted efforts to create a self extinguishing cigarette by blaming the items its product caused to catch fire. These chemicals not only do not work, but cause their own serious health problems, but industry insiders used all kinds of nefarious tricks to keep the new law from being overturned. Most of the film's running time is given over to climate change and its deniers and the motivations for some of them are not what we might expect. Despite a near unanimous scientific consensus that human caused carbon dioxide is perilously endangering the planet, everything from greed to Libertarianism to herd mentality has muddied their message. The blatancy with which industries and lobbyists lie to the public (Kenner compares real agency report formats with ones copied to counter them and shows how easy it is for say, three chemical manufacturers to create a group called Citizens for Fire Safety to sound legitimate) is enraging, of course, but Kenner's pretty much negated the point of his own work here. If climate change deniers won't listen to scientific fact, how will watching "Merchants of Doubt" change their minds if he even gets them to watch it? Kenner is preaching to the converted. Grade:

The documentary begins with a magician performing slight of hand card tricks for his audience, informing us that what we see is all a distortion of reality. This is a metaphor for what documentary filmmaker Robert Kenner (“Food, Inc. (2008)” turns into an expose of the wheeling and dealing of massive corporations whose goal is to deceive the public to make money – lots of money. These well-heeled businesses hire teams of “experts” to turn negatives, like nicotine is addictive, to positives: it is non-addictive and harmless (this statement was made before a congressional committee in 1994 by a representative of Big Tobacco). Kenner brings a righteous intensity to “Merchants of Doubt” in much the way he did with his Oscar-nominated “Food, Inc.” Here, though, he does not tackle one corporate entity but several – oil, coal, tobacco, flame retardant material makers. As such, the edge of the film is blunted by trying to expose too many corporate foibles. It is all very interesting, but does not tell me much that I did not know. There is one facet of the film that I did not know, though: the reason we have possibly carcinogenic flame retardant material in all of our furniture is because the tobacco industry did not want to produce a self extinguishing cigarette. This strikes home the incredible power of corporations to institute change for their own aggrandizement. I would have preferred that Kenner tighten his focus on one or two evil corporations. As it stands, the scattershot aim tries to take down too many targets. “Merchants of Doubt” does have a lot to say and it should be said, but it should have a tighter focus.