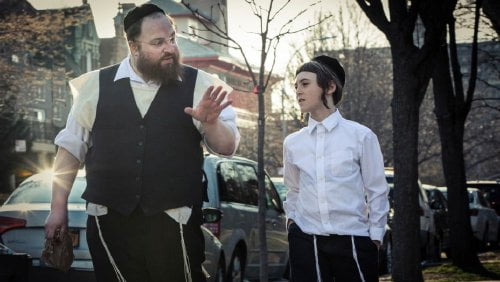 Menashe (Menashe Lustig) lost his wife a year ago and he is left to raise his son, Rieven (Ruben Niborski), alone. But, Hasidic tradition demands that a child must be reared by a husband AND wife. The schlimazel store clerk is not exactly marriage material, though, and he must change his unkempt and careless ways if he wants to get his son back in “Menashe.”

In the Hasidic community of Borough Park, Brooklyn, a thirtyish man working in a kosher market is disturbed by an unwashed lettuce a customer is purchasing, but his boss pushes back, telling him he was late and neglected to wash the floors the night before. Walking home from work, he chastises a group of unruly men for carrying on on Shabbat, but he catches hell from his brother-in-law Eizik for having taken his own son, Riven, for ice cream after school. Orthodox rules do not allow a child to live with a single parent and although the schlimazel is a God fearing man, this one law is eating away at the widower "Menashe." Cowriter (with Alex Lipschultz and Musa Syeed)/director Joshua Z Weinstein's feature debut will give most of its audience a taste of a foreign land right in New York City. Using untrained actors, Weinstein shot his Yiddish language film on the streets in which is it set, plunging us into the closely knit culture. Menashe Lustig creates an endearing character, hapless and disheveled, barely scraping by, whose every attempt to do the right thing seems fated for failure. Knowing Menashe is pining for his young son, his rabbi pushes him to find a new wife, but, as we learn, his heart wasn't even really in it his first time around and a disastrous date ends abruptly, the woman condemning all Hasidic men with the words 'Your mothers spoil you, then your wives take over.' Menashe completely rebels when Eizik informs him he's planning the memorial dinner for his sister Leah, Menashe's wife who died of cancer. He tells his brother-in-law he's perfectly capable of planning the dinner himself, then takes Riven back to his sorry one room apartment. The rabbi takes pity, granting Riven's care to the widower for the week leading up to the dinner. That week is tumultuous, father and son bonding over a baby chick Menashe keeps in his room but otherwise living like irresponsible bachelors. Riven begins to question his father's choices, asking him why he never wears the traditional hat and coat that would make him look more presentable, calling Eizik when dad has too much to drink at a gathering. But Menashe persists in his bumbling way, appealing to neighbor Mrs. Klein for her kugel recipe. 'Even a bear can learn to dance sometimes,' she tells her daughter as the door closes, but this is a bear with two left feet. Weinstein's film charts a fork in the road, his sad klutz having to choose whether to remain an outlier or conform to tradition in order to get his son back. He holds Menashe's full back story until right before the climactic memorial dinner, when the man reveals the reason for Eizik's hostility to his Hispanic coworkers. The memorial takes place in the rain, the dinner one misstep after another, buoyed by the support of the kind hearted rabbi. The next morning confronts Menashe with an allegorical truth, Weinstein's last shot conveying the man's final resolve. The handheld immersion into Menashe's world gives the film a documentary feel whether out on the bustling streets or in the close quarters of Menashe's apartment. Lustig's girth, constant sheen of sweat and sloppy dress are the outward manifestation of his ineptitude, his shuffling gait his low self esteem. Yet this unprofessional actor graces his character with a caring heart. He's like a mangy mutt with muddy paws that knocks things over but whose thumping tail and soft sad eyes wins you over. "Menashe" is an unconventional character study from a rarified world. Grade:

If you are looking for a slice of life of Brooklyn’s Hasidic community, as seen through the eyes of our sad sack hero and entirely in Yiddish, then “Menashe” is for you. Even if you are not purposely looking for a Yiddish-language movie, the story of a man trying to get his son back in the Orthodox Jewish community is a quietly engrossing and gentle character study by non-actor Menashe Lustig. First time feature film director Joshua Z. Weinstein uses his documentary skills to put us in the midst of Menashe’s life. Even though he is devoted to his son, the Talmud says that a man needs three things: a nice wife, a house and dishes – with wife the key word. Without one, Menashe cannot raise Rieven by himself and that task falls to the boy’s uncle Eizik (Yoel Weisshaus), who openly voices his disdain of his ambitionless brother-in-law. Menashe is having a tough life but I, the observer, root for rumpled and disheveled but kind and loving grocery clerk. As he tries to maneuver through the new world, as a widower, he must face disappointed rabbis and disbelieving matchmakers – “You only have one child? – And, worst of all, separation from his son. Menashe fears, rightly, that the disapproving Eizik is trying to replace him as Rieven’s father-figure. This potential for losing his son is what drives Menashe to try to change his neglectful ways – as I said, he is a real schlimazel – and make a new life.