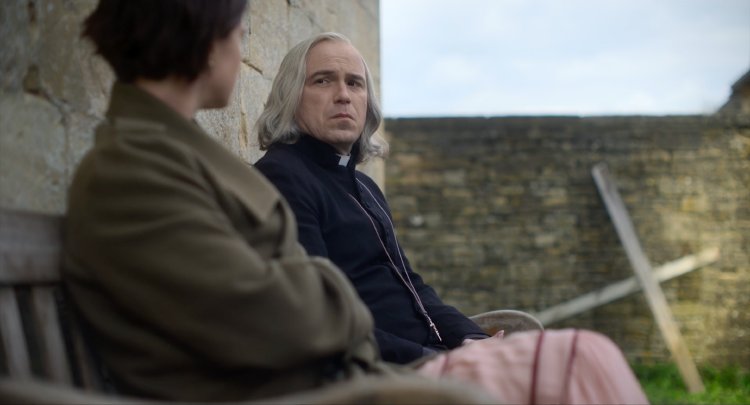 Attempting to heal from the tragic ending of her marriage, Harper (Jessie Buckley) takes a break in the English countryside, but even in that peaceful landscape, she continually feels threatened by “Men.”

I am amazed that this film was made by a man.  Writer/director Alex Garland (“Ex Machina,” “Annihilation”) uses the pagan figures of the Green Man and Sheela na gig to illustrate how dependent the human species is on both sexes (Garland’s Green Man literally blows seed into the mouth of Harper) while the human men of his English village all represent the male shortcomings which frustrate, anger and even terrify women on a daily basis.  “Men” is stuffed through with symbolism and insight although one wishes the males of his Cotswold village’s character traits had been tied more directly to Harper’s husband James (Pappa Essiedu, TV’s ‘Gangs of London’).

Garland teases out just what happened between Harper and James, after a shocking beginning in which she stands at a window, her nose bloody, witnessing James plummet from above.  In the very next scene, she’s on the road, arriving at a picture perfect country home.  She snatches an apple from a tree and bites into its crisp flesh just as the home’s owner, Geoffrey (Rory Kinnear, in the first of eight incarnations of one male), opens the door to greet her.  After awkwardly joking about forbidden fruit, he struggles with the luggage he insists on carrying and shows her about, his questions and reluctance to leave suggesting loneliness.

Harper goes for a walk, delighting in the harmonizing echoes she creates in an old railway tunnel (sound designer Glenn Freemantle weaves Harper’s cries and whispers into the film’s ambience).  But then she sees a menacing male figure at the opposite end and runs, becoming lost in the forest.  When she finally breaks out into an open field, she turns to take a picture and is chilled to see the figure of a naked man in her shot.  Later, he’ll appear outside her windows as she video calls with her friend Riley (Gayle Rankin, “The Meyerowitz Stories”) unawares.  He’ll turn threatening, reaching his arm in through the mail slot, but when police (Jimmy, played by Kinnear, and a sympathetic policewoman) arrive, he quickly submits.

This won’t be the last time Harper sees this man, who gradually morphs into the Green Man as seen carved in the font of the old stone Church she visits (its opposite side reveals the Sheela na gig).  As she reflects on James’s death and the events leading up to it, she lets out a wail.  A vicar (Kinnear) appears, but retreats, then approaches her outside and offers counseling after apologizing for a troubled young boy, Samuel (Rory Kinnear’s face digitally applied), who’d sworn at her.  Harper opens up about her troubles only to be repelled by the Vicar’s condemnation and his hand on her knee.  She won’t last long at the local pub where Geoffrey is joined by three others (Kinnear, Kinnear, Kinnear) and Jimmy tells her they’ve let her stalker go.  Back at the house, Harper is so terrified, Riley commits to the four hour drive (‘I’ll do it in three’) to join her, but things come to a Cronenbergian climax well before then.

With the exception of Samuel, most of the men Harper encounters are authority figures in one way or another, but each is flawed.  Geoffrey will admit to being told at the age of 7 ‘You have precisely the qualities of a failed military man,’ before displaying a false bravado during a home invasion.  Samuel is petulant and childish, the Vicar overpowered by sexual urges he blames Harper for, Jimmy dismissive, and yet all of these men are looking to have their own needs satisfied by this woman.  Garland’s tale unfolds in the midst of lush greenery, fertility as landscape, but there are warning signs in the deep red walls of the country house and the screams which form in the broken signal pixels of Harper’s calls with Riley.  The film is masterfully constructed, every layer of the production, from Mark Digby’s production design to Ben Salisbury and Geoff Barrow’s chorale score, contributing to the atmosphere of ancient unease.  Rob Hardy’s cinematography is jewel-like in its colorful clarity, his occasional use of rack focus a startling effect.

“Men” is a richly thought-provoking work.  To call it a treatise on the battle of the sexes would be glib.  Instead it is both horrific and achingly, pitiably human.