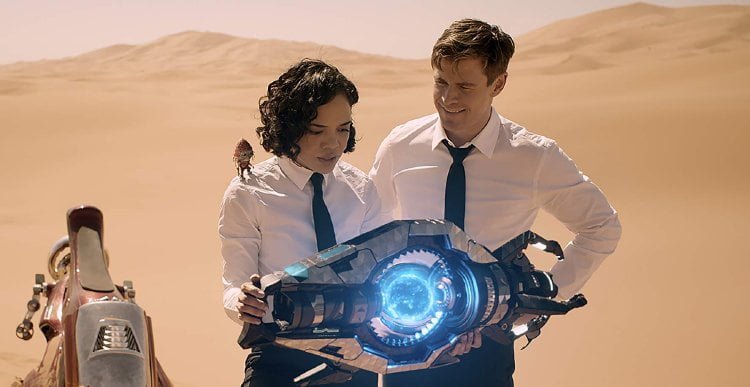 When a woman joins the secret MIB organization's London branch, High T (Liam Neeson) pairs the newly designated Agent M (Tessa Thompson) with Agent H (Chris Hemsworth). Alien attacks will send the partners around the globe as they also try to sniff out the mole in their midst in "Men in Black: International."

I haven't liked a "Men in Black" movie since the 1997 original and a refresh of agents and location cannot hide the fact that this franchise is well past its expiration date. "Iron Man's" Art Marcum & Matt Holloway try to add a twist with a new, female agent who finds the Men in Black instead of being recruited, but after Molly (Tessa Thompson) convinces Agent O (Emma Thompson, the only returning player outside of Tim Blaney's Frank the Pug) to give her a go, there is nothing here we haven't seen too many times before. Even Chris Hemsworth, that sex symbol with a sense of humor, doesn't enliven the proceedings, his best bit an in joke involving a smaller version of Thor's hammer. (The two Thompsons fare best, Tessa deserving of a far better film.) The film has two prologues. The first, which assumes we know the Men in Black are a government organization which deals with aliens among us, is set in 2016 Paris. High T and Agent H take on 'The Hive' atop the Eiffel Tower, a feat which makes them legendary. The second, set earlier in Brooklyn, shows Molly helping an alien escape through her bedroom window and watching as two Men in Black neuralyze her parents. After Molly sniffs out MiB's NYC headquarters, Agent O gives her a probationary assignment in London. She, like many, is entranced by Agent H, but once they are partnered, it becomes clear that it will be her smarts and not his instincts that are more valuable. Maybe that's because something's off. Tasked with seeing that alien royalty Vungus (voice of Kayvan Novak) has a good time during a stopover, H, who knows Vungus, parties heartily, ignoring the danger M picks up from two twins (Laurent and Larry Bourgeois) on the dance floor, men we've seen turn a man in Marrakech into a smoking pile of jelly. Vungus is targeted for assassination and just before he expires, he entrusts M with the world's most dangerous weapon, confiding that he believes H has changed (if the screenwriters intended this as a red herring for their mole subplot, it doesn't work). H's rival, Agent C (Rafe Spall), is gunning for him after this job is botched, but High T stands behind his man. Tracing a clue to an antique shop in Marrakech, H and M find its proprietor dead, along with all the aliens but one who disguise themselves as a chess set (how inspired, a "Star Wars" reference). M names the pawn whose sole raison d’être is to protect his queen 'Pawny' (voice of Kumail Nanjiani) and in return Pawny declares her his queen. This little guy is really the sole source of entertainment here, so enjoy every minute he is on screen. There will be a Moroccan flying cycle chase and a visit to H's ex, weapons dealer Riza (Rebecca Ferguson, in an ugly wig and cheesy caftan), that will reunite Molly with an unexpected ally before the whole things comes full circle for its Eiffel Tower set climax. Director F. Gary Gray ("Straight Outta Compton," "The Fate of the Furious") keeps the action moving but fails to distinguish any of his set pieces. Special effects are fine, "Men in Black's" aliens a cut above as is the effect of Vungus's weapon. But despite the talent involved, "Men in Black: International" is thoroughly mediocre, a 'check your watch' bore. Grade: