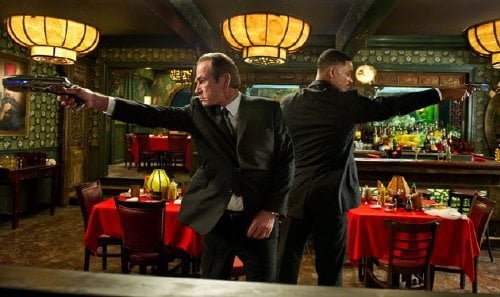 When an alien Agent K (Tommy Lee Jones) put away back in 1969 escapes, it travels back in time and kills him. Suddenly Agent J (Will Smith) finds himself in a world where he is the only one who remembers his partner's existence. So J follows the escaped alien convict back just a bit further in time and finds an Agent K he never knew - a forty year younger one (Josh Brolin) - in "Men in Black 3."

Ten years after its dire sequel, director Barry Sonnenfeld ("Wild Wild West," "Men in Black II") takes another shot at the comic book franchise with middling results. The script, credited to Etan Cohen ("Madagascar: Escape 2 Africa"), rehashes old themes without really bringing newbies up to speed, then plunges into a time travel plot that introduces ideas only to leave them dangling (and leave one with the horrific idea that the powers that be intend a fourth round). Josh Brolin does an uncanny job channeling the younger Agent K, but the film's biggest asset is Michael Stuhlbarg ("A Serious Man," HBO's 'Boardwalk Empire') as new character Griffin, a sweet alien in a constant state of evaluating multiple time and space possibilities. First and foremost the relationship between the determinedly taciturn K and younger, more engaging J is reestablished with J grilling K about his preparations for an upcoming eulogy he must give for his best friend, Agent Z. K assures J he is prepared, then stands at the service and tells everyone the deceased didn't bug people with his personal life. Situation-still-the-same. He's followed by new character, MIB boss Agent O (Emma Thompson), who delivers an alien joke that doesn't work. This is preceded by some original MIB schtick, where alien mischief is blamed on things like using cell phones on airplanes to innocent bystanders are 'neuralyzed' (i.e., memory wiped) and followed by a scene at local Chinese Mr. Wu's (Keone Young, "Crank: High Voltage") where everyone but the agents and some of the featured fare are revealed to be inhuman. Gears switch the next day when J gets up with hankerings for chocolate milk and O tells him K was killed forty years before. O figures out that the flavored milk cravings are to relieve a temporal fracture headache and J realizes that Boris The Animal (Jemaine Clement, HBO's 'The Flight of the Conchords') must have traveled back in time after his lunar jail break. This also means that the planetary shield K put up to protect earth from Boglodite attack is no longer there and that Boris's kind may no longer be extinct. Soon attack ships resembling brains crossed with jellyfish hover over the Manhattan skyline as J travels back to the day before K's death. The key question J asks O before heading to 1969 is why does he remember K and that is the key to the sentimental back story the screenwriters are trying to apply to these mismatched buddies, but, like most everything else in this film, it doesn't necessarily all add up. Once J meets the younger K (who seems to have something going on with the younger O, played by "The Raven's" Alice Eve), he continually asks what changed him only to be told that 'it hasn't happened yet.' And it never does - an editing faux pas or a stringalong? There's also a lot of attention paid to the present Boris's missing arm, shot off by K, that goes nowhere. But, like many others who've tried to jump on 'Mad Men's' bandwagon, we're given 60's style aliens, clothes, cars and the Apollo 11 launch in lieu of much else. The most fun to be had is at Andy Warhol's (SNL's Bill Hader) Factory, where we discover he was really an MIB agent who'd resorted to painting bananas and soup cans and that all supermodels are aliens. It' is also where we meet Griffin, and Stuhlbarg's creation is so charming, a mixture of love and anxiety shining out from bright blues beneath a knit pom pom hat, he almost saves the film. Rick Baker's back populating MIB's aliens and they're much the same as earlier editions. Boris has goggles where his eyes would be, sideways molars for teeth, crustacean-like killer 'pods' which enter and exit through his palms and and a foot full of toes oblivious to the physics of boots. Keep an eye on the alien board in MIB headquarters for cameos from the likes of Lady Gaga and watch the background for both present and past references to Frank the Pug. (Oddly, the first thing Agent J sees after jumping off the Chrysler building is the Roosevelt Hotel, home to this year's earlier "Man on a Ledge" - does this property's marketing team have a death wish?) "Men in Black 3" isn't as bad as its predecessor, but it's problems once again lie with the script. They've had ten years to figure this thing out, found a hook to hang it on, then still fumbled. May they all be neuralyzed.