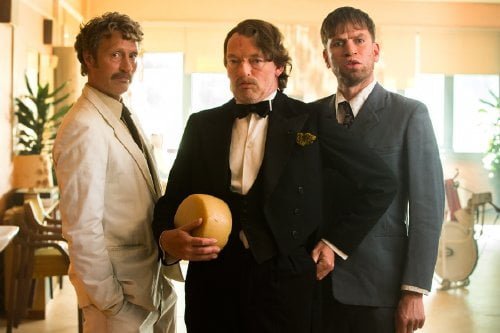 After their father dies, University professor Gabriel (David Dencik, "The Homesman," "Serena") and his even odder brother Elias (Mads Mikkelsen, "The Hunt," TV's 'Hannibal') watch a videotape he left informing them that their real father is Evelio Thanatos, a geneticist they discover is living on the Danish island of Ork. They arrive on the island and are once again surprised to learn that they have 3 brothers, all sharing the same harelip but each of a different mother in "Men & Chicken."

When he isn't writing screenplays with Susanne Bier and other Danish auteurs, writer/director Anders Thomas Jensen creates his own black comedies. "The Green Butchers" featured Mads Mikkelsen as a butcher selling human meat while "Adam's Apples" was about the relationship between a priest (also Mikkelsen) and a neo-Nazi gang leader. Now, with "Men & Chicken" (its Danish title "Men & Hens" is more fitting), Jensen's given us an absurdist comedy featuring his country's most prominent acting talent in near-unrecognizable roles about the value of life, even given the societal extremes wrought by tampering with nature. The seemingly normal Gabriel is strangely reluctant to have his brother join him at their father's deathbed, but we understand once we've seen Elias's odd come-on to a woman in a wheelchair. Gabriel has the occasional vocal tic, sounding like a strangled bird, but the oversexed Elias must take frequent, noisy bathroom breaks whenever he's been exposed to a female. Arriving on Ork, the two are picked up by Ingrid (Kirsten Lehfeldt), one of the few remaining constituents of her brother Flemming (Ole Thestrup, "The Green Butchers," "Adam's Apples"), the mayor. Observing the sleepy town, Elias promptly declares it is 'no place to live, there's not a soul to sleep with.' The mayor is the one who advises the two about their three additional half brothers, their father having acquired a rep as 'the sausage of death' as all his wives died in childbirth. His nervous daughter Ellen (Bodil Jørgensen, "The Idiots," "The Green Butchers") adds to the local legend recalling that one of the brothers 'beat her with a beaver.' When they venture out to Evelio's institute the next day, chaos ensues, Gregor (Nikolaj Lie Kaas, "Open Hearts," "Angels & Demons") insisting they leave, Franz (Søren Malling, "A Hijacking") attacking with metal tubs and taxidermied animals. Elias is happy to join the melee, winning Franz's approval by fighting back with a concealed rolling pin. Gabriel and Elias move into the dilapidated institute, which also houses a stud bull, bunnies, sheep, geese, turkeys and chickens, a salacious favorite of Gregor's. Gabriel and Franz butt heads as Franz tries to enforce his rules (no going into dad's room or basement, no 'touching' the bull) while Gabriel tries to replace their violent conflict resolution with conversation and move the animals outside. Then he notices a chicken with cow's hooves. The film gets more and more bizarre, Elias promising a trip to 'find women' if Gregor helps he and Gabriel get into the basement. Then there's brother Josef (Nicolas Bro, "Adam's Apples," "War Horse"), always looking for an opportunity to raid the cheese larder or expound on any number of arcane subjects. No matter how crazy or violent their behavior, Fleming does everything in his power to keep them from being committed in order to keep his catastrophic residency numbers from plunging further. Utilizing their father's research (uncovered by Gabriel in that basement) the brothers reciprocate in Jensen's twisted idea of a heartwarming climax. Jensen's clan suggests "The Texas Chainsaw Massacre's" Slaughter family by way of the Three Stooges as reimagined by John Waters. While he thankfully keeps most of their baser behavior offscreen, he conjures up images one might regret if one weren't laughing so hard, so fearless is his cast. Who would have ever thought the cooly elegant Mads Mikkelsen could so convincingly play an addled, harelipped, obsessive masturbator prone to slapstick violence? Each of the brothers are distinct, Dencik able to pass in society, Malling his less fortunate, angrier, country counterpart. Lie Kaas, sporting a bowl cut, is a more earnest cousin of a Monty Python Gumby. Bro, hampered by obesity as well as heredity, filters a keen intelligence through a warped upbringing. Makeup and special effects are outstanding, all manner of creatures modified in startling ways. The lunacy is complemented by original music by Frans Bak (TV's 'The Killing') and Jeppe Kaas ("The Green Butchers," "Adam's Apples"), an orchestral score as unconventional as the brothers' genealogy. Grade: