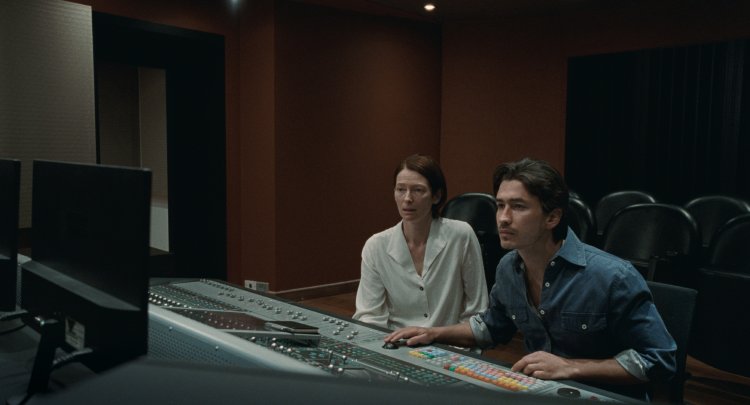 Jessica Holland (Tilda Swinton) awakens in her Medellin apartment to the sound of a reverberating boom.  She tells the man whose poetry she’s been translating, Professor Juan Ospina (Daniel Giménez Cacho, "Zama"), about this strange phenomenon and he refers her to sound engineer Hernán Bedoya (Juan Pablo Urrego) in the university’s music wing.  A friendship develops and Hernán offers to drive her two hours into the country on an errand, but when it is time to leave he is nowhere to be found.  Jessica drives herself and meets an older man named Hernán (Elkin Díaz) who helps Jessica understand her sensitivity to “Memoria.”

Writer/director Apichatpong Weerasethakul’s ("Cemetery of Splendor") first film made outside of Thailand (in English and Spanish) harkens back to the natural, spiritual and ancestral themes of his Thai films while literally encompassing the more universal.  Through Jessica (and Swinton is the perfect collaborator), Weerasethakul contemplates our interconnectedness with all things, from both a human and universal perspective.

The film can be thought of in two parts, ‘young’ Hernán corresponding with Jessica’s connection to the technological, modern world, ‘older’ Hernán the natural, historical world.   The first half takes place in Medellin and Bogota (the film was Columbia’s submission for the International Oscar).  Jessica visits her sister (Agnes Brekke) in the hospital where Karen tells her she has been dreaming of an injured dog she took to the vet’s but then failed to follow up with (stray dogs will be a continual presence).  Later Jessica will join Karen, Karen’s husband and son for dinner and hear her brother-in-law’s theory that his wife became sick because of a spell cast by the ‘invisible’ Amazonian people she had been researching.  Jessica is baffled when Karen tells her she received several texts in the hospital from a dentist Jessica believes died a year ago.  No one but she hears the three booming sounds that occur during this scene.

We will observe Jessica as she interacts with both the arts (poetry, music, painting, sculpture) and science (medicine, botany, forensic archeology).  The former is most stunningly observed when Jessica searches for Hernán, passing students in musical sound booths and stopping to listen to a jazz quartet perform ‘Sala de Ensayo’ (aka ‘Recording Studio’), the latter when invited into an archeological ‘morgue’ to touch the hole drilled into a woman’s skull ‘to let the spirits out,’ perhaps a connection to Jessica’s own situation.

The second half of the film changes pace with longer takes in two locations.   Exploring the lush countryside, Jessica finds a new, older Hernán scaling fish by a bubbling brook.  He appears to know about her and they have a long conversation, she marveling at all he’s ‘missed’ (sports, news, the iPhone) with his simple life in one location, he taking a higher view.  Hernán lies down on the ground and goes into a suspended state (Jessica had been visiting to observe floral refrigeration units which ‘suspended’ their deterioration, an errand seemingly forgotten).  When he comes to, he invites her to his home, pours some strong, local drink and Jessica begins to remember not only her own infancy, but Hernán’s past as well.  (A more modern invocation of a noise suggesting the past occurs in the first half, when a Medellin bus backfires, causing one man in a crowd to dive to the sidewalk.)  Weerasethakul rather cheekily reveals the potential source of the booming noise which has been haunting his heroine.

“Memoria” is not a film for the casual moviegoer, but those willing to absorb its mysteries will find much to ponder.

Some (like my partner and fellow film critic) think that the languid, snail slow pace of “Memoria” – with extended static shots when nothing happens (well, a fly may buzz by) – is the director’s choice and embrace every frame. I wholeheartedly agree, when those frames actually tell a story. An auteur’s long and languid reflections on life are all well and good, but they are not entertaining for moi.

Neon is presenting "Memoria" in a theatrical roadshow which commenced on 4/1/22.  Playdates may be found here.