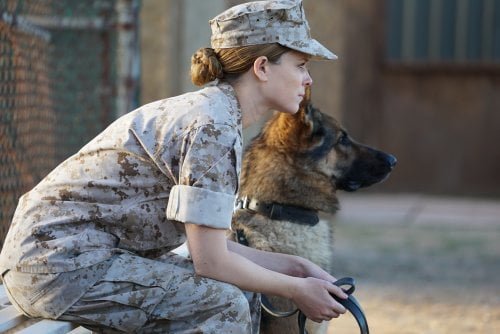 Megan (Kate Mara) has had a steady string of failed jobs, is 20-years old and at loose ends in life. The local US Marine recruiting office inspires her to enlist, but she screws up and gets punishment duty cleaning out the K9 dog cages. This leads her to become a combat dog handler and she and her canine partner, Rex, are deployed to Iraq where they help save many lives in “Megan Leavey.”

In 2001 Valley Cottage, NY, twenty year-old Megan (Kate Mara, "Morgan") was aimless, bouncing through a series of unfulfilling jobs, receiving no emotional support from her mother Jackie (Edie Falco) and despondent over the recent drug overdose death of her best friend. In order to save herself, she joined the Marines, becoming a bomb-sniffing dog handler. But after a serious injury, she returns home, devastated to be separated from Rex (Varco), the German Shepherd who saved her life. With the advise of her dad Bob (Bradley Whitford, "Get Out"), she fought once again to save the dog deemed unadoptable in "Megan Leavey." "Blackfish" director Gabriela Cowperthwaite makes her feature debut with this true life story about one woman leaving everything behind and finding love in a war zone. The film has some pacing issues, but Cowperthwaite succeeds conveying the tremendous bond between soldiers and their dogs and the terrifying conditions in which they work. Cowperthwaite and screenwriters Pamela Gray ("Conviction"), Annie Mumolo ("Bridesmaids") & Tim Lovestedt lay their groundwork with lightning speed, Megan zipping through boot camp and becoming a Marine only to be let down by mom again when she arrives late for the ceremony. Not having dispensed with her hard-partying ways, Megan is called to the carpet after a night of drinking finds her in an embarrassing situation and assigned to cleaning kennels in the K-9 Division. She becomes fascinated and works overtime for Gunny Martin's (Common, "Selma") favor, first being humiliated by being paired with a can rather than a canine. When another trainer has his hand broken after a bite from Rex, Megan is teamed with her nemesis. A kindly sergeant, Andrew Dean ("Harry Potter's" Draco Malfoy, Tom Felton), encourages her progress, giving her tips on how to better bond with the dog. Upon arrival in Iraq, Megan is immediately split off from her fellow classmates, but fellow dog handler Matt Morales (Ramon Rodriguez, "Need for Speed") befriends her. Told she cannot go out on missions because 'she's a girl,' Megan is assigned to checkpoint duty where her naive hearts and minds approach earns her a reprimand. But one night, Megan is called to go out and, leading Rex, uncovers a weapons cache. But when she and Rex are called into service in Ramadi, they are targeted by a remote controlled IED, both injured in the blast. Megan earns a Purple Heart as she insists on fronting the troops who go in to find the perpetrator with her dog. But when Rex eventually follows her home, Dr. Turbeville (Geraldine James, "45 Years") classifies him unadoptable because of aggressive behavior Megan identifies as PTSD. Kate Mara's restrained performance accentuates Leavey's otherness, a loner who only begins to open up with Rex by her side. Support is solid, Rodriguez an amiable love interest, Felton cast against type in an affecting role. But while the filmmakers give the latter his due, the romance, enlivened with a humorous Yankees/Mets rivalry, is written off with one line. The wrap is rushed, Edie Falco's Jackie, a horrible mother who won't allow her ex in the house, suddenly sitting aside him, all smiles with boyfriend Jim (Will Patton). "Megan Leavey" keeps expanding and contracting, but it's all heart. Grade:

This is a straightforward, true life story about a girl and her dog. This girl and dog, though, are a highly trained and capable bomb sniffing team whose job is to find the dreaded IEDs before they can do deadly harm. Kate Mara gives an unadorned but effective performance as Megan arcs from being a directionless screw-up to become, with Rex, true heroes. What “Megan Leavey” does best is to show the absolute bond of loyalty between the young Marine corporal and her best friend, Rex. The bond between the two grows steadily as the story plays out, beginning with their first, not-so-friendly meeting to the developing trust (both ways) and bomb-detection training. The bond is made solid in the field when the team proves itself able to get the job done and save lives. Documentary filmmaker Gabriela Cowperthwaite (“Blackfish” (2013)) brings that factual capability to her first feature film. The pace of the bulk of the film follows Megan from enlistment to the boot camp montage to graduation and Megan first assignment – Rex. When the action shifts to Iraq, it is down and dirty and it feels like we are part of Megan and Rex’s missions to sniff out bombs. When the bomb detection team is sent on patrol to clear an area of IEDs, the filmmakers put you into the action, not just an observer. When you see the scope of danger that the team routinely experiences, there are many “aw, sh*t” moments, not just for the players on the field but for us, the spectators, too. The honest you-are-there feel of the film make it compelling. “Megan Leavey” changes direction and tone when Megan and Rex are injured on a sweep. Though injured in a blast the corporal and her dog complete their mission. But, the damage to both causes their separation and the remainder of the film is about Megan getting her best friend back. I have to admit, the sentimental softie in me got a bit verklempt over Megan’s plight and reunion with Rex. (That is not a spoiler, by the way.) This is a movie that makes you to be a part of it, feeling the fears, hopes, danger and love of its true life characters.