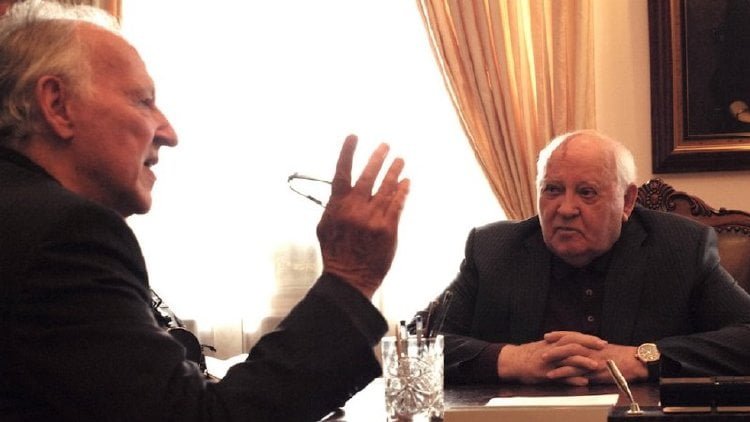 My favorite documentary filmmaker, Werner Herzog, takes on a world icon, telling the life story of the man who, ultimately, dismantled the Soviet Union in “Meeting Gorbachev.”

It is a bittersweet experience to hear Werner Herzog recount Gorbachev's history. The man who succeeded the 'old fossils,' including his mentor Andropov, had a distinctly different mind set from his predecessors, one rooted in fairness, prosperity and peace. It was a time of Perestroika and Glasnost and nuclear disarmament. If only "Meeting Gorbachev" had gone a little further in analyzing the switchback that occurred as the Soviet Union began to break apart (Gorbachev merely talks about how other leaders got ahead of his agenda), it would have been more trenchant. Still, Herzog's affection for the former Soviet leader comes through loud and clear and gets Gorbachev to tell us what he would like inscribed on his tombstone - 'We tried.' Grade:

As a student of history and politics, bio-pics about world leaders are a no-brainer. I am going to watch them. Add to that the involvement of the great Werner Herzog, directing (with co-helmer Andre Singer), narrating and interviewing the man himself – Mikhail Sergeyevich Gorbachev – and I am sold. Herzog and company follow chronological lines as we learn the story of two things: the life and rise to the pinnacle of the government of the Soviet Union of Gorbachev and the history of the USSR through the man’s life, up to and through the fall of the Berlin Wall and dissolving of what Ronald Reagan called the “evil empire.”. Mikhail G is an excellent interview subject and Herzog gets some good banter and back and forth with him as they discuss his involvement in modern world history. His insights into fall of the Soviet Union and what should have or could have been are a viewpoint not discussed much – until now.