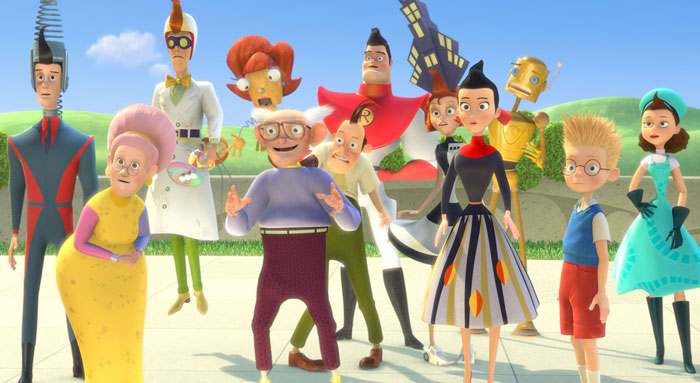 Young Lewis (voiced by Daniel Hansen and Jordan Fry) is a brilliant inventor. His latest gizmo, the Memory Scanner, will, he thinks, reunite him with his long lost mother and, finally, fulfill his dream to have a real family. But, when the dastardly Bowler Hat Guy steals the invention, Lewis’s hope may well be shattered. Enter Wilbur Robinson (voice of Wesley Singerman) who claims to be from the future and can help Lewis. The new friends jump into Wilbur’s time machine to save the time yet to come and they set off to “Meet the Robinsons.”

Orphaned Lewis is an inspired inventor who scares off potential parents with the disastrous results of his failed experiments, but when he concocts a machine that rebroadcasts memories he no longer cares, intent on 'remembering' the mother who abandoned him as a baby. But when he enters his machine in a Science Fair, he runs into Wilbur, a kid who insists he's an agent from the future who must save Lewis from a mysterious man in a bowler hat, and Lewis is whisked years ahead to find a new family and 'Meet the Robinsons.' The craft of 3-D has come a long way, but with "Meet the Robinsons" it continues its tradition as a gimmick employed on second rate features. This totally derivative family flick cops its lead from "Jimmy Neutron," its villain from "Dudley Do-Right" with motivation borrowed from "The Incredibles," its robot from "Robots," its monsters from "Toy Story" and "Edward Scissorhands's" topiaries. Cross the Addams Family with the Simpsons by way of the Jetsons and throw in the WB frog and you'll have a close approximation of the Robinsons. Of course Wilbur isn't who he claims to be, but someone far more significant in Lewis's life. When Lewis meets the family of eccentrics, he and Wilbur seem merely to be kids in trouble for wrecking the family car, which in this case happens to be one of two time machines in existence, but gradually events from the past begin to correlate with what he observes in the future and the Robinsons's celebration of failure becomes a significant harbinger of invention. "Meet the Robinsons" is certainly bright looking and zips along at a nifty pace, yet still, despite some cute set pieces, it grows wearisome. It's best moment by far is an astonishing bit of understatement - when Wilbur takes Lewis back in time to see his mother, he steps back from looking at her face. But he *has* seen his mother - the loving and supportive Mildred (voice of Angela Bassett), the woman who ran the orphanage. "Meet the Robinsons" is harmless enough entertainment, but as a paean to Walt Disney, whose 'keep moving forward' motto is repeatedly used here, "Meet the Robinsons" it is seriously lacking.

Think “The Jetsons” meet “Jimmy Neutron” in this latest work to come out of the Mouse House. The big draw to “Meet the Robinson, for the younger set and the curious adult, is the amazing 3D technology that, literally, jumps off of the screen. This is a good thing as the story for “MtR” breaks no new ground and merely goes through its paces to the inevitable happily-ever-after ending. Lewis was abandoned as a tiny baby at the orphanage run by kindly, loving Mildred (voice of Angela Bassett). She raises him, and her other wards, with compassion, encouraging (sometimes with a bit of concern) Lewis’s inventive propensities. His latest gadget, he thinks, will win first prize at the science fair but, when he demonstrates it, things go terribly wrong. Despondent over his failure, Lewis is about to give up when Wilbur arrives on the scene to convince the young orphan to persevere. Lewis isn’t convinced that Wilbur is right so his new friend decides to show him what the world will become if the young inventor sticks with it. He whisks Lewis decades into the future where Lewis is amazed at what the world could become with his imagination and inventing skills. They arrive at Wilbur’s home where Lewis is introduced to his large, eccentric and quite lovable family. But, the Bowler Hat Guy (Stephen J. Anderson), with his spider-like mechanical hat named Doris, throws a wrench into the works by stealing the Memory Scanner and presenting it as his own invention. Lewis and Wilbur must stop BHG and Doris before they irrevocably change the future world from ideal to horrific. At first, the slick 3D technology of “Meet the Robinsons” created quite a stir in the primarily young audience attending the screening. They were thrilled with the jump-at-you effects of robot heads and other objects seeming to come out of the screen. Cool stuff to watch and amaze but it quickly becomes background to the pretty conventional save-the-world story. Although Disney Studios had acquired Pixar Animation recently, the digital dynamo company is not involved in the making of “MtR,” and the lack is notable. The characters in “Meet the Robinson” are more suited to the smaller TV screen and it is only due to the power of 3D technology that the feature is coming to the local multiplex. The wow of having objects jump out at you fades quickly as Lewis’s story unfolds and the quirky Robinson family, the Bowler Hat Guy and Doris are introduced. One exception is the initially frightening but soon quite lovable Tiny, the T-Rex (voice of Joseph Mateo). I always look forward to the release of a Disney animation but, in recent years (with the exception of Pixar’s contributions), I have become more and more disappointed in the routine nature of the stories these films utilize. The old, traditional 2D animation is being replaced by such high tech innovations as digital anime and 3D. The reliance on these new millennium technologies has supplanted solid storytelling as the makers use visual slight of hand in place of well thought out plots. Meet the Robinsons” reps decent entertainment for the youngsters and the curious oldsters but is too slight a story to draw in older kids and adults, groups that used to be a sure shot draw to Disney animations. There is one interesting curiosity that leads off MtR” – the 1953 Donald Duck/Chip and Dale 3D cartoon that was a first for Disney’s animation team. It is an interesting bit of nostalgia but not enough to make one want to rush to the theaters. Oh, yeah, the old white cardboard, blue and red lens 3D glasses we have come to know and hate are now a thing of the past, replaced by more normal looking specs. The new glasses are not enough to make “Meet the Robinsons” a must see.