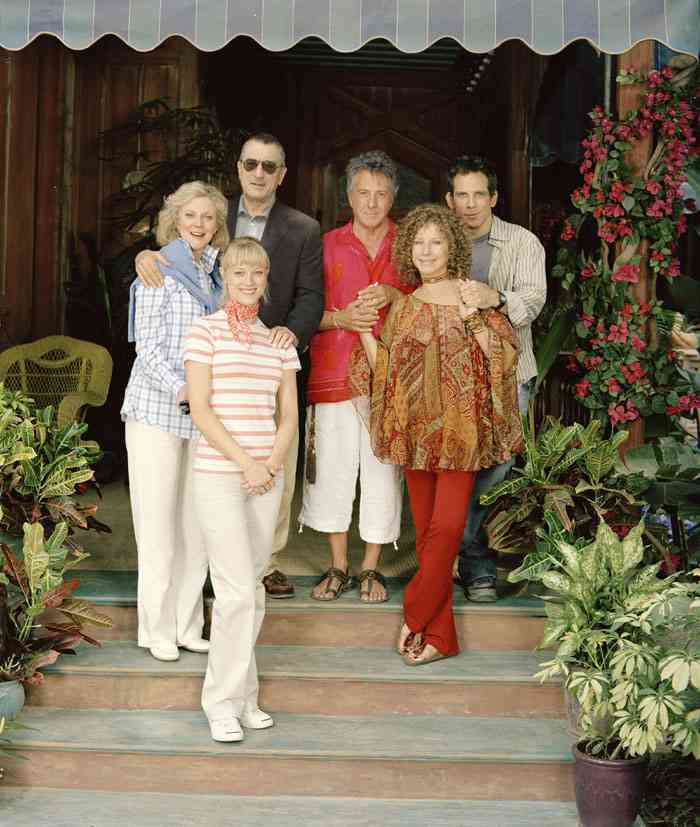 Male nurse Gaylord ‘Greg’ Focker (Ben Stiller) made it over his first hurdle toward matrimony with Pam (Teri Polo) when he met his future in-laws, Jack and Dina Byrnes (Robert De Niro and Blythe Danner). Now, with the wedding just months away, he faces an even greater obstacle to his marital plans when he must bring the Byrnes family to Florida to “Meet the Fockers.”

The original “Meet the Parents” had Nurse Greg trying to make a good impression on the Pam’s parents, especially retired CIA agent Jack, but failing miserably at every turn. This comedy of errors did good enough box office to prompt director Jay Roach to helm the sequel, this time adding Gaylord’s tree-hugging, free-love, ex-hippie parents, Bernie and Roz (Dustin Hoffman and Barbara Streisand), to the mix. Control freak Jack unilaterally decides that they are not flying to Florida for the big family meeting. Instead, he pulls up to the Byrnes residence in a hi-tech, luxury RV with all of the comforts of home and announces their imminent plan to hit the road. It also turns out that Pam’s nephew, little Jack (Spencer Pickren and Bradley Pickren), is staying with her parents and is coming along for the ride. Jack, obsessive as ever, is teaching the toddler with his progressive methods that forbids any affectionate contact with the child. Jack’s rigidity will soon stand nose-to-nose with Bernie and Roz’s Earth Father and Mother in a contest over whose child rearing methods are best. Jay Roach continues to mine the trials and tribulations of Greg Focker as he maneuvers the dangerous future-in-laws waters, this time burdened by the politically incorrect but lovable Fockers. Hoffman and Streisand (an actress I normally dislike) are a wonderful addition to the comedic mix with their relaxed, laid back lifestyle and penchant for randy sex. Streisand, in particular, brings full dimension to Roz, a sex therapist specializing with the elder set. Hoffman, with his hugs-and-kisses demeanor, revels in the love-of-life Bernie, too. Ben Stiller foregoes his usual slow burn character and keeps the nice-guy-who-wants-to-do-the-right-thing persona from “Meet the Parents” and the actor gives free reign to his senior costars and their clash of cultures. De Niro carries on with his straight-laced, paramilitary Jack who is always looking for a way to put Greg down. Blythe Danner gives grace to what is usually an almost invisible character as Jack’s loyal wife. Some of the funniest moments in “Meet the Fockers” involve the teaching and childcare mistakes that Greg makes with little Jack, much against the rigid rules that Jack laid down for the care and feeding of LJ. There is the usual slapstick and bathroom humor – here, quite literally, when the Focker’s diminutive dog is flushed down the toilet by the Byrnes’s vengeful cat. Another amusing thread has Greg trying to call his parents but keeps getting their answering machine – priceless. Meet the Fockers” is a sequel but in a good way. They kept the original premise of Greg bending over backwards to please his father-in-law-to-be but there is more of an edge this time around as the Fockers rally around their son and support him at every turn. Streisand and Hoffman helps to soften the hard edged humor and the two vets are welcome addition to the sequel. I laughed at much of the humor and, for 114 minutes, I was entertained. “Meet the Fockers” is good holiday fare that lets you suspend disbelief and have some fun.