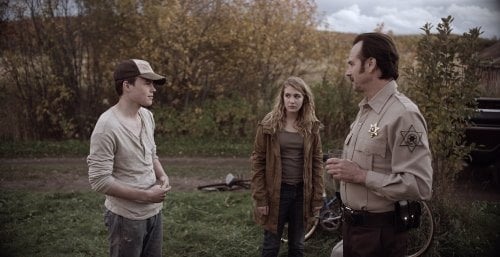 15-year old Jonas’s (Josh Wiggins) life changes when he meets his pretty new neighbor, Casey (Sophie Nelisse). But, her father, Sheriff’s Deputy Wayne Caraway (Bill Paxton), wants his daughter to have nothing to do with the boy. But, Wayne has something to hide and, when Jonas learns what it is, his only thought is to save Casey in “Mean Dreams.”

When Casey Caraway (Sophie Nélisse, "The Book Thief," "Monsieur Lazhar") moves into a rural town with her cop dad Wayne (the late Bill Paxton) and dog Blaze, the first person she meets is neighbor Jonas Ford (Josh Wiggins, "Hellion," 2015's "Max"), a young teen yoked to the responsibility of his family's farm. But something's a lot more disturbing in the Caraway household, where Casey's cowed manner refutes Wayne's easy going cheer. Once Jonas understands the depths of Wayne's depravity, his entire focus becomes saving Casey in "Mean Dreams." Why this Directors Fortnight selection from the 2016 Cannes Film Festival is mostly skipping theatrical release for VOD is beyond me. Canadian director Nathan Morlando channels Jeff Nichols and early Malick in both his material and artistic sensibilities, his film a more heroic, humanistic twist on "Badlands." While the trailer may indicate something close to "Cop Car," this is an entirely different animal, something which makes us feel deeply for the powerless (screenwriters Kevin Coughlin and Ryan Grassby). With its exceptional cast and bleak yet stunning landscapes (cinematography by Steve Cosens, "Born To Be Blue"), "Mean Dreams" is not to be missed. When Jonas first meets Casey's father, he gets a genial 'call me Wayne,' but when Casey knocks on Jonas's door, she's met by Lynette Ford (Vickie Papavs), a seemingly drunk and disheveled woman who slams the door in her face. Jonas's father Elbert (Joe Cobden, "Arrival") keeps the boy on a tight leash, citing keeping Lynette in 'rum and cigarettes' as a necessary financial consideration for a family barely scraping by. Nonetheless, one can sense a deep understanding and love for his father from Jonas whereas Casey installs a bolt lock on her bedroom door. After Jonas tries to intercede when Wayne, a mean drunk, drags Casey down the stairs and beats her, Wayne holds his head underwater in an outdoor trough, warning him that their next interaction will be more final if the kid ever sets foot on his land again. Jonas approaches the town sheriff, but is met with dismissive disbelief and a rare attempt to talk to Elbert gets him a dressing down for poking his nose in a cop's business. When he can't raise Casey on the walkie talkie he's given her, Jonas goes to the Caraways, forced into hiding in Wayne's covered flatbed and taken for a ride. What he witnesses is worse than he'd imagined, but he gets away with the cash stuffed bag cash Wayne's collected and barely makes it into the woods with Casey and Blaze, Wayne on their heels. These two underage kids and their dog are pretty conspicuous, so they keep to minor roads, camping out. Jonas takes a risk, buying an off-the-books Colt 38 from a suspicious gun store owner. A bad storm forces them into a motel and if you were wondering if Blaze would turn out to be "High Sierra's" Pard, you'd be right, but not in the way you'd expect. Wayne's shady partner, The Chief (Colm Feore, "Thor"), is surprised to be outwitted by the young boy, but his warning that they longer they run, the worse things will get is ominous. Bill Paxton is menacing indeed in this, one of his two last films to be released since the beloved actor's death. Paxton imbues Wayne with a moral struggle, one he's clearly losing as he fights for 'control.' He and Nélisse perform a dance on the edge, she attempting to not step on the triggers lying beneath the outward approval of his 'angel.' Nélisse opens up around Wiggins, who's phenomenal here as the hard working, loyal kid who believes goodness deserves reward. The screenwriters have given Wiggins a heartbreaking payphone exchange with Elbert that speaks volumes with scant dialogue and Nélisse a third act soliloquy which gives the audience an astounding reversal of perception. The film, shot in Sault Ste. Marie, Ontario, sets these characters in ramshackle, asphalt shingled homes surrounded by flat fields and verdant woods cast in yellow days and purple twilights. "Mean Dreams" and its young lovers on the run have an aching, breathtaking beauty. Grade:

One thing that comes to mind thinking about “Mean Dreams” is Shakespeare’s Romeo and Juliet. We have two young people in love but their star-crossed relationship is threatened by family. Here, instead of feuding families, we have Wayne, an obviously corrupt cop and a drunkard who beats his daughter and Jonas’s dad, who fears authority. Okay, I am pushing the Shakespeare comparison but Jonas and Casey are certainly star-crossed lovers. The story, by Kevin Coughlin and Ryan Grassby has a done-before feel (my Shakespeare thing?) but the caliber of acting by the young stars and the menacing performance by Bill Paxton as the ruthless dad make “Mean Dreams” a cut above.