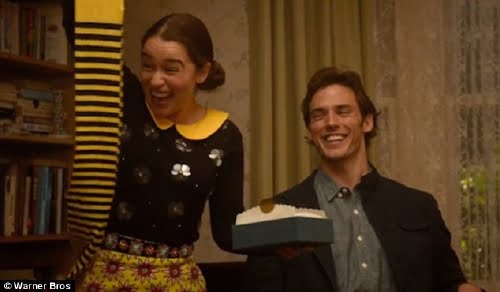 Will Traynor (Sam Clafin) is a successful young banker with a lust for life until tragedy strikes. Louisa Clark (Emilia Clarke) is a pretty young clerk who has just lost her job and is desperate to find another. These two lives will become entwined in ways that neither ever expected in “Me Before You.”

When the cafe she works at in a small English town closes, unskilled Louisa Clark (Emilia Clarke, "Terminator Genisys") must find work to help support her struggling family. She's thrilled when she lands a well paying six month gig as a caregiver for the son of the town's castle owning aristocrats, Steven (Charles Dance, "The Imitation Game") and Camilla Traynor (Janet McTeer, "Insurgent"). But Will (Sam Claflin, "The Hunger Games'" Finnick Odair), a handsome quadriplegic, isn't initially inclined towards Lou's blue collar ray of sunshine. After enduring his bad behavior for weeks, Lou breaks, telling Will off, and he begins to let her know "Me Before You." The joy radiating from Emilia Clarke and Sam Claifin's eventual surrender to it take "Me Before You" longer down the road than anticipated, but novelist Jojo Moyes, adapting her own best selling weepie, exploits such a controversial notion for her third act obstacle that it is difficult not to come away from it spinning. This romantic rejigger of "The Intouchables" works on its own cliched terms for a while, even ending with a hopeful coda, but the film's climax, which may have even worked had its reasons and ramifications been explored, feels like a cheap shock tactic. The film opens introducing William Traynor as a handsome, hotshot London financier with a global, extreme sports lifestyle and a blond beauty in his bed. Moments later he's about to be struck by a motorcycle. We then cut to Lou, a small smiling bundle of klutzy energy aspiring to Sally Field's style in "Hello, My Name Is Doris," making the senior patrons of her cafe's day. At home, dad Bernard ('Downton Abbey's' Brendan Coyle) is out of work and Lou's vying for funds with sister Katrina (Jenna Coleman, TV's 'Dr. Who'), a single mom wishing to finish school, so it's off to stump the local unemployment office. Lou, dressed in one of mom Jodie's (Samantha Spiro, "From Hell") suits from the 80's, doesn't exactly nail her interview with Camilla, but she's hired anyway, given a quick overview by Will's visiting nurse Nathan (Stephen Peacocke, "Whiskey Tango Foxtrot"). She offers to make tea a lot and when Will expresses a desire for quiet, she retreats to watch the clock tick. Once she tells Will off, though, the ice is broken and, with her honest expression of 'really needing the money,' he begins to look outside himself. Will advises Lou that she needs to expand her horizons. She thinks his subtitled DVD "Of Gods and Men" is gay French porn, then, when he insists she watch it with him, is surprised by how much she loves it. Having gotten a little into Will's world, Lou makes it her mission to get him back into it as well. A day at the races, a Mozart concert, her own birthday party and even Will's ex's wedding follow, Lou's boyfriend Patrick (Matthew Lewis, "Harry Potter's" Neville Longbottom) watching the inevitable happen from the sidelines. Then Lou finds out just why she's only been contracted for six months. While first time feature director Thea Sharrock has gotten really good performances from her ensemble, she hasn't achieved a smooth flow, many scenes feeling underbaked and rushed. Snowfall is followed by a spring exterior with no sense of time elapsing. Patrick, who's dated Lou for six years, just fades from the picture. AbFab's Joanna Lumley pops up with advice at a wedding and disappears as quickly. Sex is handled way too coyly, a PG-13 'did-they-or-didn't-they.' Clarke is so endearing here, she makes you want to fall in love with the film. Her excitement receiving a pair of stripy tights is infectious and relatable. She may be the incarnation of the manic pixie dream girl, but Clarke's talented enough to make us believe. As for Claflin, he's the Adonis struck down in his prime, wry amusement overcoming sullen self pity - Claflin could corner the market as his generation's Hugh Grant. If only his handicap hadn't been relegated to an inability to do for himself and predilection for pneumonia (Clarke's Lou is never charged with facing harsh day-to-day realities). McTeer does to the manor born, Dance softening her, while Coyle and Spiro offer a down-to-earth embrace. Stephen Peacocke makes an impression as the efficient and compassionate nurse. The film makes the most of its fairy tale setting (Pembroke, Wales, and its castle stand in for 'Traynor-town'), but Craig Armstrong's ("Love Actually) score is the stuff of sugary, generic romcom. Given where the film is heading, it's disingenuous. "Me Before You" has a lot going for it, before it serves up unjustified martyrdom. Grade:

I am not the kind of person who willingly goes to see young adult romance films. Usually, when forced to succumb, I do not enjoy the experience – I am not a young adult and have not been one in decades. That said, first time feature director Thea Sharrock with scripter Jojo Moyes (adapting her own YA novel) creates a work that, despite its morbid understory, exudes joy and love for life. Will’s tragedy is mundane in its genesis. Walking across the street to take a taxi, he is struck down by a motorcycle, making him a virtual quadriplegic. Louisa, after losing her job and the paycheck her out-of-work parents rely on, interviews for a caretaker job for, you guessed it, Will. His mother (Janet McTeer) hires the perky young woman on the spot with job her being to cheer the angry young man up. This seemingly routine young romance conceals something more: a wonderful chemistry between Emily Clarke (whose costuming is a character unto itself) and Sam Clafin (who has the good looks of a young Christopher Reeve). Clarke’s claim to fame is as the Mother of Dragons in the TV series “Game of Thrones,” a role I am not familiar with, so she is a fresh face to me. The young actress bowled me over with Louisa’s bubbly, optimistic attitude toward life. I never once felt that I was watching “acting” as she refuses to give in to Will’s self-imposed bitterness over his plight – a life he loved left behind. Things are not all light and laughter, though, as the story deals with the serious matter of being a quadriplegic – see “The Intouchables (2011)” and “The Sea Inside (2004)” for two fine films that deal with the subject in very different ways. The way “Me Before You” handles the subject may seem a stretch for some, but it helps drive the urgency that Louisa faces in doing the job Will’s mother gave her. I find it astounding that I actually like a film that should have triggered a gag reflex in me. This, I think, is because of the believable connection between Louisa and Will and the performances that mold their respective characters. Call me a sentimental old thing but