Me and You and Everyone We Know 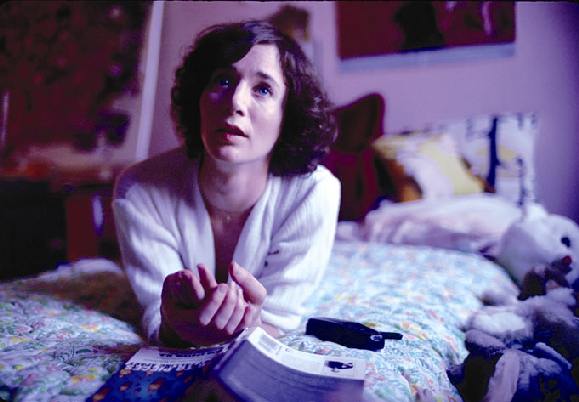 Christine Jesperson (writer/director Miranda July) is a media artist who supports herself driving an eldercare services taxi. When she takes Mike (Hector Elias, “Envy” ) to buy a new pair of shoes, she is intrigued by the salesman, Richard Swersey (John Hawkes, HBO's "Deadwood"), who explains that shoe fitters no longer touch clients' feet. Richard is recently separated and raising two young sons, Peter (Miles Thompson, "Thirteen Conversations About One Thing") and Robby (Brandon Ratcliff), who spend their free time on Internet chat rooms. Richard's colleague and the two young girls he flirts with, the director of the contemporary art museum and an odd little girl are also all represented in the aerial representation Robby draws with a computer keyboard and titles "Me and You and Everyone We Know."

Writer/director/star Miranda July (actress, "Jesus' Son"; writer (story) "The Center of the World") made a splash at Sundance and co-won the Cannes 2005 Camera D'Or with this hit and miss reflection on interpersonal communications in the Internet age. At times funny, sinister, quirky and bittersweet, July's film is also obvious, contrived and too precious by far. July herself is an arresting screen presence, with a clear, inviting face, but her character is an aggressively quirky oddball. Christine locks onto Richard like a heat-seeking missile, determined to forge a relationship out of apparent thin air. Richard is one of those guys who is too sensitive, too mystical and obviously the creation of a woman. He lights his hand on fire as a ceremonial rite to mark the dissolution of his marriage (and to feel, feel, feel!), yet is astonished that his wife (Pam, played by JoNell Kennedy) is tired of his emotional reactions to every little thing. In a more amusingly realistic bit, Christine, encouraged by Mike and his girlfriend Ellen (Ellen Geer, "Criminal"), takes a tape of her work directory to museum director Nancy Hannigan (Tracy Wright, "The Five Senses," "Last Night"), who refuses to take it from her hands. One must suppose that July's satiric look at the workings of the art museum is based on first-hand experience and her view is affectionately biting. She also makes her central point best with the character of Hannigan - first in a totally unexpected and hilarious arranged meeting and later in an exchange with the artist herself. The adults interact with the kids (the film's most ill-considered strand involves Richard's coworker writing increasingly pornographic window messages for two teenage girls - Rebecca (Najarra Townsend) and Heather (Natasha Slayton)), but the kids have a whole layer of the film to themselves as well. In a bit that manages to be both creepy and funny at the same time, little Robby forges a relationship with a stranger in a sex chat initiated with his older brother and innocently sets off an adult's bizarre fantasy with his concept of 'pooping back and forth' (which he draws like this --> ))<<>>(( ). An adult man's seeming preference for the 'taller' of the two girls makes them initiate a blind 'taste test' of their oral skills with Peter, and they're all observed with horror through the window by Peter's ten year old Betty Crocker-in-the-making neighbor Sylvie (Carlie Westerman, "A Cinderella Story"). Peter seems more interested in Sylvie's hope chest (and their scenes together are awkward, inexplicable and haltingly acted, even though Westerman has a spookily assured presence) than sexual gratification. The charm of July's film is most evident in an early scene, beautifully directed and edited, in which the fate of a goldfish becomes heart-stopping drama and suspense. Yet the filmmaker also hits us over the head with her bookending juxtaposition of a bird in a tree with a photograph of said bird being hidden in a tree. "Me and You and Everyone We Know" certainly marks the emergence of a unique filmmaker. Hopefully by her next film, she'll have matured beyond this film's 'look at me!' cleverness.