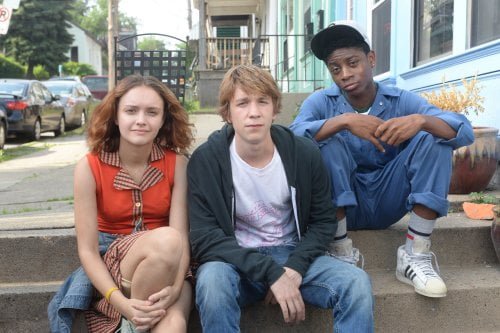 Greg Gaines's (Thomas Mann, "Project X") plan to survive high school is to stay anonymous by forging shallow relationships with members of its various cliques so they'll leave him alone. He refuses to deal with the cafeteria, which he describes as a war zone, instead eating lunch in history teacher Mr. McCarthy's (Jon Bernthal, "Fury") office with Earl (newcomer Ronald Cyler II), the neighborhood kid he's been parodying classic films with for years. But when his mom (Connie Britton, TV's 'Nashville') gets word that Rachel Kushner's (Olivia Cooke, TV's 'Bates Motel,' "The Quiet Ones") been diagnosed with leukemia, she insists Greg spend time with his classmate, and his senior year becomes all about "Me & Earl & the Dying Girl."

Hmmm, here's the latest Sundance hit to be enthusiastically embraced, the third consecutive double winner of its Grand Jury and Audience prizes. It's not without its pleasures, notably the performances of its two titular actors, but it plays as if a Wes Anderson wannabe made a mashup of "The Fault in Our Stars" and "Be Kind Rewind." There are several instances of directorial duplicity and there is no denying that the character of Earl is quite the stereotype, despite the actor portraying him's delicious deadpan delivery. Lastly, one has to wonder what's up with Olivia Cooke's weird typecasting - after TV's 'Bates Motel' and last year's "The Signal," this is the third project the actress has appeared in wearing a nasal canulla. 'It was the best of times, it was the worst of times' Greg intones over his stop motion animation film before going for the more original 'This is the story of my senior year, how it ruined my life and how I made a film so bad it killed somebody.' Note that although he admits to as much in the film's opening minutes, Greg will later assure us that Rachel survives only to explain that less-than-reliable bit of narration as wishful thinking. It's more like one of several instances of director Alfonso Gomez-Rejon's (2014's "The Town That Dreaded Sundown") bait and switch tactics like all the world cinema classic parodies we hear about Greg and Earl making but which we never really see, instead getting lots of bad title puns ('A Box o'Lips, Wow,' 'Death in Tennis'). Jesse Andrews's adaptation of his own novel works best showcasing the real friendship that develops between Greg and Rachel, buffeted by shared in-jokes based on their offbeat senses of humor, something Greg doesn't even recognize he has. Mann and Cooke conjure up real teenaged awkwardness fumbling into mutual appreciation. Rachel's single mom Denise (Molly Shannon, TV's 'SNL'), coping with copious slugs of Chardonnay, is thrilled when Greg shows up at their door, but Rachel doesn't want pity from a boy she barely knows, rejecting the initial joke that has her mom guffawing. When he admits he's there because his mother 'forced' him, she isn't initially swayed (and we won't know what Denise thinks because Greg's shot is reframed to exclude her, a problem swept under the rug), but after spending a few uncomfortable minutes together, Greg finally breaks the ice by admiring Rachel's scatter pillows, then achieves a slam dunk with his very un-PC advice on how to thwart unwanted sympathy. Earl, who's introduced via a twee Wes Anderson-esque pan to a house 'in the bad part of town,' backgrounded by a belching factory and foregrounded by his bro with a pitbull, says little but when he does it swings wildly between titty commentary and smarter-than-his-years observations. He's also willing to try any of the weird exotic foods, liked dried squid, whipped up by Greg's dad (Nick Offerman, TV's 'Parks and Recreation'), a tenured sociology professor who never gets out of his bathrobe, shaves or appears to leave the house. Greg never refers to Earl as a friend, but a 'colleague,' which is a good thing because if friendship is based on trust Earl seems to spill everything Greg wishes to remain private (off camera, the better to preserve Earl's taciturn screen presence). The film's two main drivers are Greg's reluctance to apply for college and the film 'hot girl' Madison (Katherine C. Hughes, "Men, Women & Children") says he and Earl should make for Rachel. Along the way there will be an inadvertent drug trip blamed on Mr. McCarthy's soup, more situations with Denise that should be branded child abuse but are played for sympathetic comedy and a 'Knight to Remember' themed prom which Greg gets invited to on the day of by the least likely person imaginable. Gomez-Rejon also shines reflected light on his film with tons of Werner Herzog references and snippets of classic film scores. It's too bad the filmmakers feel the need to undercut the meat of their story with so much whimsy and cartoonish situations. It's no surprise that production designer Gerald Sullivan was the supervising art director of Wes Anderson's "Grand Budapest Hotel" and "Moonrise Kingdom," but where Anderson creates his own worlds, Gomez-Rejon makes Pittsburgh doodles. There is one effective use of this predilection in the film's epilogue if only it hadn't been wrapped in heavily foreshadowed sentimentality. South Korean cinematographer Chung-hoon Chung ("Oldboy," "Stoker") relies so heavily on wide angle shots they quickly lose their effectiveness. "Me & Earl & the Dying Girl" gets a lot right about teenaged behavior and its central friendship is true and touching, but the filmmakers almost succeed in drowning out the good with too many geegaws and baubles and questionable choices. Grade: