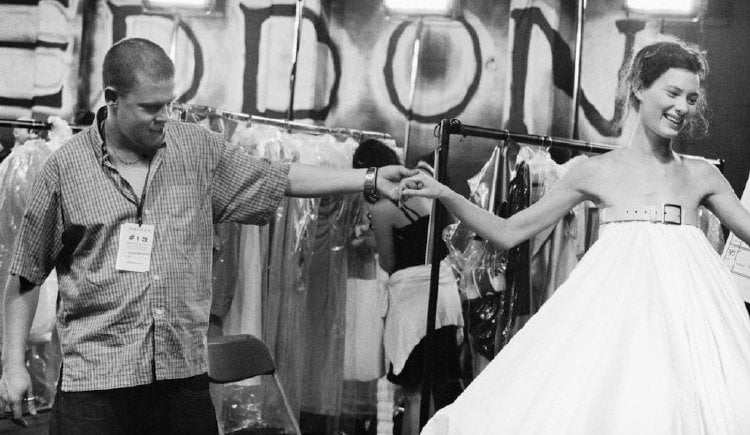 A pasty, pudgy punk from working class East London had a habit of amazing people in entirely different walks of life. The youngest of six and son of a cab driver first impressed a Savile Row tailor with his incredible ability to cut and construct. The founder of Saint Martin's School of Art's Fashion course, Bobby Hillson, describes her confusion at the rough looking young man who showed up on her doorstep, confusion which turned to admiration for how his lack of formal education turned into fresh perspective. After incurring both outrage and admiration for his early collections, at the age of 27 he was installed as lead designer at Givenchy. But scaling the heights of the fashion industry brought paranoia, drugs and depression to Lee Alexander "McQueen."

Director Ian Bonhôte and codirector/writer Peter Ettedgui ("Listen to Me Marlon") have fashioned a documentary as idiosyncratic as their subject, from raw home movies to elegantly styled cutaways of elaborately adorned golden skulls set against black backgrounds. Dividing their film into five chapters, each centered on a specific McQueen collection, the filmmakers stitch together the fabric of a beguiling artist but are less successful illuminating what tore that fabric apart. Our initial view of Lee is a happy one, a kind of Everyman skinhead happily playing with his dog in his kitchen. It was his beloved mum, Joyce, who suggested the son always drawing clothes apply for a Savile Row internship, his older sister Janet detailing how he could take a piece of fabric, draw an outline, cut and craft a perfectly tailored garment. Both of these women had huge impacts on Lee's development, Joyce's historical books and Janet's abusive marriage cutting deeply into his psyche. McQueen's eye for beauty and penchant for darkness came together on his catwalks, his St. Martin's graduate collection, 'Jack the Ripper Stalks His Victims' creating a sensation with its Victorian inspired blacks, blood reds and human hair. London fashion editor/icon Isabella Blow was so intrigued by the clothes' movement, she bought the entire collection and became the designer's muse (it was Blow who suggested Lee use his middle name for a posher presentation). His Scottish Jacobite background informed his next collection. The Highland Rape show, featuring models staggering down the runway in ripped clothing with exposed breasts, was seen by many as misogynistic (McQueen's intent was a portrayal of strength during genocide), but its tartans would be forever associated with the designer. The beauty of the Scottish Highlands also brought other elements to his work, birds and falconry and even live wolves. McQueen's shows were shows in the truest sense, performance art on a razor's edge. When a prop car caught fire, McQueen insisted it be allowed to burn, the show going on more dramatically. His 'No. 13' collection culminated with supermodel Shalom Harlow in a voluminous white dress gathered above the bust assaulted by two robots spraying black and yellow paint onto its canvas. McQueen brought all his pals to Givenchy save one - Isabella Blow - causing a severe rift in the friendship. They upended the fashion house, Lee shocking workers by eating alongside them in the basement cafeteria. They worked hard, but had fun, a bunch of kids running rampant. His first collection there, Search for the Golden Fleece, was a marvel of white and gold, but reception was divided, the sight of the twenty-seven year old in slouchy pants and sneakers holding an open beer not what Paris expected. Lee took an offer from Tom Ford, a huge cash infusion into his own line and returned to London. He also began to morph into industry expectations, drugs and liposuction slimming his frame. Things were never the same, the designer's newly decadent lifestyle playing out in paranoia. His shows scaled new heights with more elaborate productions, Voss deploying 'mad' models within a one-way view glass cube inspired by a padded cell culminating in a recreation of American photographer Joel-Peter Witkin’s ‘Sanitarium.' One wonders how the brilliant designer would have fared had he followed his benefactor's footsteps onto a film set. Despite his bad treatment of her, Blow's death at 48 was a shock (the 'lovers without sex' had reconciled - to a degree - beforehand as described by her widow Detmar). The gay designer was never lucky in love for any length of time either. Friends stylist Mira Chai Hyde and assistant designer Sebastian Pons speak of increasing talk of suicide followed by periods where all seemed well, but the death of his mother was another blow, one which he failed to recover from. McQueen committed suicide at the age 40 the day before her funeral. Ironically, he had just unveiled the collection many thought his best, Plato's Atlantis inspired by fish and fowl. This elegantly constructed documentary is accompanied by music from Lee's favorite composer Michael Nyman ("The Cook, the Thief, His Wife & Her Lover"), including the commissioned work 'Lee’s Sarabande.' Even the film's ending credit roll is stunning, featuring 'Savage Beauty,' the museum touring collection of his work collapsing into kaleidoscope effects. "McQueen" may leave parts of the man a mystery, but it is an exemplary document of his artistry, leaving us wanting more. Grade:

Lee Alexander McQueen (1969-2010) was an infant terrible of the international fashion industry for much of his short, rags-to-riches career that ended abruptly when he committed suicide shortly after his mother’s death. His life is examined and chronicled in McQueen.” I know of Alexander McQueen and his career mainly because of my fashion maven wife and fellow critic, Laura. (I think she has a McQueen knockoff. I think.) Beyond that, though, I knew next to nothing about the designer, his work and his life. After sitting through the nearly two-hour documentary by co-directors Ian Bonhote and Peter Ettedqul, I learned some of the facts of that life but, in the end, I found myself feeling uninvolved in McQueen’s story. The one aspect of “McQueen” that I did find interesting and wanted to know more about was his longtime relationship with his muse, fashion editor Isabella Blow. Their years-long collaboration ended abruptly when McQueen cut her out of his life. I wanted to know more about that. The rest of the film is rife with the designer’s controversial runway shows with titles such as the Highland Rape collection. Personally, I do not like his fashion and, as one truly ignorant about haute couture, I am definitely an outsider and not the audience “McQueen” is aimed at. That audience will likely enjoy “McQueen.”