Mayor of the Sunset Strip 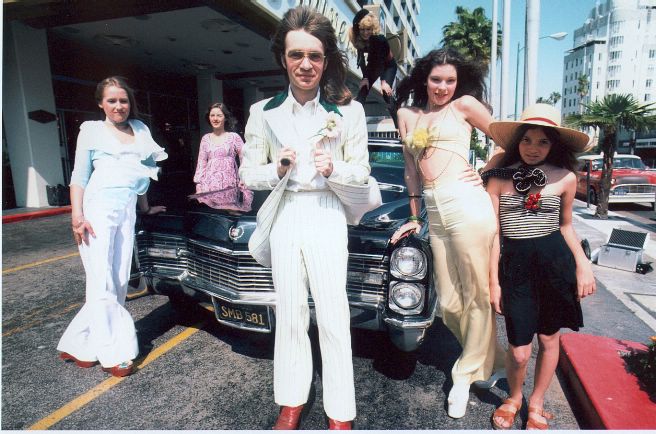 Monkee Davy Jones's film double., Sonny and Cher's pseudo-son. Buddy of David Bowie. Former disco owner and KROQ DJ Rodney Bingenheimer is responsible for countless careers while his own has devolved into a midnight to 3 a.m. slot on Sunday. Yet those in the know still recognize Rodney as "Mayor of the Sunset Strip." Writer/director George Hickenlooper's ("Hearts of Darkness: A Filmmaker's Apocalypse," "The Man from Elysian Fields") highly entertaining documentary succeeds on three levels. It is the portrait of a man who mingles with stars but lives in a hovel, a chronicle of four decades of cutting edge music and a revelatory look at our celebrity-obsessed culture. Bingenheimer was born of a father who moved to L.A. to become a movie star, but contented himself taking home movies of celebrity golf tournaments, and a mother who was an autograph hound. Rodney's mom, now deceased, kept a shrine to her son's brushes with fame. An early photo reveals the young boy against a bedroom wall plastered with TV Guide covers. When Rodney was just sixteen, his mother left him on the doorstep of his idol, Connie Stevens, and drove away, not reappearing for several years. Forced to make his own way, (Connie wasn't home), Rodney gravitated towards the Sunset Strip and soon the soft-spoken, 5'3" Rodney was a mover and shaker in the music biz. Today Rodney still hangs with the stars, who all express genuine affection for the man. David Bowie, who was introduced to LA by Rodney, still makes time for his old friend and Courtney Love relates how Rodney was part of her fame agenda. Deborah Harry digs out her old Bingenheimer tee shirt for her interview and rock groupie extraordinaire Pamela des Barres relates that Rodney was the first man in Hollywood she made out with! (Her husband, rocker Michael des Barres, says that in the day Rodney had the allure of a drug dealer, but his drugs were young, nubile women and Robert Plant claims Rodney got more chicks than he did.) Mick Jagger calls him a groupie. In one brilliant montage, classic rocks scenes with the likes of the Beatles, Beach Boys, the Doors, John and Yoko, Hendrix and Elvis, all having arrows pointing to the young Rodney, in the thick of it all. So why, after knowing and helping the creme de la creme of rock for decades, isn't Rodney rich and famous himself? Maybe he's just been too nice of a guy and too much of a fan. Tellingly, Rodney mentions the Payola scandal and says he shouldn't have profited just for playing songs on the radio. (Just as an example, Rodney put Oasis on the airwaves via a cassette tape before they were signed by a label.) Hickenlooper asks his subject if he wishes his life had turned out differently and Rodney admits that things could have been a little different. 'I have very few close friends' he admits before Hickenlooper showcases a middle-aged musical wannabe who's kept off the streets by Rodney's generosity. The only time we witness Rodney getting angry is when his protege and co-broadcaster Chris Carter gets his own, better-slotted radio show. Hickenlooper does a beautiful balancing act of portraying Rodney both in the midst of fame and existing on its edges by those he associates with. A very hyper Lance Loud is a friend and interviewee. A hilarious moment finds Rodney's dad and stepmom perplexed by a signed photo of Kato Kaelin in their collection. 'He just sent it to us' says dad. A fondly amused celeb recounts how the VIP section in Rodney's English Disco club was just a velvet rope around a table 'two feet away from everybody else' because 'that's just how Rodney was.' "Mayor of the Sunset Strip" is an engrossing piece of work that begins on a high note of humor and the exhilaration of the times and winds down with a melancholy, quiet air. Hickenlooper's portrait of Bingenheimer takes a rock footnote and finally gives him center stage.

Rodney Bingenheimer. He knew Elvis, fed the Beatles shrimp, launched the career of David Bowie, was the double for Davy Jones on “The Monkeys” TV show, had a long-running early Sunday morning radio program at LA’s KROQ and played the Sex Pistols when no one else would. The life of this odd little man who helped shape the music scene in southern California for decades comes under the microscopic lens of documentary filmmaker George Hickenlooper. Rodney may be almost, but not quite, famous but he has certainly earned his title, “Mayor of the Sunset Strip.” “Mayor” is a rather remarkable little docu in that its title subject, Rodney Bingenheimer, is a diminutive, unassuming guy who, as his story unfolds, accomplished some truly amazing things for others in the music biz. His was the face that launched a thousand careers as Rodney’s membership in the LA in-crowd gave credence to many future stars from Bowie to Courtney Love to Debbie Harry to The Sex Pistols to Coldplay. Bingenheimer’s support for many young musicians was often enough to get their demo records heard and their rise in musicdom set into motion. Hickenlooper chronicles Rodney’s life from his time as a boy when his father moved the family to LA to become a movie star. Dad didn’t make it into movies, though, and settled for filming celebrities, primarily pro golf stars. Rodney’s mother became the consummate autograph hound and set into motion a lifestyle for her son that he would follow all of his life. As Rodney got older he became a fixture in the LA music scene and, because of his small stature (5’3”) and amiable, helpful nature, was accepted on all levels of the business. The roster of stars, soon-to-be stars and wannabe stars that the documentary maker lists for us is impressive, if not astounding. Vintage film footage and current interviews abound through “Mayor of the Sunset Strip,” with such music biz notables as Mick Jagger, Joan Jett, Joey Ramone, Paul McCartney, Nancy Sinatra, Phil Spectre, Pete Townsend, Brian Wilson, Neil Young, Sonny and Cher – the list goes on and on – all singing the praises for their friend Rodney. But, celebrity is a fickle thing and, as the years passed, Bingenheimer’s fame did not keep pace with the many that he helped to stardom. As Hickenlooper’s camera follows Rodney in his day to day life he shows us that the man has not capitalized on the friends he helped make famous. He lives in a small apartment stuffed to the rafters with music memorabilia he has collected over some 40 years. He has a collection of autographs, letters and photos of the rich and famous that would impress the most aggressive celebrity hound. He also has a mountain of other memorabilia including a shirt worn by one of the Monkees on their hit 60’s TV show and a driver’s license given to him personally by Elvis. This list of items, like the list of musicians he helped, goes on ad infinitum and is astounding. Rodney may be struggling to survive, but if he liquidated his collection (as if he would) he would be a wealthy man indeed. But that simply is not Rodney Bingenheimer’s way. When Hickenlooper recently asked Rodney if he would change his life if given the chance Bingenheimer replies in the affirmative. But, as we look back over his illustrious, near famous life, it makes one wonder if he really would. “Mayor of the Sunset Strip,” if you are interested in the celebrity scene, will make your jaw drop.