Maxed Out: Hard Times, Easy Credit and the Era of Predatory Lenders 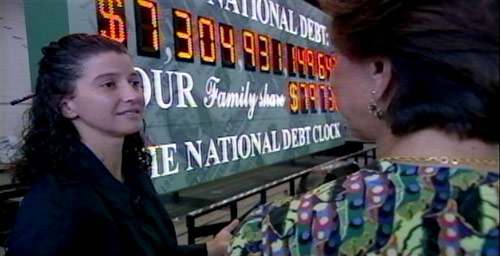 America may be the land of milk and honey for a few but, for most, it is a place of mounting debt with the credit card companies offering trillions (yes, trillions!) of dollars to any and all takers. The result is the rising personal debt for millions of Americans, a debt that they may never pay off. Documaker James D Scurlock and company examine this spiraling credit crisis in “Maxed Out.”

'Lifestyles of the Rich and Famous' host Robin Leach says that there is a natural inclination to look upwards, to yearn for an opulent lifestyle and a Nevada housing developer describes how homes continue to get larger and larger, even as she describes the questionable financing used to build her own home. Producer/director/writer James D. Scurlock posits that the United States is "Maxed Out." Back when the baby boomers were just becoming adults, it used to be the case that one had to show evidence of solid financial standing in order to receive credit, but beginning with the onset of the 80's 'me' decade of greed and ostentatious consumption, a sea change began. Credit card companies and the banks behind them realized that their highest profits were made by preying on those least likely to be able to pay more than their minimum balances and it was even better if they'd once declared bankruptcy - proving a taste for credit. Harvard Professor Elizabeth Warren backs all this up with anecdotes and statistics, calling consumer lending *obscenely* profitable. Scurlock gets a couple of debt investors talking about inside contacts at Providion admitting that the company often held and even shredded payment checks in order to cash in on their lucrative late fees. While that company was charged, most of the other practices used are absolutely legal. The U.S. Government itself is guilty of the habit of 'surfing,' or paying off debt with more debt. Scurlock outlines how Presidents from Reagan through Bush have raiding Social Security coffers to pay off other debt and advises that currently the United States spends more on interest than on homeland security, education and healthcare combined. What was once the richest country on earth now owes more to foreign nations than it is owed. More shocking is the personal toll the filmmakers outline. There are the easy shots of mentally disabled and the dead receiving credit card offers, but then there are the hard truths of poor Southern Blacks bilked into signing on with a new mortgage company for lower payments only to discover their payments are now much higher and that they are in danger of losing their homes and public humiliation. Public humiliation is a tactic often used by debt collectors. Worse are the credit suicides. We meet a young couple who relate how the wife's mom disappeared right before the debt collectors came a'calling. They're terrified she may have driven into the river. Two mothers talk about their failed attempt to ban credit card companies from college campuses (the lenders apparently supported too many political campaigns). Eighteen year olds making minimum wage holding part time jobs are courted with gifts to sign on the dotted line. Both women's kids, overwhelmed by the debt they had accumulated, hung themselves. One of them had acquired twelve different credit cards. Scurlock makes a strong case against the current credit craziness, jumping from kitschy educational films to professionals like Nashville radio's Dave Ramsey and the always passionate and illuminating Warren and those who profit from the many victims trotted out before us. One alarming statistic after another makes his point, culminating with the national debt clock, counting in the trillions. "Maxed Out" may not always stop to explain certain financial practices (I, for example, have a hard time getting my head around the concept of purchasing debt), but it couldn't be clearer that the average American has been seduced by consumer creditors who are more than willing to bleed them dry.

Scurlock (not to be confused with Morgan Spurlock of Supersize Me” fame) takes a similar tack with his in depth study of American debt. The numbers that he bandies about – 10 million Americans filed for bankruptcy between 1994 and 2004; each American family owes $90000 to the national debt; the majority of American society is in constant debt; the average American family owes over $9000 in credit card debt and pays out over $1300 per year in finance charges and fees; etc. – are staggering. The credit business is a multi-trillion dollar industry that relies on its customers to minimize their monthly payment to allow the companies to make maximum profits. The house of cards infrastructure this mentality foments is frightening in its potential, and possibly imminent, disaster. Maxed Out” provides a wealth of information on America’s love for debt. But, it also gets up close and personal on how the weight of this debt can break a person, exemplified with the story of a woman, secretly in huge credit card debt, who disappeared rather than face her shame. Her story, and its aftermath, is a sobering note in a sobering film. Scurlock, with his crew of filmmakers and researchers, does a deft, clear cut job in explaining the credit crisis and how it affects us all. The hope is, I think, that the film will make you think twice about spending money you don’t have. That’s good advice for many.