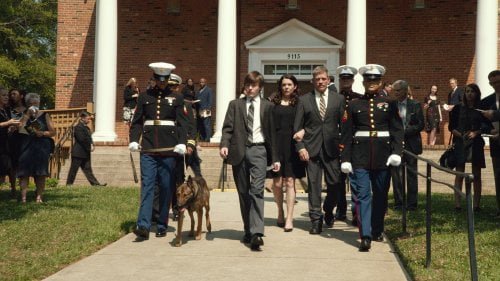 The Wincott family – dad Ray (Thomas Hayden Church), mom Pamela (Lauren Graham) and younger brother Justin (Josh Wiggins) – have lost their son/brother Kyle (Robbie Arnell) to an IED in Afghanistan. Kyle’s best friend, his K9 Marine companion, a Belgian Malinois, is scheduled to be euthanized as unfit, but the Wincotts, especially Justin, want to keep a part of Kyle alive and they try to save “Max.”

With his brother Kyle (Robbie Amell, "The DUFF," TV's 'The Flash') having followed in his father's footsteps as a heroic Marine, Justin Wincott (Josh Wiggins, "Hellion") feels like he'll never live up, sulking behind the controls of the video games he bootlegs and sells to his buddy Chuy's (1 Rebel Nation vocalist Dejon LaQuake) scary cousin Emilio (Joseph Julian Soria, "Camp X-Ray"). But when Kyle is killed in the line of duty and his old buddy Tyler (Luke Kleintank, TV's 'Gossip Girl') returns from the front twisting the truth, Justin will find achieve his own potential after reluctantly taking responsibility for his brother's extraordinary but battle scarred service dog "Max." A corny, everything-but-the-kitchen-sink family film that's too violent for small kids, "Max" succeeds largely on the merits of its amazing Belgian Malinois (Carlos, trained by "Marley & Me's" Mark Forbes). Inspired by cowriter Sheldon Lettich's ("Double Impact") love of the breed and military working dogs, director Boaz Yakin ("Remember the Titans") overstuffs his film with themes of fathers and sons, Patriotism, Texas border town racism, puppy love, Mexican drug cartels, black market weapons, corrupt law enforcement, extreme biking, extreme betrayals and an angelic mom who transcends it all. When we first meet Justin, he's ripping a video game for income his dad doesn't know about, rebelling against working for Ray Wincott's (Thomas Haden Church, "Sideways") struggling storage facility for $8/hr. When mom (Lauren Graham, TV's 'Parenthood') and dad Skype with their son in Kandahar (and his dog Max), Justin doesn't even interrupt his game. Then the dress uniforms arrive. On the day of the funeral, Max's original local trainer Sergeant Reyes (Jay Hernandez, "Crazy/Beautiful," "Hostel") arrives with the dog, who is desperate to reach Kyle's casket. But when Pamela learns Max is so affected by PTSD that he will be put down, she insists the family must take the dog, the last link to her son. Both Ray and Justin are wary. Things take a dramatic turn when Justin meets Chuy's cousin Carmen (newcomer Mia Xitlali), a young upstart who happens to have a way with dogs (she rescues Chihuahuas). Soon Max is responding to commands and Justin is bonding with the dog. But then Ray, who intimidates Justin's Mexican American friends, starts to sidle up to Tyler, whom we've already seen has reason to want Max gone and whom Tyler has learned is lying about just why he's home. Seems Tyler's in deep with Emilio as well, on a far more insidious level, and Max's very nature is being called into question just as the Wincott family is about to be plunged into very dangerous territory. We, of course, know from the beginning just what went down with Kyle, Max and Tyler in Kandahar, but Tyler's character is problematic, acknowledged as Kyle's 'oldest friend' yet seemingly a sociopath who will stop at nothing to earn an underhanded buck. Not only that, but he's in cahoots with the town's Deputy Stack (Owen Harn, "Homefront"). Luckily the Wincott family has been well cast, Amell a handsome hero, Haden Church just gruff enough to believably pull out empathetic reserves when the going gets rough, Graham the small town Everymom. Wiggins is solid as the resentful kid who opens up to a responsive animal and a pretty, rebellious newcomer. LaQuake is a good comic foil. Yakin and his cinematographer follow some dynamic action scenes of the kids biking through some pretty rough, wooded terrain, but come the climax, cell phone logic flies out the window. The film's epilogue would be comical in light of what preceded it were it not located at Kyle's grave. "Max" isn't a bad film but it is hokey. As a tribute to the working dogs of the military and their handlers, though, it shines a fine and deserved light. Grade:

Director/co-writer Boaz Yakin (with Sheldon Lettich) has created a mediocre, clichéd tale of family, loyalty, corruption and stolen arms deals – except for one thing: Max. I’m a sucker for hero dog movies and have been since I was a kid watching “Lassie” and “Rin Tin Tin” and the titular pooch fits the bill. At its heart, “Max” is a boy and his dog tale but with a twist that makes the film more interesting. Max is not just a dog. He is a highly trained war dog that has done a tour of duty in Afghanistan with his handler, Kyle. Max has suffered the cost of war, as many front line troops do, exposed to danger, gunfire and RPGs and, like many of our troops, is a victim of PTSD. “Max” is about his rehabilitation and acceptance into normal family life. This is where the film is most effective. Aside from the good part of “Max,” the rest of the story involves an obviously not a nice guy former comrade of Kyle’s, Tyler (Luke Kleintamk) who comes to town. You know he is a bad guy because Max knows he is and, through extension, so do we. This plot line, complete with the corrupt local cop (Joseph Julian Soria) and a cache of stolen weapon, has been done better many times before. So, we have a mediocre film with one and a half good story threads – besides a boy and his dog, there is the cute smart friend, Carmen (Mia Xitali), who helps Justin rehabilitate Max, and introduces the budding romance – a good cast and a great hero dog. There is a great deal of violence, dog fights especially, that put this beyond younger audiences. Older kids and anyone who loves dogs will get something from “Max” but not quite enough.