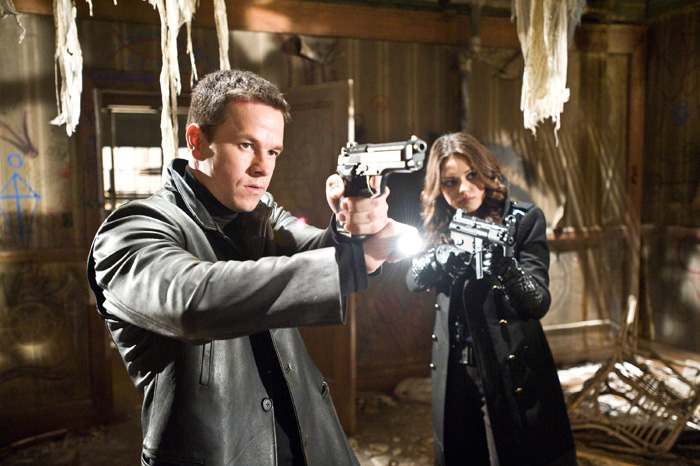 Yet another video game is brought to the big screen as a feature film. This time, widowed cop Max Payne (Mark Wahlberg) is hell bent on justice at all cost as he investigates a string of brutal murders in NYC. Joining him in his quest is assassin Mona Sax (Mila Kunis), who is out to avenge her sister’s homicide. To their shock, they fall smack in the middle of a war between good and evil in “Max Payne.”

Based on the popular 2001 video game, “Max Payne” is what it is: an action packed thriller that, at first, leads you to believe that a supernatural battle between the forces of good and evil is in the offering. However, as the plot unfolds, it becomes clear that the mystical world is not the fighting ground between good and evil. The good and the bad are mere mortals with justice being sought by the former and plain greed the agenda for the latter. As we get to know the troubled Max Payne, we find that there is more to his mission than just uncovering the perpetrators of the recent string of heinous crimes. His wife and child were murder several years before but the case has never been solve. Max gets himself assigned to the Cold Case File where unsolved crimes go to rest without resolution. He scours the dead files to try to find a clue, even miniscule ones, to locate his tiny family’s murderers. The mortal-based greed is based on a secret military contract to create a drug that would make super soldiers. But the test results are not predictable ­ some do become uber troopers but most succumb to horrible hallucinations of giant wraith-like creatures and insanity. “Max Payne” becomes a revenge flick that drives frenetically through its copious shootouts and slow mo action. There is more than a nod to actioners like “The Matrix” in the execution of the action. The film squarely hits the bull’s eye as it takes aim at the 18-30 video game obsessed male audience. The solid cast, led dourly by Mark Wahlberg, includes Beau Bridges, Donal Logue, Chris “Ludacris” Bridges (no relation to Beau), Chris O’Donnell and Mila Kunis as the tough femme assassin, Mona Sax. Sax is nice eye candy but her role during the proceedings is sketchy until she is brought back near the end. Olga Kurylenko, soon to be the latest Bond Babe in “Quantum of Solace,” has the short, sexy bit of screen time as Mona’s doomed sister. Director John Moore and screenwriter Beau Thorne adapt Sam Lakes hit vid game and play loose with story logic. But, the fans attracted to “Max Payne” will readily leave any disbelief by the doors as the action ramps up. Techs are very good with the seen-it-all-before shootouts done with skill, even if clichéd.