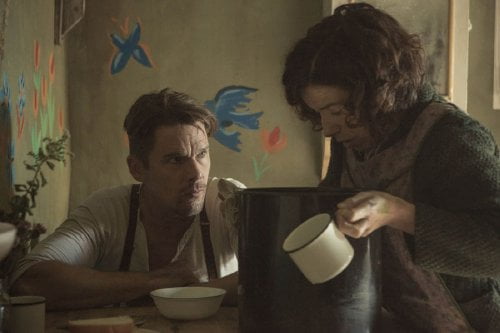 In 1938 in the small town of Digby, Nova Scotia, a thirtyish woman with hunched shoulders, a drooping head and an uneven walk was largely shunned by the locals. Her brother, Charles Dowley (Zachary Bennett), had entrusted her care to their strict Aunt Ida (Gabrielle Rose, "A Dog's Purpose"), who treated the woman like a child. Bristling with the need for independence, one day she walked to Marshalltown, an ad for a housekeeper clutched in her pocket. The severe and thrifty Everett Lewis (Ethan Hawke), who lived in a 10x12" shack with no modern amenities, was not convinced, but the only person to answer his ad was "Maudie."

Based on the true story of Naïve folk art painter Maud Lewis (screenplay by Sherry White), director Aisling Walsh (TV's 'An Inspector Calls') celebrates not only an artist finding her voice and, even more miraculously, her audience, but the unlikely devotion that grew between two societal outcasts with opposing temperaments. The film can be sad, even brutal at times, yet also a touching testament to love's endurance and the joy one can find in one's own backyard. Walsh has meticulously set her film in a very specific time and place, one which both Hawkins and Hawke exude through their very pores as complementary opposites. When Maud (Sally Hawkins, "Happy-Go-Lucky") first shows up at Everett's, the taciturn man who scrapes by selling scrap and the fish his buddy Frank (Billy MacLellan) catches harshly asks what he's to do with 'some crippled up woman.' Maud doesn't know what to make of the rejection, but when she mentions the rocks thrown at her by local boys, Everett reveals civility by escorting her down his dirt road. Relating the story at the local orphanage where he grew up and now volunteers and eats some meals, he's admonished to give Maud a chance. When he pulls up at Ida's in a run down truck, Maud's packed and in it before he knows what hit him. Things do not go smoothly, Maud receiving no instruction. Everett complains about her efforts yet seems admiringly taken aback when he learns she's killed a chicken to prepare his meal (it's a bit hard to tell with Everett). Maud begins to paint on the walls of the shack, losing herself in what Everett refers to as 'fairies,' but which she informs him are flowers and trees and the chicken she can see from the window which frames the world for her. She's doing what he asked - making his place look nicer. As there is little space in his home, Everett informs Maud she'll have to sleep upstairs, sharing his bed, which she does, awkwardly shielding herself with bedclothes. In town one day, she runs into her aunt, who tells her niece she's shaming the family, talk of her 'love shack' all over town. One day, Maud answers a knock at the door and is astonished to see Sandra (Kari Matchett, TV's 'Covert Affairs'), a sophisticated New Yorker with a nearby vacation home on her doorstop. Sandra paid Everett for fish which were never delivered and Maud promise to follow up. Sandra notices her paintings and Maud notices her 'snazzy shoes.' Sandra begins to purchase postcards from Maud, then commissions a painting to be sent to New York, a deal Maud ensures includes her shipping cost. Everett marries Maud, who's grown to love him, and his house is transformed into something out of a fairy tale, flowers painted on its windowpanes, shutters and exterior walls. A painted sign advertising paintings for sale goes up, a newspaper article brings tourists and a cottage industry is born. The brother she hasn't seen in years shows up, Maud dismissing him quickly with a family upcharge. Vice President Nixon's office sends a letter to procure a painting. The irrepressible Hawkins creates a beautiful spirit in an increasingly twisted body (Maud suffered from juvenile arthritis from the age of four), still painting when she needs both arms to hold a brush. She's a simple woman only craving kindness and the freedom to express herself. Hawke is equally impressive, capturing the essence of a crusty rural loner. When a Dowley family secret is revealed, creating an obstacle in the marriage, Hawke must woo his wife, and the actor makes us privy to Everett's own wonderment at his feelings, his hesitant affections touching. The two's marital squabbling revolves around Maud's fight for equal footing, Hawke playing Everett's eventual understanding like the lifting confusion between slumber and alertness. Walsh went to great pains to recreate the Lewis home (the original home has been moved to the Halifax art museum), shooting in sequence to show its progression. The filmmakers never address just how much Maud's paintings benefited the couple financially, nor why they continued to live in such cramped quarters, instead focusing on the relationship. Maud's paintings are recreated, winter scenes with autumn leaves, Everett hauling logs, three black cats. Canadian artists provide the music with Cowboy Junkies' Michael Timmins's simple guitar score, Mary Margaret O'Hara's 'Dear Darling' accompanying Maud's painting reverie. Grade: